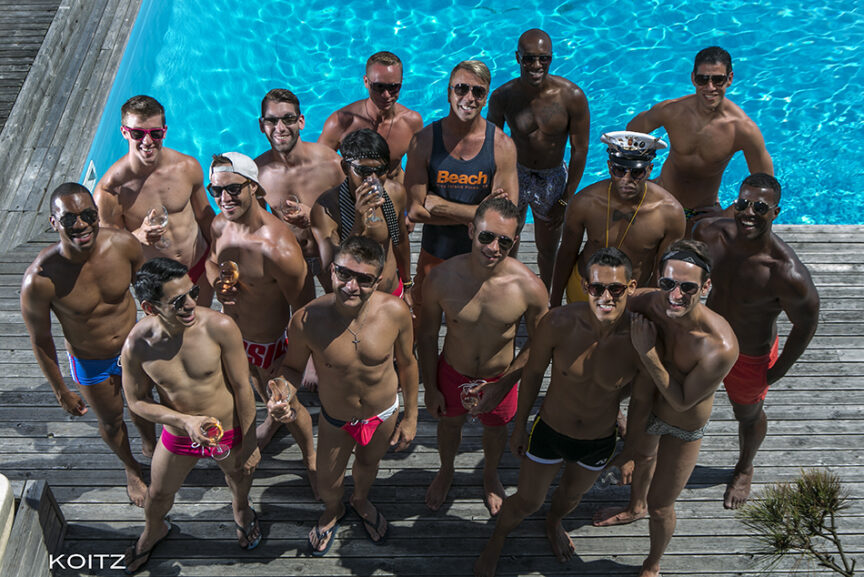 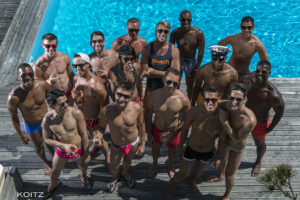 Robert Bonanno (in center wearing tank) educating the younger frequenters of the Pines about how the community became what it is today. (Photo courtesy of KOITZ/Fire Island Pines Historical Preservation Society)

This past Saturday marked the 40th anniversary of Beach, commemorated in the Fire Island Pines with a panel discussion and a performance. Beach, the most elaborate disco party Fire Island has ever seen, began with the need for a new fire truck.

In 1979, the Pines Volunteer Fire Department needed a new truck, an expense they couldn’t afford. Thankfully, Jimmy Meade and Ron Martin had recently attended Sunrise, another extravagant party, and came up with the idea of hosting their own revolutionary Fire Island bash as a fundraiser for the fire department.

Meade and Martin worked with Scott Bromley and Robin Jacobsen to plan the event, culminating in a stellar evening. On Saturday, July 14, 1979, the Fire Island News’ Aaron Biller wrote, “The evening was party perfect; a bright full moon complemented the array of disco and theatrical stage lighting.” On that night, approximately 3,700 people were in attendance to celebrate the magic of the Pines and to help fund the purchase of the fire truck at $20 per ticket. The night was attended by Farrah Fawcett-Majors, Lee Majors, Andy Warhol and the Village People. Performers at the event included The Ritchie Family, Asha, France Joli, and Bonnie Pointer, setting the stage for future big name performers who frequented the Pines.

To commemorate the momentous occasion of Beach’s 40th, the Fire Island Pines Historical Preservation Society hosted a panel, called “Boardwalk Talk,” featuring Ron Martin, Scott Bromley, France Joli, and Walter Boss. Following the talk was a classic disco tea dance, Souvenirs, hosted by the Historical Society each year and featuring DJ Robbie Leslie. Following the tea dance was a special performance by France Joli who sang “Come to Me” as a tribute to the debut of her song at Beach 40 years ago.

The discussion highlighted the history of Beach and the influence the party has had on the Pines. President of the Fire Island Pines Historical Society Robert Bonanno, who played a large role in organizing the event, frequently refers to Beach as “the party that started them all.”

Bonanno first had the thought of hosting a panel after reflecting on the Historical Society’s annual Souvenirs event. Souvenirs is a classic 70s disco weekend that pays tribute to the Pines history of elaborate parties. Bonanno came up with the idea of incorporating a panel discussion with the creators of Beach and combining the events for one historical celebration that also had great potential as a moment of both education and remembrance. “Milestones like this are meant to be celebrated; I knew when this was coming up it had to be celebrated,” Bonanno said.

He reflected, “There was a great camaraderie with the people on the panel who then got to talk and remember it together. Here we are 40 years later and we’re getting to debrief what was it like for everybody, what was it like after. It was very rewarding.” The event brought together both folks who had attended Beach and those who have attended the parties Beach has influenced. Bonanno wanted the impact of the event to spread knowledge of the Pines history, particularly by educating the younger frequenters of the Pines about how the community became what it is today.

Bonanno noted the importance of Beach and the panel he considers a teaching moment. “It has unbelievable importance for me, and as I saw last weekend it has importance to many people. The people who created it look at it as a milestone of their life. I am so honored to have put this into a book so that they can always be remembered. It changed the trajectory of [France Joli’s] life and her career. The fact that she comes back is major. A lot of bonds and relationships formed that were not about blood.”

The celebration of Beach is ultimately about so much more than a party or a fundraiser. It symbolized a moment in the history of the Pines where the community came together to create something bigger than itself, a moment Bonanno thinks has defined the community ever since. He noted, “I think the whole experience with Beach helped to put that history in front of people. We have to preserve this history. We live in a world with climate change and hurricanes and storms, and I hope this never comes to pass, but one day we might be in a world where we say once upon a time there was a place called Fire Island. And by preserving this history we get to pass it on to future generations.” Bonanno’s work through both the Pines Historical Society and this panel connected the Pines’ past with its future.