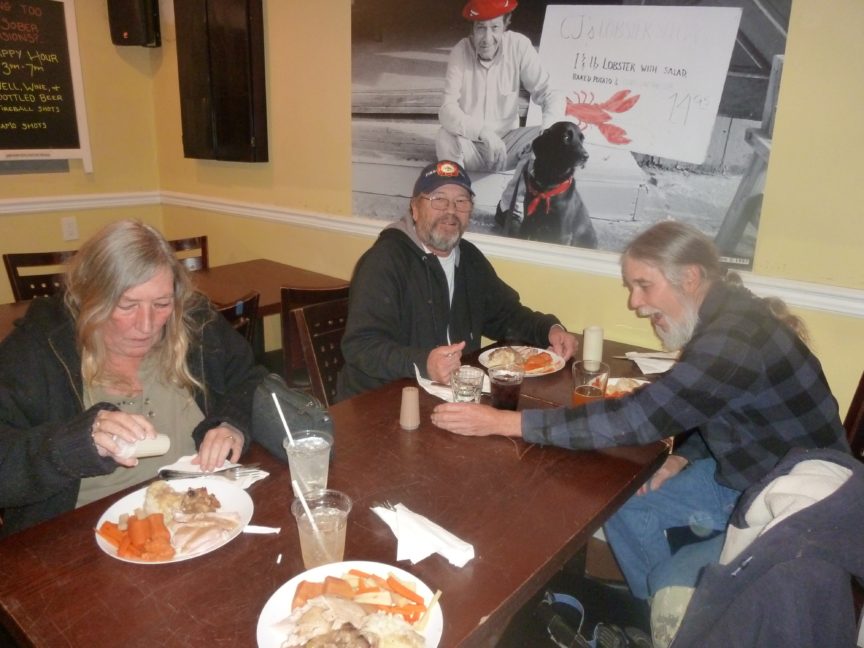 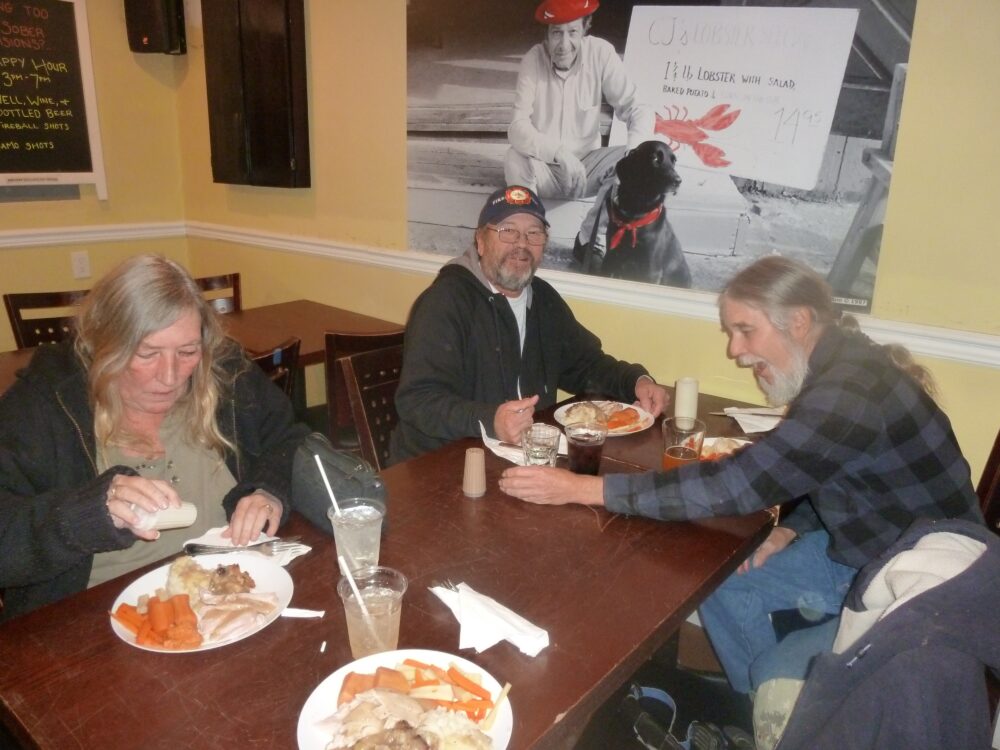 GOBBLE IT UP: Folks enjoy their CJ’s turkey dinner as Gio still looks on, (Photos by Shoshanna McCollum

By Shoshanna McCollum. The workers came for lunch, the residents took an early dinner, even the beach bikers made an appearance and stayed for a drink. Pre-Thanksgiving at CJ’s Restaurant & Bar is a day seeped in Fire Island tradition. On the Wednesday prior to Thanksgiving, before everyone goes their separate ways to celebrate with their respective families, they gather here throughout the day for a turkey dinner with all the trimmings, compliments of CJ’s.

“We will probably serve about 200 pounds of turkey on Wednesday,” explained CJ’s Co-owner Chris Mercogliano. “Rob Weber and Chef Brendan will spend two to three days preparing everything. It’s a small community and we like to show our appreciation to the residents, village employees, and everyone else that supports us all year. It seems everyone leaves happy. We are proud to be part of this tradition started many years ago by Gio.”

Gio (John Giovanni Palmaro, Jr.) is remembered as CJ’s founder, opening the legendary Ocean Beach bar and Italian restaurant in 1971. The establishment would evolve to become Fire Island’s only year-round dining establishment with a bustling bar crowd in the summer, which transformed into a quiet eatery with checkered tablecloths after Labor Day, then doubled as a bodega after Columbus Day. Part of this predicable holiday schedule was Gio’s Thanksgiving dinner. Those who had no where to go on Thanksgiving were welcome here, as were those who made a special trip on a late season ferry as word spread about this holiday dinner, and it gained local notoriety.

CJ’s Thanksgiving tradition fell into ambiguity after Gio’s death in 1998. The custom became fragmented as owners that followed lead very different lives from Mr. Palmaro. Thanksgivings at CJ’s all but became fables that were slowly fading into the background, chalked up as another casualty of Fire Island progress. The tradition was revisited after Chris and Laura Mercogliano took over CJ’s in 2013. Such a revival did come with a date change, so staff can be with their families, and as CJ’s is closed only two days a year, no one can begrudge this.

These days a large black and white photomural of Gio now hangs in CJ’s, still watching over everything. He certainly would have approved of all that transpired last Wednesday. The turkey was succulent, served with a generous heap of mashed potatoes and gravy, along with yams, carrots and parsnips to keep the dish healthy and colorful. While this was a free dinner, no detail was spared. This year also offered a surprise – Fire Island coffee to finish off the hearty meal – a subject we expect to be discussing again in the near future.

Last year CJ’s actually saved the day for one family celebrating the holiday at their Fire Island home, when raccoons absconded with their thawing turkey. Problem solved as the kitchen crew agreed to sell them an uncooked bird that was “waiting in the wings” as bar patrons cleverly quipped, recalling the story anew once again.

Perhaps most importantly Wednesday, Nov. 21, was about friends and neighbors connecting. Barbara and Martin changed their plans for a Thanksgiving at Barbara family homestead in New Jersey once they learned of the next day’s chilly weather reports, and joined us at the table. Martha Mason and grandson Mika stopped over, mentioning their plans to make the journey to Pennsylvania early the next morning. We met Margie Canonico and her children; the family purchased their Ocean Beach home last year and “are loving it.” Finally Tim O’Rourke at the bar, with his brother Danny at his side, proudly announced the Fire Island bachelor gathering that would be held at his apartment the next day. Indeed during times of turmoil, Fire Island still offers a place of solace, as well as a Thanksgiving tradition representing a circle that remains unbroken. 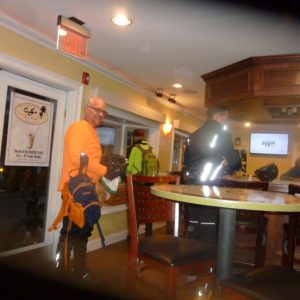 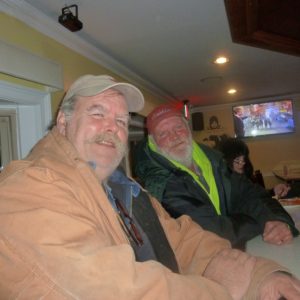