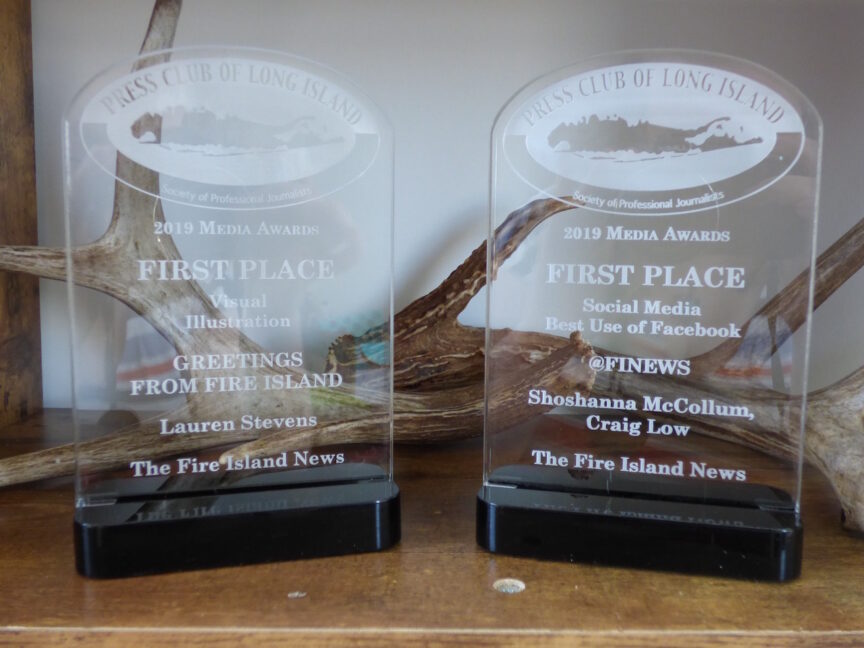 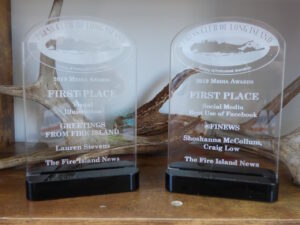 Press Club of Long Island (PCLI) 2019 Media Awards were announced at their annual dinner event, held at The Watermill in Smithtown on Thursday, June 6, 2019. Fire Island News (FIN) picked up two first-place awards that evening, presently making it a total of eight media awards secured by this publication since 2016, three of which rank first place. 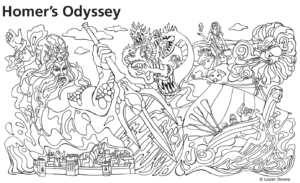 Artist Lauren Stevens won top honors in the Visual/Illustration category for her adult coloring pages, which started gracing our publication last summer. Before coming aboard in 2018, FIN Publisher Craig Low took note of the adult coloring book trend sweeping the nation, but wanted content specific to our region. Stevens was the perfect candidate. The Parsons School of Design alumna is known locally as a working artist on Fire Island, overseeing the graphic design needs of local establishments like The Hideaway and Fire Island Animal Welfare Society. Stevens also is one of the co-founders of MUSE, a publishing company devoted exclusively to adult coloring books, which are sold on Amazon and at Barnes & Noble. Inspired by themes as varied as the Sunken Forest, Fire Island Lighthouse, and Trangleball® she creates original works in this publication exclusively for Fire Island News. Upon being advised of her first PCLI award, Stevens appeared stunned, but it came as no surprise to us, we knew she had the right stuff all along.

The second award is shared by FIN Publisher Craig Low and Editor Shoshanna McCollum in the Social Media/Best Facebook category. This one came as something of a surprise to us, we saw ourselves as a dark horse candidate. Going in we knew we were competing against considerably larger publications that operate year-round on a full-time basis, but in placing our entry we made a simple notation: “We publish biweekly from Memorial through Labor Day weekends, and use this page to keep our readership engaged the rest of the year through shared photographs, special reports and aggregated news items from other publications that we believe will be of interest to our followers.” This is Mr. Low’s first PCLI Media Award, and McCollum’s fourth PCLI career win, including FIN as well as other local publications.

“Whoever thought I would win a prize for being on Facebook too often?” McCollum joked on her personal Facebook wall. “Take that you page trolls!”

Press Club of Long Island is a chapter of the Society of Professional Journalists (SPJ) – one of the largest professional SPJ chapters in the country. Its mission includes protecting and advocating for First Amendment rights, furthering ethical standards, and offering ongoing training opportunities.