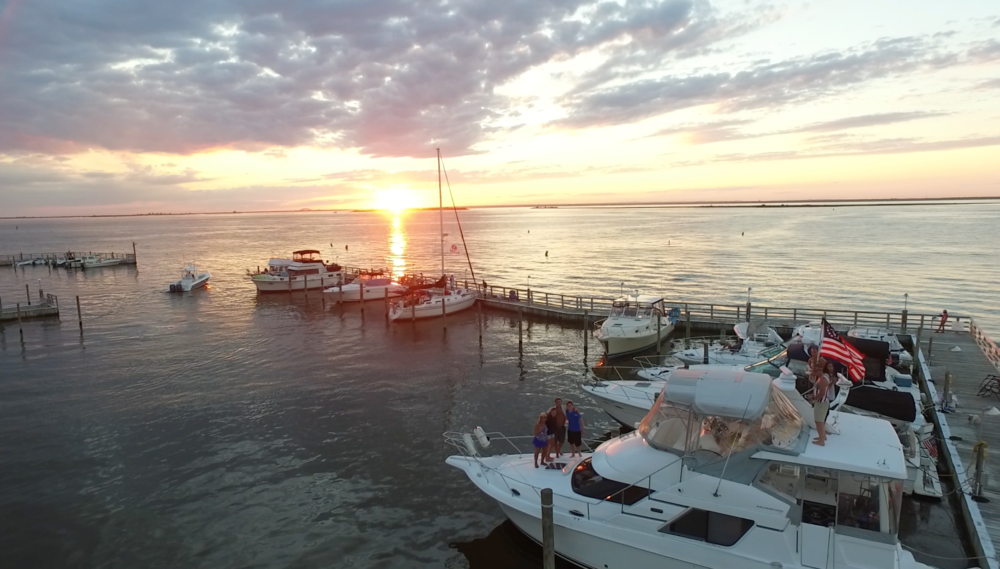 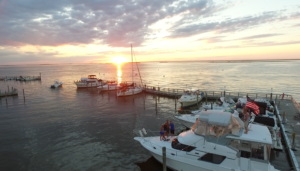 The view from the top of the Fire Island Lighthouse is like no other – you see the ocean horizon line to the south, the Great South Bay to the north, and a long strip of land to the east that seems as thin as the lighthouse itself. This view used to only be seen from the top of the lighthouse, or if you looked on Google maps, but not if you have a drone.
This Fourth of July at Atlantique the crowd was not the only thing that was buzzing, on the west dock you could hear a buzzing sound coming from the sky. As you looked toward the buzz you’d see a “Spy Kids” looking device, and a guy holding what looked like a video game controller, it was a drone.
The owner of this drone is Ryan Wood, a visitor to Atlantique from New Jersey. He bought the drone last year and has learned how to operate it like a pro. He’s brought it with him to many places and has experimented during different times of day to help him figure out the best angles.
“I have visited Fire Island a handful of times now, and it is by far my favorite place to fly the drone,” Ryan says. “It’s amazing to see the long thin strip of land and how close the bay is to the ocean.”
He claims that the best time of day to use it is what he calls the “golden hour” – aerial shots with the sunset in the background. “Really brings it all together,” said Ryan.
Although most Atlantique folks seemed to enjoy Ryan’s drone, and were interested in his footage, there are some conflicting views about drone use in today’s society.
“I believe drones can be an intrusion of space,” said Shane Lonigro from Oakdale. “You should not have to worry about drones flying into your backyard taking pictures of private property. This is a higher government issue dealing with controlling the number of drones out there, and making sure people have a permit to use them.”
The Federal Aviation Administration (FAA) regulates the use of personal drones. They must be registered with the FAA, and the owner must get a commercial drone license before flying it. This license consists of passing a written exam. Some of the rules include keeping the aircraft in sight (visual line-of-sight), flying under 400 feet, flying during the day, flying at or below 100 mph, yielding the right of way to manned aircraft, and never flying it over people or from a moving vehicle.*
The regulations are in place to curb illegal, and possibly dangerous, use as well as to respect the
privacy of others.
Make no mistake, a drone can be a fun tool to score that photo no selfie-stick could ever capture, but this is still a very new and emerging technology. Over time this issue will evolve. For now, Ryan will continue to visit Fire Island and renew his drone license when needed in order to capture his golden hour photos.
*Editor’s note: More information on personal drone use can be found on the Federal Aviation Administration website www.faa.gov. Additionally, the National Park Service (NPS) Policy Memorandum 14-05 restricts takeoffs and landings of unmanned aircraft in NPS units across the country.