The Concert of the Summer!

The speakers turned up high as the guitar riff echoes throughout the marina. As the sun drifts closer to the horizon the packed ferry pulls in with excited fans ready for a good time. It’s Saturday night, Aug. 6, and the best event of the year to take place at Atlantique Marina is about to begin: Rich Mahogany has returned for their ninth season.

Rich Mahogany brings more than just music when they come across the bay. They bring an atmosphere filled with smiles, laughter, and an energy that makes you want to dance all night long.

There is Greg Rabin working the microphone, Mike Dickson tapping the drums, George McRe- mond playing the bass, Bryce Larson and Tim O’Connor stringing their guitars, and Rick “The Professor” Krabak on the keyboard. All are having a great time.

The view looks great, but what some don’t know is all the people who have kept the band together for the past nine seasons on Fire Island. First and foremost are the band member’s wives: They are the ones packing the coolers, passing out the water or beers and supporting their husbands while they do what they love. Another big contributor to the band is the Town of Islip for letting events like this Atlantique concert happen. Of course snack bar concessionaire Gavin Melton originally put this concert together nine years ago. However it is the loyal fans that follow them to all the performance venues throughout Fire Island that are the key to this band’s success. 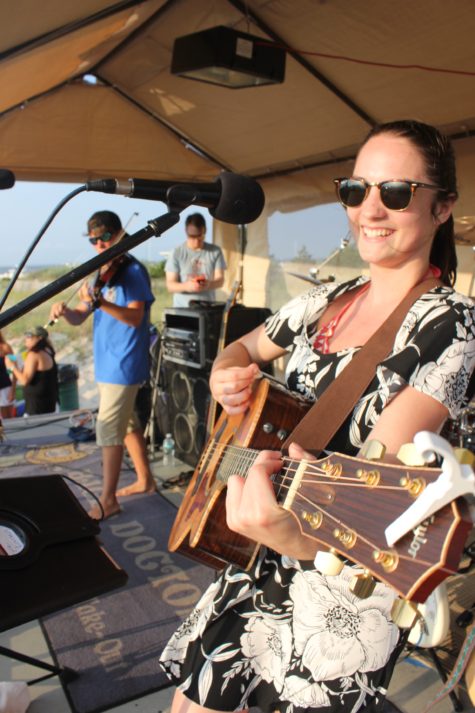 This year’s concert was a little different from year’s past, as Haley Mae-Campbell took the stage for the first time on Fire Island in between the first and the second set. Haley is a 19-year-old musician, vocalist, and songwriter who drove up from Charleston, South Carolina just for this event. Haley has been a musician her entire life and chased her dreams all the way to New York. She was born on Long Island, so it was as if she was coming home and Rich Mahogany was more than excited to be able to help out a rising star. Haley and her three-piece band have been together for two years now, and are currently on a performance tour through New York.

Alongside her on stage is Ryan Gilmore, who adds a unique sound playing the violin, and Ben Sewell playing the drums. All together their music is a cross between pop and rock with original lyrics that kept everyone dancing in between the main sets. Haley debuted her first album, “Hugs & Disses” back in 2011, and plays regularly in Charleston at local venues.

This was her and her band’s first experience playing on Fire Island, and they were truly amazed by the laid back atmosphere of the place. Mostly the whole crowed was in bathing suits straight out of the ocean and ready to enjoy some good music. Haley even played her set in just a beach coverup over her bathing suit. 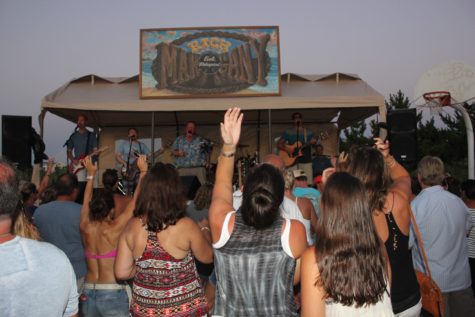 As the sun set the crowd got excited and Rich Mahogany had the whole marina dancing. There is nothing like a good concert on Fire Island to start off the month of August.

Go check out Haley Music on Spotify, keep updated with her on Instagram and maybe even check her out while she is still on tour in New York.

Kirsten can be reached at atlantique@fireisland-news.com with any news and happenings you wish included in her column.