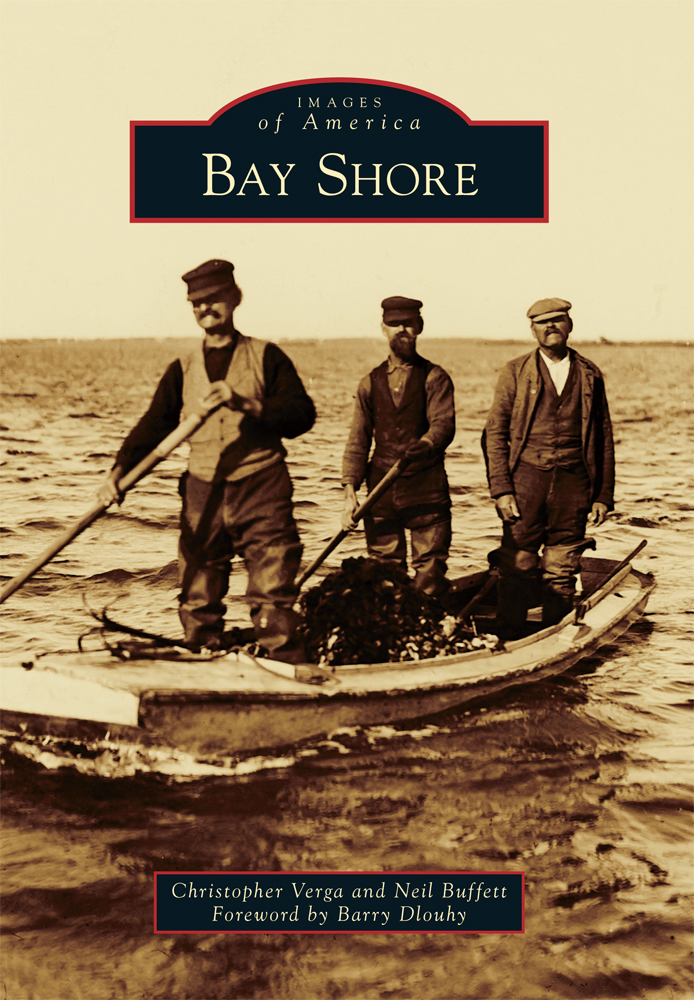 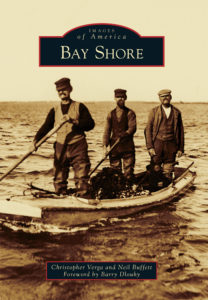 If all Bay Shore means to you is going to the Fire Island ferry, please pick up a copy of “Images of America – Bay Shore” by Christopher Verga and Neil Buffett, local historians and professors of American history.

The pictorial account of this old and evolving community – settled by the Secatogue Indians in 1708 – is courtesy of the Bay Shore Historical Society and the authors’ own more recent collections. Included are photos of the slaves who helped maintain its early agricultural economy, the town’s once sizable Klu Klux Klan membership, as well as a print showing an 1875 abandoned schooner in the waters of the Great South Bay. Its masts crusted over with ice, it seems the crew, to prevent being washed overboard in the storm when the sea got rough, lashed themselves to the sails, only to be discovered days later “frozen in the rigging of the ship.”

On the lighter – and tastier – side is Entenmann’s Bakery. (Their Chocolate Chip Crumb Loaf my all-time favorite.) Who knew they were the inventor of the ubiquitous see-through cake box? They originally dispatched their tasty treats to the locals by horse-drawn wagons from their Bay Shore bakeshop. When it burned down in 1961, Entenmann’s then occupied a 550,000 square-foot factory on Fifth Avenue right up through 2014.

A short, comprehensive narrative at the start of each chapter includes Bay Shore’s early history, the development of the fishing and boating industry – the oyster industry alone fished out 70,000 barrels per year in the mid-1880s – the emerging resort industry, the hamlet’s decline in the 1970s and its present-day revitalization.

In the late 19th and early 20th centuries, the beautiful waters, the cooling summer breezes and natural wonders of the Great South Bay attracted a moneyed crowd of yachtsmen and the New York elite: A.G. Vanderbilt; Frank Farrel, the first owner of the New York Yankees; and J. Dunbar Adams, a founder of the chewing gum industry, were among those who called Bay Shore home. Movie people brought art, music and theater and made the hamlet their vacation go-to that changed the face of the place from hardware stores and home essentials to tiny boutiques and country manors. Forty-room estates were not uncommon. Bay Shore boasted an opera house, and the Bay Shore Theater was known as the “most beautiful theater on Long Island.”

After the two world wars, Bay Shore drew fulltime residents who required services to support its growing population. New businesses came in and schools, roads and hospitals were built. In the early 1950s, Fairchild Aircraft expanded and became a presence there, employing thousands. And then came the late 1970s and Bay Shore’s downturn.

The authors cite how the general economic decline of the times, deinstitutionalization and the expansion of a shopping mall culture “chipped away at the once popular and vibrant downtown.”

Many former residents fled as discharged patients from nearby Brentwood’s Pilgrim State Hospital found their way to the downtown area. Without the necessary services to transition from hospital setting to mainstream, the former inmates took shelter in abandoned homes or lived on the streets. Open drug use and an increase in crime sent business packing, as residents who remained headed for the safer, newer, more elaborate nearby shopping centers, “a backslide that countless downtown shopping centers throughout the United States experienced at that time.”

But Bay Shore is a comeback kind of town, so with a strong spirit and plenty of attitude is now back on top again. Since the late 1990s, folks decided that a walkable downtown would be a good thing, and Bay Shore has been on a restoration high note.

As recently as July 7, Newsday called Bay Shore “a booming rental hub.” That’s not surprising considering that townhouse living, and the popular mixed-use development – business on bottom, residence on top – are under construction. Abandoned properties, now owned by the town of Islip (Bay Shore is part of Islip), are being considered for new construction, community centers and public spaces. The authors tell us that the federal government has pitched in, channeling $3 million in funds to rebuild damages done by Superstorm Sandy. An annual arts fair, kids’ programs in the summer, and a farmers’ market are part of the renewal efforts, all meant to revive Bay Shore as “the community known as the Heart of the South Shore.”

Available for sale at Willy Nilly in downtown Bay Shore, and Arcadiapublishing.com.

A little “pick me up” from a Brudda of the Island, now living on the West Side. Sure happy to see this going on! Thanks, Brudda Bill….and hats off to the Bay Shore Historical Society as well.