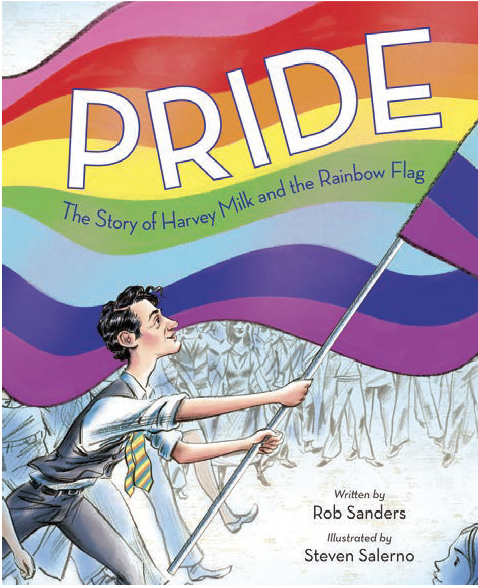 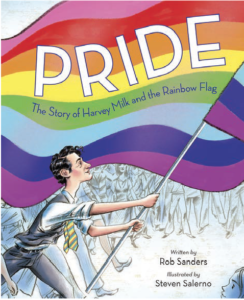 “Pride” The Story of Harvey Milk and the Rainbow Flag

Editor’s Note: Harvey Milk and Gilbert Baker are legends Fire Island can count as among our own: Milk, a graduate of Bay Shore High School is indeed a native son of Long Island; and Gilbert Baker frequented Cherry Grove often, especially in his later years.

Back in 2008, adult audiences saw Sean Penn as Harvey Milk in the movie “Milk,” and were deeply moved by his performance. Now young readers can learn about Milk and his inspiring story of courage and hope.

Award-winning author Rob Sanders presents Harvey Milk’s life as one of an ordinary man with “an extraordinary dream.” And what was this extraordinary dream of Milk’s? To give people, “even gay people,” equality and the hope that he and his friends would be able to “live and love as they pleased.” An idea held under wraps in the ‘70s, but one that Milk, a social activist, was determined to make public.

Days before one of the marches he and his friends had organized, Milk decided that the march needed a symbol. “Something to carry … to make people feel they’re part of a community,” and the rainbow flag – aka the Pride Flag – was born.

Young readers will see flag designer Gilbert Baker in jeans and John Lennon glasses, hunched over his pedal sewing machine, stitching up the panels of the original flag, “A rainbow as bright and unique as the men and women who walked behind it…”

From its beginnings in 1978, when the flag was cut, dyed and stitched by volunteers, to a 30-foot high, mile-long banner carried proudly by 10,000 New Yorkers in the City’s 1994 Pride Celebration, the flag has become a worldwide symbol of unity and gay pride, “printed on bumper stickers and T-shirts … hoisted onto lampposts … And once, on June 26, 2015, the White House was awash in the colors of the Rainbow Flag.”

A few lines of short text on 9-inch by 11-inch pages leave plenty of room for illustrator Steven Salerno to dip his brush. With bold, colorful drawings on glossy paper, Salerno spreads Milk across the open pages. Waves of brown hair, a prominent nose, brooding eyes and an open smile show a man who is sad and happy at the same time. His slight stature belies the purpose and resolve with which he goes about making his dream come true; there is nothing slight about Harvey Milk.

Dressed in the bell bottoms of the ‘70s, megaphone in hand, shirtsleeves rolled, he shouts to a crowd about gay rights as signs proclaim, “GAYS MUST GO” and “GOD SAYS NO.” But the negative reaction of the pack does not dissuade him and another spread shows him smiling, necktie aflutter and a campaign button announcing him as supervisor of San Francisco. He had won his crusade and was elected as one of the first openly gay persons to hold public office in the United States.

Salerno’s vivid palette darkens to suit the mood as a newspaper broadcasts, “MOSCONE, MILK KILLED,” just months after Mayor George Moscone put into law Milk’s ordinance that made it illegal to discriminate against someone because they are gay. “Their lives taken by a man who did not think like Harvey, or feel like him, or love like him.” With it all, Sanders stresses the ”HOPE” that Milk strived for, with dozens of miniature rainbow flags making up the letters of the word. Fun fact: The original had eight stripes, but over the years they became six.

Random House suggests ages 5-8 for readers, but since the text is grown up in content and vocabulary – no simplistic rhyming here – this reviewer suggests that readers 8 and over will get something out of it as well. For youngsters who feel themselves different from their peers, the story line might help them discover themselves in the world. “Pride,” could offer comfort to young children who might be struggling with their identities and serve as a pathway to conversation between youngster and parent or a sympathetic older sibling.

Stuart Milk, Harvey Milk’s nephew, founder and president of the Harvey Milk Foundation, carries on his uncle’s spirit, confident that, “This book tells a history that all children will cherish and that will inspire the next generation of hope-givers, our world’s youth.”

The work also includes suggestions for further reading, timelines and biographical notes, among them the historic date of June 26, 2015, when the United States Supreme Court ruled that gay and lesbians have a constitutional right to marry. Harvey Milk, be proud!

ATTENTION FIRE ISLAND AUTHORS: Are you, or do you know, a Fire Island writer who has published a book recently? Fire Island News is presently seeking titles to consider for the Book Review column. Authors, publishers and agents please email editor@fireisland-news.com and tell us a little bit about your masterpiece. Self-published and small press works are welcome.