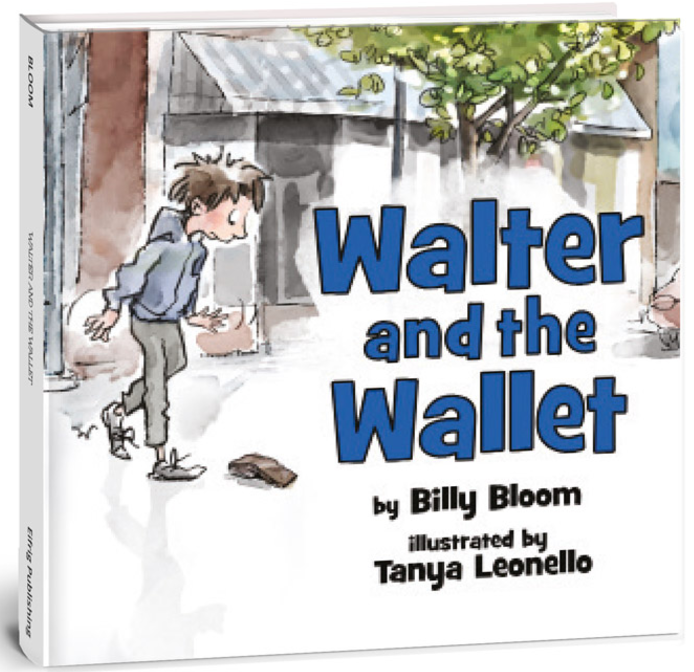 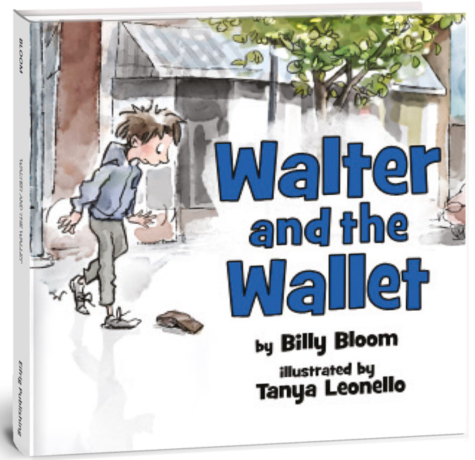 “Walter and the Wallet”

Things are not going well for young Walter Whippingdale. The girl he likes has eyes for another boy, and Walter struck out in a ballgame too. He broke his watched and watched a pimple on his nose turn into “a big red blotch!” Add a glob of mustard in his eye and you’ll have an idea of his mess of a day. But wait! What’s that on the ground on his way home from school? Why it’s a “wallet in the street!” And so in an unexpected turn, Walter’s day goes from down-and-out to one that’s filled with possibility.

And it’s also very likely that Billy Bloom – Ocean Beach resident, first-time children’s author, and elementary school teacher – has hit upon a book that will tickle the funny bones of young readers while helping them discover some important life lessons.

The bold square pages all but buzz as Walter, in hoodie and hair askew, considers his windfall in the “old brown wallet … stuffed with wads of cash.” There’s no end to his buying power. He can have that “ten-speed beauty” of a bike, and “the hottest hand-held game.” Bloom knows his students and what they wish for. “It felt like he had found a private ATM machine.”

All that changes when Walter sees an old man talking to a policeman. “It was old … and it was brown,” he tells him and it had his monthly wages.

With a light touch and lively rhyming stanzas, Bloom hits all the right notes in this morality tale that pits a young boy’s conscience against what he would like to have and what is right to have. Tension mounts as Walter ponders his options and forgoes the spoils to do the right thing. As an added bonus, he even gets the girl.

Loose and lanky drawings from Tanya Leonello give the characters a frazzled look, their skinny arms flung up and out at jutting angles. And she makes no bones about her palette, done in greyed-down watery tones to fit Walter, the “9-year-old from Collingsworth … feeling rather grey.” With their thatches of hair on end and their frazzled expressions, Walter and company take on a frantic yet endearing quality, grounding the text with the graphics. 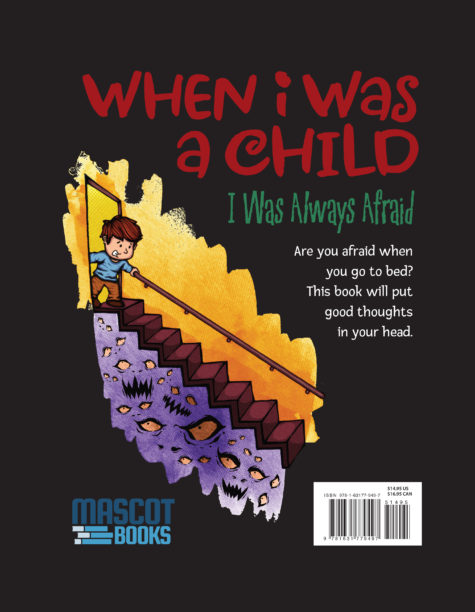 “When I Was a Child I Was Always Afraid”

Long Island Author Michael Cascio credits his Italian-American dad for teaching him that “nothing in life is to be feared; it is only to be understood,” and takes his father’s wisdom to shine a bright light on children’s bedtime terrors. Cascio finds his rhythm early on, kicking off the glossy pages with, “When I was a child, I was always afraid/Of attics and basements and noises they made.”

Revisiting his own childhood fears of police sirens outside his window and the bully down the block, the author conjures a slew of nighttime worries for his young hero, not least among them creepy come-alive toys, and a tree that sends its menacing finger-like branches through his window to grab him from his bed.

The boy’s world changes when his father shows up and takes him by the hand, “He said he’d explain, so I’d understand.” And in the light of day he does understand that the, “branches seemed kind, they were waving at me! And the basement?  “…also not scary, with monsters so hairy.”

Easy on the eyes as well as ears, preschool and beginning readers will find splashes of bright golds, pinks, purples and blues setting off the author’s two-line rhymes sets. Wong’s colorful illustrations align and partner with the text, dark and frightening when the boy is scared, lighter and buoyant after his imagined interlopers are shown the door. Visually stimulating without being hectic, the drawings show the little boy clearly terrified of his make-believe intruders, a ready smile on his chubby face when his tall, long-limbed dad — they share the same shock of dark brown hair — puts the youngster’s fears to rest.

“When I Was a Child” will not only help soothe some childhood fears but the simple rhymes could very well help youngsters take their first steps into the world of words, a subject with which Cascio is all too familiar. He’s indebted to his fourth-grade teacher who instilled in him a love of books and learning.

Both titles available at Amazon.