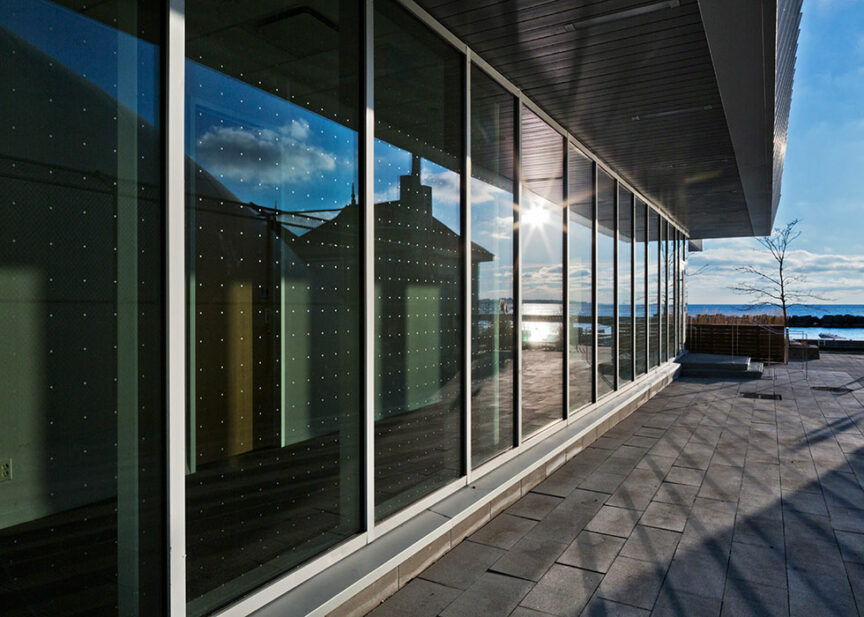 By Emma Boskovski ~ The Seatuck Environmental Association’s John Turner gave a lecture on Wednesday, March 20, at 7 p.m., titled “Reflections on a Transparent Issue: The Billion Dead Bird Problem.” The lecture was hosted at the Scully Estate at the Suffolk County Environmental Center in Islip. The purpose of the lecture was to focus on the causes of window-bird collisions that are of the top sources for bird mortality worldwide. Information regarding the advances in window products developed to suppress this issue also was discussed.

Turner, who focuses on policy and education in his work, began the lecture with the remark, “Birds are a barometer of human health.

“There are about 10,000 different bird species,” Turner said. “About 40 percent of them are in decline. About 10-12 percent of those have declined to points of extinction. This underscores humanities collective impact on birds and biodiversity in general.”

According to the American Bird Conservancy, it is estimated that between 365 and 988 million birds die each year from collision incidents involving windows.

“I titled this lecture, ‘reflections on a transparent issue’ because I wanted to illustrate the two important characteristics that windows have: reflectivity and transparency,” Turner said. “Because of this, birds cannot see the windows.”

The American Bird Conservancy refers to glass as the “invisible killer” and attributes collisions with buildings to be the number one anthropogenic threat to birds. During the day, reflective windows can mirror the landscape surrounding them and clear glass creates an illusion for birds. At night, migrating birds can be attracted to well-lit structures and become disoriented. Both of these circumstances can lead to collisions.

“Most people consider bird-glass collisions to be an urban phenomenon,” Turner said. “I must confess, when I began learning about this issue a few years ago, I felt similarly. I thought, ‘it must be the really tall skyscrapers in Manhattan,’ but it turns out that less than 1 percent of bird mortality is caused by high rise buildings.”

Rather, the largest share of collision deaths come from the nation’s smallest buildings. Buildings four to 11 stories tall make up about 56 percent of bird deaths and residences one to three stories tall account for 44 percent of deaths, according to a study published in the February 2014 edition of The Condor: Ornithological Applications.

Turner showed photos of buildings on Long Island that are among those four to 11 story buildings that are attributed to 56 percent of bird deaths, including Northwell Health North Shore University Hospital and buildings on the south campus at Stony Brook University.

“A lot of these buildings have reflective glass façade buildings where there are trees and blue sky,” Turner said. “Why wouldn’t a pine warbler who is traveling north feed off of the trees to the left of a highly reflective glass building, then fly into the building looking for more vegetation? However, not all bird species pose an equal threat to themselves by flying into windows.”

According to Turner, the most vulnerable species are those that migrate through New York, including the Canada Warbler, Wood Thrush, and American Woodcock. According to a 2009 report published in The Journal of Raptor Research, window strikes also are the leading cause of urban mortality for Sharp-shinned Hawks, Cooper’s Hawks, Merlins, and Peregrine Falcons.

Fire Island is an important part of the Atlantic Flyway, making this issue of increasing concern as beach houses continue to be built larger and higher, many with oversize windows to take in sweeping waterfront views.

“One twentieth of the national mortality of birds is in New York State,” Turner said. “With some quick math, between 35,000 and 50,000 birds are dying in NYS per day. We are talking about a catastrophic issue that is worldwide.”

Turner and the Seatuck Environmental Association have posted more than 2,000 stickers on windows at the south campus at Stony Brook University to prevent birds from flying into windows.

“Technology has been pioneered over the past five years to reduce these bird deaths,” Turner said. “Promoting visual interference to birds will prevent these collisions and ultimately reduce the scope of this issue.”

Some of the techniques that Tuner mentions are bird-safe building design, bird-safe glass, and the addition of exterior elements.

“Bird-safe glasses could be frosted or fritted glass,” Turner said. “There are also different brands of glass that have intricate designs or UV coating that we cannot see, but birds can. UV glass specifically has radio frequencies that birds are able to visualize.”

The American Bird Conservancy has rated brands of bird safe-glass on its website and mentions in its ratings where the product would be ideal and the lifespan of the product.

“The key is that you want to create aspects of the building that have external features such as different façade elements,” Turner said. “Or, windows that enable the birds to visualize them.”

Exterior elements that Turner mentions as effective are exterior window film, tape, decals, and string. Scientific research also has proven that methods such as applying hawk silhouettes and single decals are ineffective.

“There is a lot we can do,” Turner said. “From working on one building to trying to set state and federal legislation into motion; there is substance to this issue and the human impact that caused it.”

An act, A.4055 (Englebright)/S.25 (Hoylman) has been created to amend the environmental conservation law in relation to enacting the “bird-friendly building council act.” The proposed act would “review the impact of bird collisions and resulting mortalities, develop guidelines for identifying buildings that pose the greatest threat for collisions, identify products and technologies that can help reduce or eliminate bird collisions, identify funding for retrofitting problematic structures, and develop a set of standards governing bird-friendly building design.”

“I have been an environmental warrior for too long,” Karen Blumer, resident of Wading River and attendee of the lecture, said. “We are fighting for somebody to lay the groundwork for this issue. The Department of Environmental Conservation (DEC) is responsible for laying the groundwork for tackling issues such as this; they render useless.”

Incorporating bird-friendly designs can reduce collision deaths by up to 90 percent, according to Turner. The Javits Center in New York City used to cause the most bird related deaths per year in NYS because of its 760,000-square-foot exhibition hall covered with glass. Renovations to the hall incorporated bird-friendly design principals and reduced bird collisions by 95 percent.

“I am interested in seeing how [proposed act A.4055/S.25] would be plausible,” said Blumer. “Will this fly in the architectural world?”

The Seatuck Environmental Association urges New York State citizens to write to their local and state legislatures about proposed act A.4055/S.25, or the “bird-friendly building council act,” as a means to gain support for the incorporation of bird-friendly design criteria into building codes.