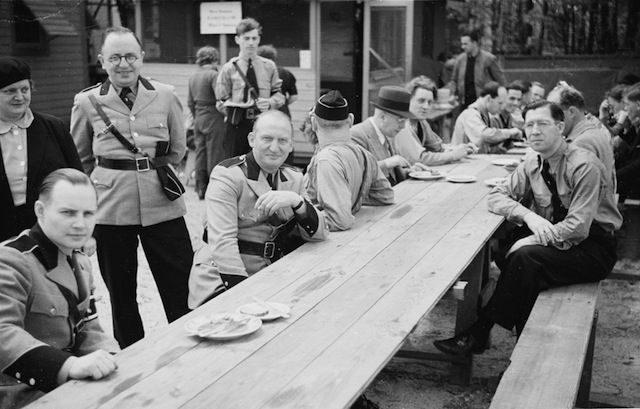 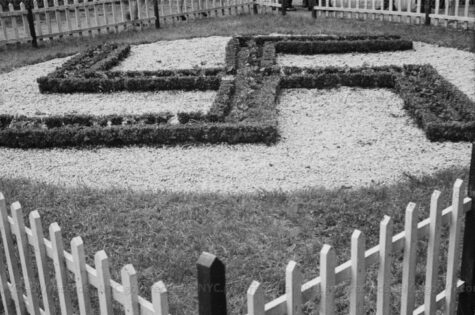 A flower bed with a swastika design was a centerpiece of Camp Siegfried’s social club’s garden.

The year 2020 marks the 75th commemoration of liberating prisoners from the Nazi concentration camps, and exposing just how inhumane humans can be. The National Socialists Party of Germany, aka the Nazi Party, never painted the words Only Aryan Lives Matter on the pavement in front of grandstands from which Hitler preached sermons of hate. They wrote those words, in blood, in our history books.

Though only in existence for 25 years, the Nazi Party was responsible for 17 million deaths, 6 million Jews and 11 million others [Roma (Gypsies), the handicapped, political prisoners, religious dissenters, homosexuals, as well as Prisoners of War].

As far removed as we may feel today from the horrors of those days not so long ago, we need only to look across the bay to see what was happening not so far away. Within sight of Fire Island is a town called Yaphank. In the late 1930s, this town was home to the infamous Camp Siegfried, a summer camp that was owned by the German American Bund and operated by the German American Settlement League (GASL), a camp that openly taught Nazi ideology to boys and girls.

This innocent hamlet was founded in 1739, by Captain Robert Robinson. In the mid 18th century John Homan built two mills inspiring the town’s name, Millville. It was later changed to Yaphank from the native Indian word Yamphanke, meaning “bank of a river.”

Yaphank has a rich history. During World War I, it was home to a boot camp called Camp Upton, used for training troops prior to their embarkation overseas. It was while stationed at Camp Upton that Irving Berlin composed the songs “God Bless America” and “Oh! How I Hate to Get Up in the Morning.”

Camp Upton also has ties to Fire Island. In the early 1920s, the Perkinson family, who owned much of what is now Cherry Grove, decided to subdivide their property. They sold more than 100 plots for about $250 each, some of whom also purchased government surplus homes from Camp Upton. They floated them across the bay to Fire Island, establishing the first large-scale settlement on the island (Point O’ Woods also makes this claim).

But this is now and that was a then. Camp Siegfried opened in 1935. At its entrance both Nazi and Hitler Youth Flags flew alongside the American flag. It featured a social hall, a lake for swimming, a 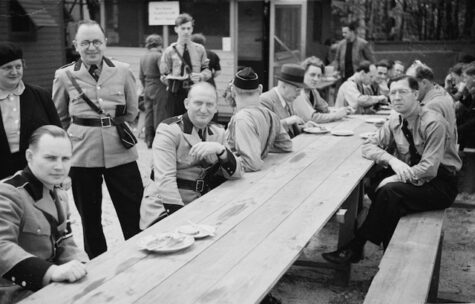 Such costumes look out of place on the sleppy Long Island of Yaphank.

ball field, and a large white stage. The camp was opened expressly for the purpose of indoctrinating 150 to 300 boys and girls aged 8 to 18 in Nazi ideology. The children wore military uniforms and carried the banners of the Hitler Youth movement.

The Town of Brookhaven had approved a planned community called German Gardens. Despite Nazi aversion to free market capitalism (it could not be trusted to put national interests first), the Bund ballyhooed their camp with fervor.

Their marketing was, in many ways, not unlike how some Fire Island development companies that founded communities like Ocean Beach or Saltaire produced pamphlets to entice families in New York City with the promise of fresh air and a wholesome summer paradise to raise their children – but the similarities end there.

German Gardens had streets named after Adolf Hitler, Joseph Goebbels, and Hermann Goring, a community of 40 acres of small, well-kept bungalows. One home had the swastika inlaid in its roof shingles. A flower bed with a swastika design stood at the foot of the social club’s flagpole.

German-Americans would catch the 8 a.m. LIRR “Camp Siegfried Special” to Yaphank and would march from the train station to the camp singing German songs. Some wore German folk costumes, some Nazi Brown Shirts, others the Black Shirts of Italian Fascists. 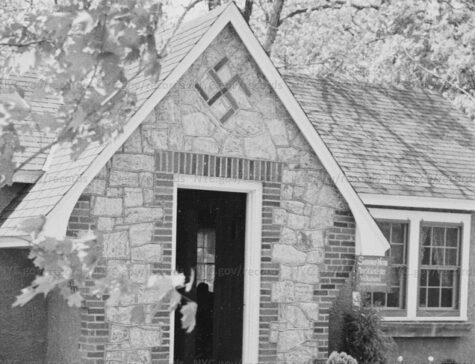 A quaint Camp Siegfried cottage with a swastika inlaid in the masonry.

It was a family affair with a German folk-festival-flair complete with oom-pah-pah bands. While some of the leaders and parents were zealous Nazis, most were loyal to both America and Germany. At one point, August 1938, more than 40,000 people attended the annual German Day festivities at the camp.

The children would compete in athletic competitions, swimming, hunting, and shooting. At night they would sit around bonfires singing the “Horst Wessel Song” and “Deutschland Uber Alles.” To establish discipline the staff would occasionally waken the campers and take them on midnight marches through the woods.

The Bund was led by German-born Fritz Kuhn, who moved to the U.S. and became a naturalized citizen in 1934. Kuhn told the House Un-American Activities Committee that to join the Bund one had to be “Aryan,” i.e. “a member of the white race.” He claimed Bund membership of 20,000 with four or five times that many sympathizers. In a court case in 1938, one witness saluted the American flag with the Nazi salute. When asked if that was the American salute he replied, “It will be.”

Kuhn was also the organizer of the infamous rally at Madison Square Garden where violence broke out between Bund storm troopers and thousands of mostly Jewish protesters in the street outside the Garden. One Jewish protester managed to reach the stage where Kuhn was mocking President Franklin D. “Rosenfeld.” The protester had to be rescued by the NYC police after being stripped and beaten.

Later, Kuhn was found guilty of embezzlement and tax evasion and sentenced to prison. While in Sing Sing he was stripped of his citizenship and, after the war, deported to Germany. In a comic Mel Brooks twist of fate, he was imprisoned for being a Nazi in the now Nazi-free Germany. He died in 1951 “a poor and obscure chemist, unheralded and unsung.”

In 1940, the GASL took control of the camp announcing it would be non-political, but when Germany declared war the U.S. government seized the camp and shut it down forever. The property under German Gardens still remained with GASL meaning that any sales had to be approved by the league. All owners had to be primarily of “German extraction.” In 2006, this covenant caused problems when a couple tried to sell their property but could not because of its restrictions. New Your State ruled that the clause violated the Fair Housing Act, and in 2017, the GASL was forced to change its by-laws and pay damages.

The names of the streets in German Gardens have all been changed. Adolf Hitler Street is now Park Street, Goering is now Oak, and Goebbels is Northside Avenue. Most remembrances of its Nazi past have been erased but the clubhouse still stands continuing to display both American and German flags.

Time marches on dragging some of the vestiges of yesterday’s hate along with it. Need we heed yesterday’s deeds? Stop for a moment. Dwell on those who died in death camps like Auschwitz, like Sobibor, like Treblinka. Millions of words have been written about the millions killed in those camps, but what has already been written is still millions of words short of what needs to be heard.

All photos from New York City Department of Records.