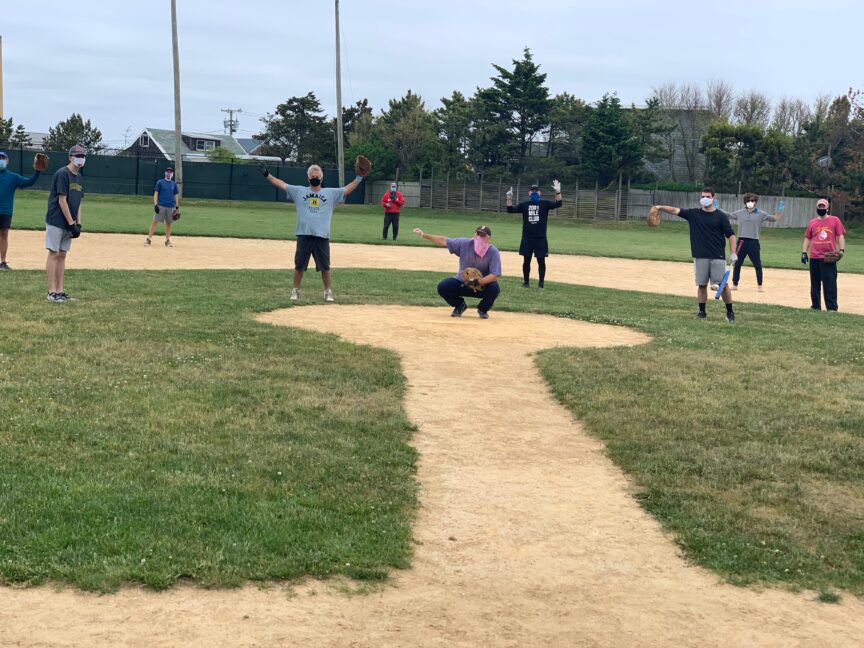 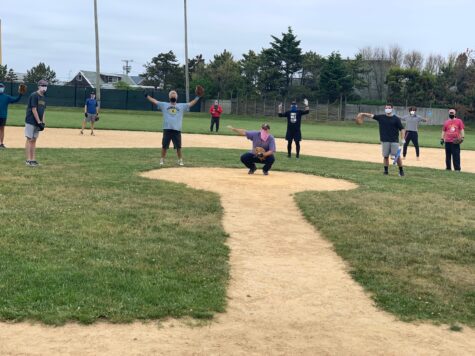 By Joey Macellaro ~ After some uncertainty, softball has returned to our community’s ball fields, albeit with new coronavirus-related safety precautions – and a few displaced players.

“It’s been nice to have an influx of new talent,” said Alex Friedman, commissioner of the Ocean Beach Softball Tournament. With this year’s basketball season canceled, a number of locals have joined the softball program for the first time, replacing some of the regulars who have decided to stay off the field. Saturday and Sunday games resumed on July 4, and five teams of nine will be competing in the annual tournament starting Aug. 8, instead of the usual six.

Until Ocean Beach got clearance to play, some members temporarily joined the Seaview men’s softball program, which opened Memorial Day weekend. Seaview Ballfield Committee Co-Chairs Warren Rosen and Peter Knobler have followed precedents set by national leagues in implementing a unique set of rules that allow players to distance themselves from others, including having separate bases for runners and basemen spaced 6 feet apart. Like Ocean Beach, the Seaview group is requiring protective gloves and face masks for all players.

“We’re very thankful to Seaview Association President Tom Ruskin for allowing us to play safely this year,” said Rosen. “For a while we weren’t sure this would even be possible.”

Celebrations were subdued this year for our local high school and college seniors, but the pandemic could not diminish their accomplishments. Ben Luckow of Ocean Beach graduated from Sachem High School East as student government president and received early acceptance into the Cornell University College of Engineering. Sophia Calabria of Ocean Beach graduated with honors from Eastport-South Manor High School and will be attending the Smeal School of Business at Pennsylvania State University in the fall. Katie Flynn, a resident of Ocean Bay Park who spends time here in Ocean Beach, completed high school studies at the Loyola School in New York City and is enrolled in the University of Miami’s honors nursing program with a fall start date.

Now that school is out for the summer, bicyclists will be out en force in our community, and as of July 17, we can ride anytime we choose in Ocean Beach. The village passed a resolution allowing summertime bike riding on the weekends for the first time in recent memory, with riding prohibited on Bay Walk as usual.

Diane Monte organized a new Little Free Library this summer at the Palms Hotel, which is fully stocked. A little beach time with a good book and a good newspaper sounds outstanding. Happy reading!