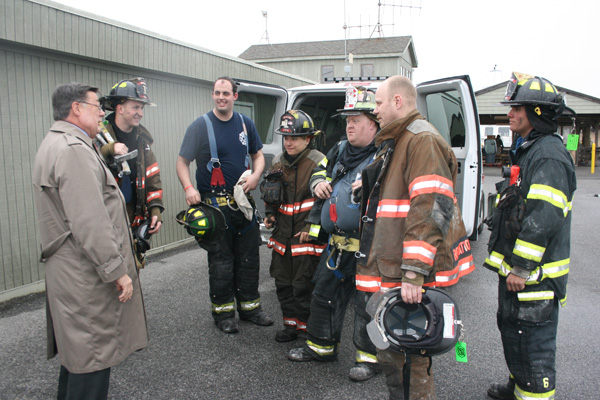 Internet service came back online in Cherry Grove on the first day of April. As original predictions stated service would be down for at least a week, surely the early spring residency was delighted it came back ahead of schedule.

“Hate to say by now I could write a book on how to do it,” said Kenneth Stein, owner of Sayville Ferries, when discussing his company’s emergency transportation of firefighters from greater Long Island across the Great South Bay to lend mutual aid support in the early hours of Friday morning, March 27. “The Grove has suffered many fires over the years. But we are part of the fabric of those communities, and take great pride in that.”

Some of the firefighters at the scene remarked that if the fire happened two weeks earlier the bay would have still been frozen. Had that been the case, consequences could have been far more serious. However fate is strange. Neighbors are still gossiping about the two cleaners planning to stay at Holly House the night before, but missed the last ferry on Thursday afternoon.

Once the frenzy of media coverage calmed down, a third injured firefighter surfaced in the count. Why he or she was left out of initial reports is uncertain as release of names of these firefighters who suffered minor injuries are still pending. Nevertheless, one of them was exposed anyway, as he rode the ferry back from the hospital later that day, and attracted the notice of a swarm of television crews when they sighted the bandage on his hand.

“The telephone was ringing off the hook,” said Robert Conlon, who was among the first at the scene. “I finally turned it off so I could get some sleep.”

Conlon injured his hand when briefly taking off one of his asbestos gloves to adjust a fire hose connection. As the owner of Avalon Landscaping, it remains uncertain how this injury will impact Conlon’s working season.

“I was at least 35 feet away from the blaze, but my hand got second degree burns from radiant heat. It’s scary to see something that big. The sky was orange. There was no stopping it until more help arrived.”

“I’m not sure when I’ll be digging holes in the ground again, but I’m not in any pain and was treated like a king at Stony Brook Hospital’s burn unit. I’m just so grateful the mutual aid system is in place because we knew that help was on the way. This is a community that pulls together and we will come back bigger and better.”

Meanwhile on the mainland, Walter Dunn, Town of Brookhaven’s Fire Commissioner, is still investigating the possible cause of the immense fire.

“We are still conducting interviews,” said Dunn. “Unfortunately after a fire in which the damage is so complete there is very little left to piece together to form a timeline. Three structures were completely consumed and there is not much left to look at.”

While arson still has not been ruled out as a cause, the Fire Marshall’s office is presently gathering information about electrical service in Cherry Grove the week prior to the fire.

“If anyone has information that they think may be helpful they are asked to call our office,” Dunn added. “This could be a power surge or circuit breakers tripping. Any irregularities noticed might prove useful.” 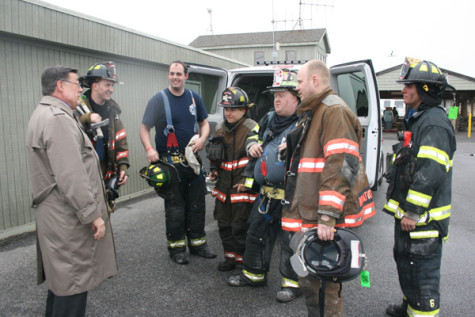 Brookhaven Town Supervisor Ed Romaine with some of the firefighters at the scene that day. Romaine pledged a streamlined planning and permit process so rebuilding may commence in Cherry Grove as soon as possible. (Photo courtesy Town of Brookhaven.)

Parties with possible information to report can reach the Fire Marshall by calling Town of Brookhaven’s Department of Fire Prevention at 631-451-6262.