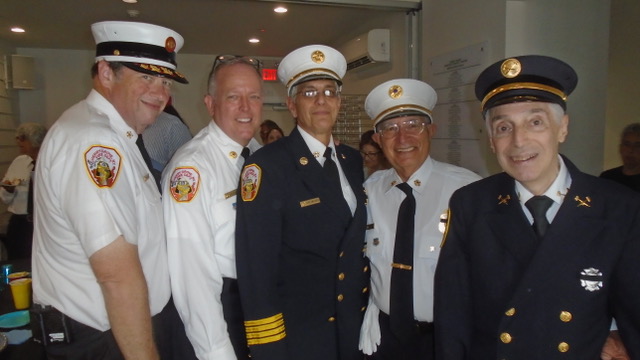 Rose Levine the 43rd Homecoming Queen of Cherry Grove is excited about invading the Pines with her bevy of 300 beauties. Many residents and visitors rent tables with several Grove establishments that afford a great view of the festivities. This gives them the opportunity to watch the parade go by in leisure and comfort. Gay Nathan and Julie Paradise have organized a group of friends including Frank and Gary, their guests from Santa Fe; Mel and Don (returning to the Grove); Al Wofle; and Ken Lewis to join them at a ringside table. Additional coverage of this event will be featured in the next issue of Fire Island News. 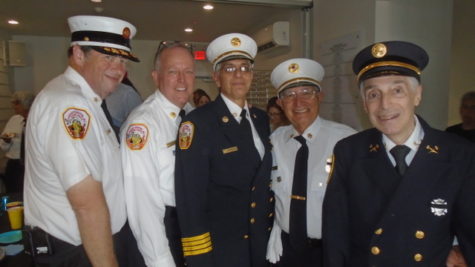 The Cherry Grove Fire Department had a major fundraiser at Cherry’s. Donna Piranha hosted the evening by introducing everyone, doing a few songs and bringing guests up for games. The Ex-Chief Steven Williams and First Assistant Chief Laura Ann Giusto were present. We were all glad to see CGFD President Arthur Cohen back in the Grove looking fit and ready to get back to his position. Wanda Sykes, who is spending some free time in the Grove, also attended the fundraiser along with just about everyone in town having a great time.

The Cherry Grove Fire Department also gave a touching memorial service for two longtime members who passed away this year. William ‘Bill’ Strumlauf served since 1977, and Robert ‘Bob’ Younger served since 1996. Family and friends were there to honor them. Bruce Michael Gelbert sang the Mourner’s Kaddish.

Johnny Pool hosted his 38th year of the “Drag Attack” at Cherry’s. Donna Piranha MC’d the show and Johnny and Donna performed. Contestants were Ramona, Anna Nomaly, Jackie Pizza, Condim Miranda, Briana Wintour, Frances McDoormat, and Idano Whomi. It was a funny and silly afternoon. The winners were Jackie Pizza and Frances McDoormat. Richard Bell, assistant to the producer, has been doing this job for 15 years. Surprise guests were China and Robin Murray.

Gerri and Morgan MacWhinnie are looking forward to the arrival of their daughter, Inez, and granddaughter, Claire, who now live in New Zealand. They will be spending a few weeks in the Grove.

Tim Tareco turned 40 +10 this year. He hosted a fabulous party at his new beautifully designed home in the Grove. His parents, Gina and Pat, and his sister, Julie, and her wife, Lauren, arrived from Hull, Massachusetts, and were introduced to all the many Cherry Grove friends in attendance. The food was catered by Stephen Daniello. Presented elegantly on the patio around the pool, it was delicious and served by four young men dressed in white.

The Cherry Grove Garden Club had a very successful day presenting their annual Garden Tour, topped off by a beautiful cocktail party at the new home of Bill Beauchamp and Michael Lonergan. It was hot but pleasant around their poolside bayfront home.

The Concerned Women of the Grove, an organization that raises money for breast cancer, kicked-off a new event on Saturday, June 30. Angela Rugerio, Sue Panzer, and Angela Smith spearheaded this group of 28 people who arrived in the Pines and walked back to the Grove along the beach. Donna Piranha led them, wearing a hot pink dress with a 20-foot train! This sounds like the beginning of another big event.

The Arts Project is celebrating its 70th year. To open the theatrical season at the Community House, Thom Hansen directed “70 Girls, 70 Years.” This revue featured old and new moments of our great history of Cherry Grove shows through years. Twenty performers appeared. Some performed original material, and a few old timers like myself performed our “original” numbers. I recreated “Good Times Are Here to Stay” from the 1972 “Dames at Sea.” The house was sold out and the audience loved it. Eric Martin was the musical director. The community wants to thank everyone who worked on this show.

Michael Moran and Mathew George graciously hosted a birthday party for Michael Fitzgerald on June 22. At least 15 guests from Cherry Grove were there to enjoy a wonderful buffet dinner with a full bar and a great selection of desserts.

Jack Roullo spent a week in Southern Italy, where he attended a family party. He rushed back to the Grove so he wouldn’t miss too much here. Other Grove travelers were Dan Evans and Jim Kelly-Evans who visited Munich, Dresden, Berlin, and London. Frank Borsis is on a Greek visit spending time with his family at the Island of Lefkada. Peggy Samson is back in the Grove from London, entertaining guests and enjoying the good life. Richie Mastascusa traveled to Massachusetts for one week to visit his family. Richie is the Pilates guru of the theatre industry. His clients are many Broadway celebrities.

The 49th annual New York City Pride March in Manhattan was the biggest to date. One of the sponsors of the March was TD Bank. Former Cherry Grove resident Jason Dull spoke on behalf of TD Bank in their commercial. Our very own China was waving from the TD float! We also saw Tree, a frequent visitor to the Grove, riding on the Stonewall float. Another Grove resident, Franco, was proudly marching.

July 14: “La Vie en Rose” starring Rose Levine will be held at the Community House on Bastille Day, at 8:30 p.m. Brian Taylor will accompany. Stop by the Community House box office either Saturday or Sunday, from 10 a.m.-1 p.m., or visit online at www.artsprojectcg.org.

July 18: The sixth annual Opera Discussion Group, hosted by Jim Crapotta, will be held from 11 a.m. to noon, beginning today and every Wednesday, at The Community House. All are welcome.