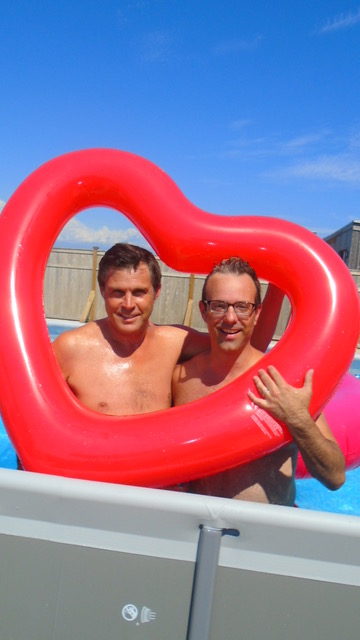 Congratulations to Fire Island News (FIN): Celebrating 60 years and still going strong! Bea and Gary Garfield were the founders of FIN. In the early days of the News, Rhoda Gould was the Grove columnist. In 1973, she, her husband, and their son, Mark, who lived in the Grove, moved to Oaxaca, Mexico. Rhoda requested that I write the column to replace her. Since then, I have been writing for 43 years. Fourteen of those years I was with another local newspaper, writing for the Grove, and then the Pines as well.  When I returned to Fire Island News in 2015, I was asked to continue my two columns.

In the early days of my service to FIN we did not have fax machines or email. I would type my column on my Royal typewriter, and meet the Ocean Beach jitney service on Second Avenue and 54th Street in Manhattan. They would deliver the envelope to the ferry, then someone from the office would pick it up in Ocean Beach. This went on for years. I only got a computer about 10 years ago, when my typewriter ribbon would not work. I called Sears thinking I could buy a ribbon. The salesperson did not know what I was talking about.  So I went modern.  I still need help, but I get the job done.

After the Garfield’s retired, Ildiko and Jay Trien owned the paper. In the 1970s and 1980s all the columnists would travel to Ocean Beach on Labor Day after the newspaper was completed for the season. We would attend a luncheon staff party at Matthew’s. John Whyte and Dorothy Levy would take the water taxi from the Pines, pick me up in the Grove and we’ d join the party in Ocean Beach. In those days John and Dorothy would alternate their columns for the Pines writing four issues each season. This went on for many years. I am thrilled to be part of this new regime. 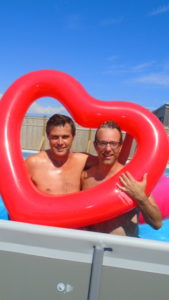 Michael Fitzgerald and I attended a birthday bash on a hot Saturday afternoon, hosted by Michael Moran and Matthew George (M & M) to celebrate their birthdays. A barbecue luncheon was served for at least 75 guests.

Michael and I had a small dinner party at “Roseland” to welcome Gay Nathan and Julie Paradise back to the Grove after a few week hiatus in Santa Fe. Tim Tareco and his guest Ian  Sklarsky joined us.  Julie and Gay’s Labor Day house guests are Tom and Alan from Santa Fe, who are very familiar to Cherry Grove.  We also attended an intimate cocktail party at Gay and Julie’s.

Michael Goddard and Sean Hoffman entertained Michael’s three sisters: Tammy, from South Carolina, Kelly from Tucson, and Julie from Detroit. It was their first time to the Island and they loved it.

The future Dr. Jason Mann Versace De Girolamo Sinelli returned to the Grove for a short visit, taking time from his internship at Argosy University at Tampa, Florida.  Michael, Jason and I attended a cocktail and barbecue dinner with Bill Loschert and George Maher who rented a house in the Grove for three weeks. They live in London, Manhattan and Tipperary, Ireland, when not in the Grove.

“The Sues” (Susan Krivits and Susan Rubenstein) had a beautiful cocktail party to celebrate their 44th anniversary. Alexander Gertzman had an elegant dinner party at his Bayfront home. His guests were Mary and Gary Solomon from Sailors Haven; Annette Mallard; Broadway Musical Director/ Composer/Director Fred Barton, who was staying at Belvedere; Michael and myself.

Our new Cherry Grove homeowner from London, Peggy Samson, celebrated her birthday with her husband Martin Byman and good friends David and Amy Davidson Sorkin. Amy is a political writer with The New Yorker.

Mike Merino and Glen Dooley spent three weeks off the island. They returned to the Grove and had a dinner party entertaining their Cherry Grove friends.

Mike Fisher and Gary Sachs had David Brian Brown as their house guest. David will be designing the wigs for the new Broadway production of  “Frozen” opening next season.

The Arts Project had a banner year with all their shows and events. They also raised a good portion of the money needed for the new sound system.

Sept. 2 at 7 and 10 p.m. The Arts Project presents “Legends VII Jingle Belles” with an all-star cast directed by Matt Baney. Visit artsprojectcherrygrove.org for ticket sales or at the box office.

Sept. 3 at 11 a.m. The Garden Club will have their annual cake sale at the Community House. It is always a big success financially and tastefully.

Sept. 3 from 4-7 p.m. Toga Party at “High Fidelity.” Hosted by Roland Michely and Joe Anania, it is a benefit for the Cherry Grove Arts Project.

Sept. 9,  at 1 p.m. The 52nd Miss Fire Island Pageant will be held at the Ice Palace, hosted by Ariel Sinclair, Porsche and Logan Hardcore. Tickets are available at missfireisland.com.

Sept. 23. The Annual Cherry Grove Ball will be held at Island Breeze. This year’s theme is “Mad Hatters.” See posters in town.

See the Jewish High Holiday Schedule in the Pines column.

Have a wonderful fall, winter and spring. Until next season…

While my grandmother, Bee did indeed run the paper for many years until my mother did, it was founded by my father when he was 17.

Congratulations indeed to the Fire Island News! However Bee and Gary were not the founders. My father, Jay Trien is.