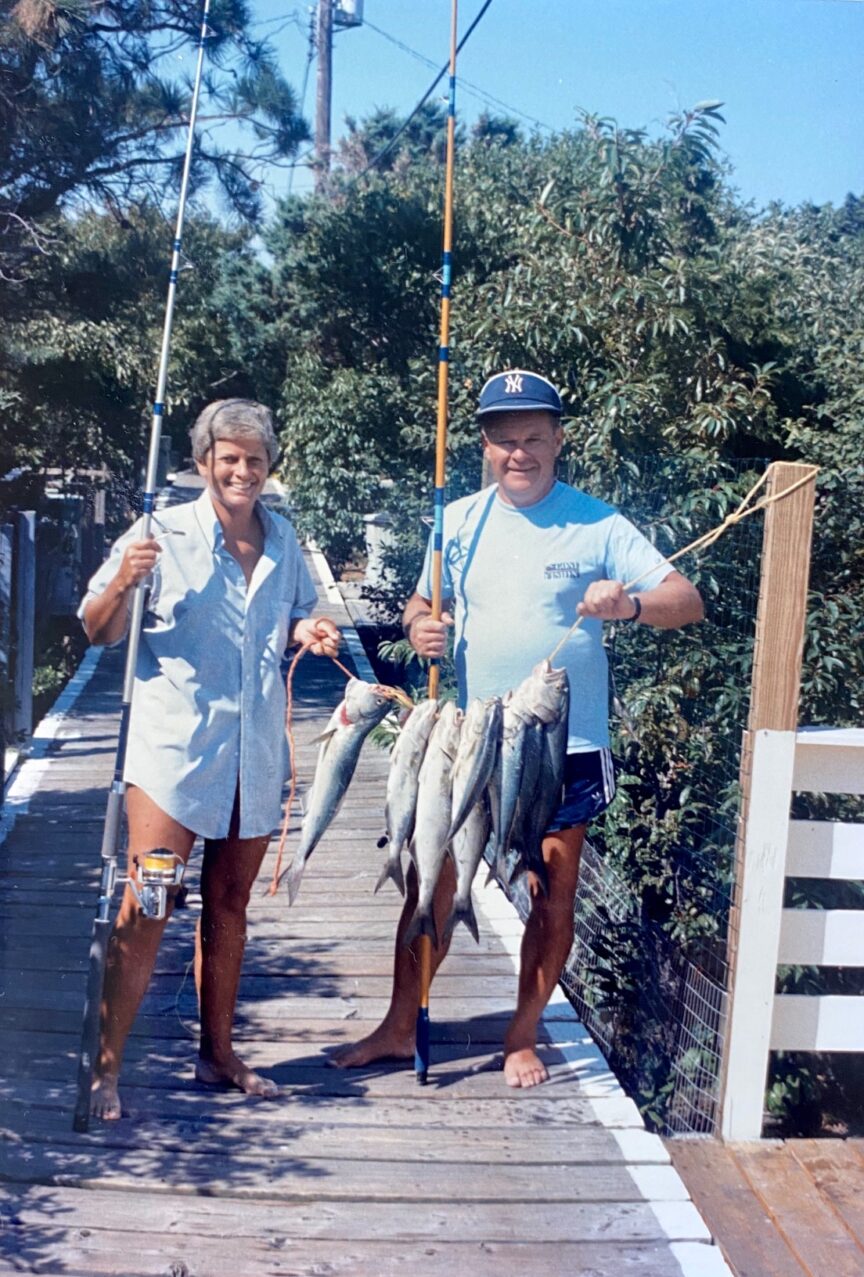 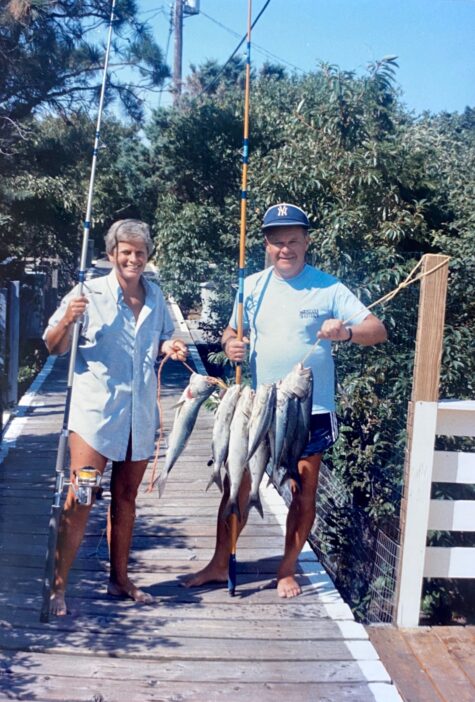 Joan Van Ness and Frank McCarthy returning with their catch of the day. Photo courtesy of Joan Van Ness.

By Robert Levine ~ It’s August. We are having a strange, slow moving, and unusual summer. Fewer and smaller dinner parties; no fundraisers or cocktail parties; less gatherings at the bars, restaurants or at home; and no shows at the Community House. We are getting used to a simpler lifestyle in Cherry Grove and The Pines. It is fine for those who like a quiet lifestyle, but I prefer action.

When Cherry Grove was a fledgling new community in the 1920s, there was no electricity or running water. People arrived from Sayville and other local parts. It was a little village where people relaxed and did practically nothing all weekend. Eventually the bungalows were sold. People who had an old porch, a house, a barn, a store or other existing structure would float them over to the island on a barge. My house was originally a gas station office. The Grove began to develop.

A popular pastime back then was fishing in the bay or ocean for pleasure as well as dinner.     Years ago I recall sitting on my bayfront deck to see people in the bay clamming. We had devoted “fisherwomen” like the late Marge Cozzalino, Annie and Rosie who fished in the bay.

Others went surf casting by the ocean quite often. Among them were Bob Younger, George Oakley, Frank McCarthy, Martha Morgan and Nick Marzi – all now passed. Nick taught Joan Van Ness how to fish. Mark Atten and Clyde Oakley are still fishing. Many times we were invited to Marge and Sasha’s for a fresh fish dinner.

In the 1960s, my bayside neighbor Sonny Harmsworth lived in London, and worked for Harmsworth Press. He spent every day in September fishing. We have a new group: Carpenter   Summers, Lee Sharmat, and Sharon and Michele Schneider. They are not only catching fish, but ridding the bay of harmful debris, like old traps and fishing poles. A pod of dolphins was seen off the beach at the end of July. Maybe it is a sign of hopeful things.

Fire Island News Editor Shoshanna McCollum joined Jay Robinson, Michael Fitzgerald, and me for a wonderful dinner at Cherry Grove Pizza. Ariel Sinclair hosted bingo at The Island Mermaid in Ocean Beach on the same night. Victoria Falls, Davita Jones, Androgyny, Brenda Dharlng, Frieda Lay and others joined Ariel – all wearing caftans – including Shoshanna. She sailed home with them on Fire Island Water Taxi. I heard it was a spirited ride, and Scott Hirsch met them all at The Island Mermaid most cordially.

A new fire truck joined the Cherry Grove Fire Department fleet on Saturday, Aug.1, named in honor of our first female fire chief, Lyn Hutton, who served as CGFD Chief from 1980-1994.   Attendance was respectable, including Brookhaven Councilman Neil Foley. The group was at the dock to greet the truck, barged on a ferry, with whistles, horns, sirens, and cheering. A small reception was held at the firehouse where they served Prosecco and cold drinks. Lyn, who lives in North Carolina these days, was not able to attend the ceremony due to the COVID-19 pandemic.