The plaintiffs’ alleged that the U.S. Army Corps of Engineers and Suffolk County, the two entities behind the Fire Island Inlet to Moriches Inlet (FIMI) beach renourishment project, violated the homeowners’ Fifth Amendment right to due process by seeking easements – a legal right for the government to take part of their property – for beach work that’s not being done in Cherry Grove. They also accused the government of violating the plaintiffs’ Fourteenth Amendment right to equal protection, since the other 16 communities on FI are getting more sand pumped on their beaches and a new dune, but Cherry Grove is not.

“Either give us a dune or leave us alone,” said Jonathan Sinnreich of Central Islip-based Sinnreich Kosakoff & Messina LLP, who represents the growing number of plaintiffs in the federal lawsuit. Parts of the $207 million FIMI project, which was launched after Superstorm Sandy flattened much of Fire Island’s dunes nearly four years ago, has been completed. Dunes were recently rebuilt at Smith Point County Park on the east end, as well as from Robert Moses State Park to the Village of Saltaire on the west end. Work is slated to resume this fall from Fair Harbor to Seaview. The Ocean Bay Park to Davis Park leg of the work – two of the most Sandy-ravaged communities – is expected after that.

Cherry Grove falls within that last section, in the Town of Brookhaven half of FI.

“Notwithstanding the fact that Cherry Grove is clearly within the ‘project area’…Cherry Grove – alone out of the 17 communities identified in the project description as included in the project boundaries – is not receiving the benefit of any restoration or reconstruction of its primary dune,” the lawsuit states. “There is no rational technical basis for the omission of Cherry Grove from… the FIMI project. The primary dune along the shorefront of Cherry Grove, including plaintiffs’ property, suffered severe erosion and damage as a result of Hurricane Sandy, and in subsequent years, and is equally in need of repair as the other 16 communities receiving the benefit of the FIMI project.” Besides the two agencies, the suit also names the United States of America;

Colonel David Caldwell, commander of the New York District of the Army Corps of Engineers; and Gilbert Anderson, the commissioner of Suffolk’s Department of Public Works.

John Casolaro, the Manhattan-based attorney representing the county, referred questions to Suffolk, but county officials did not respond to a request for comment. James D’Ambrosio, a spokesman for the Army Corps, said he “cannot respond to pending litigation.”

Judge Sandra Feuerstein, who is presiding over the case in U.S. District Court for the Eastern District of New York, is expected to rule in October on the plaintiffs’ pre-trial motion seek- ing a preliminary injunction barring the government from obtaining easements in Cherry Grove until the case is resolved. The suit is not expected to halt construction. 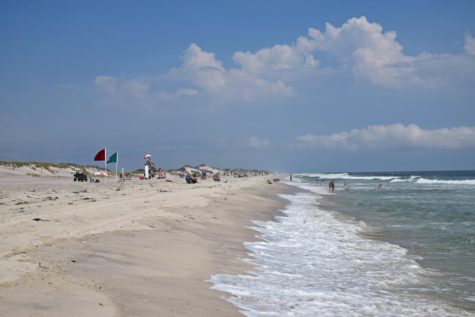