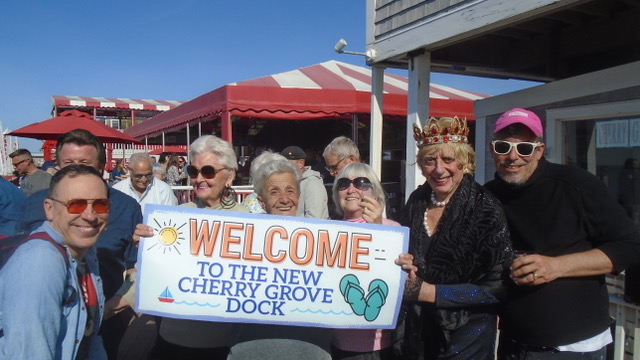 As Cole Porter wrote, “Birds do it, bees do it, even educated fleas do it.” So let’s do it and have a great summer! After all, aren’t we lucky to be here and to enjoy all the excitement?

On Saturday, May 18, Diane Romano, president of the Cherry Grove Community Association Inc. (CGCAI), along with the townspeople, christened our new dock. Work began in October and now we have a wider pier, all made with Brazilian hardwood Ipe, ready to serve for years to come. Project manager Rob Maag, along with our own Gerri Loquesto, worked diligently all winter and completed the project in time for the 2019 season. Thank you to all who attended including Brookhaven Town Councilman Neal Foley, Town Supervisor Ed Romaine, Park Commissioner Ed Morris, and State Senator Monica Martinez. Cherry Grove royalty was also on hand to witness this historical event, which doesn’t happen too often. Champagne was served to all. Thanks to Judy and Ken Stein, Jacquie Piazza, and Justin Dobay for their help. After the dock event, the CGCAI hosted a membership party at the Community House.

The community had a Beach Clean Up Day on May 11, organized by Todd Erickson, Tim Arnold, Steve Williams, and the board of CGCAI. At least 40 people attended. This was the first part of a major project. The second clean up day will soon be announced. A total of $8,600 of the $20,000 needed to finance this ongoing undertaking has already been raised. The Dune Fund has pledged to match the final total.

My winter schedule was very busy. I spent three days in Paris and then eight days in London, where I went to many West End shows, had wonderful dinners, and enjoyed spending time with my friends and Cherry Grove residents Peggy Samson and her husband Marty. On the plane I met Dan Nafzger from Cherry Grove, who we also met in Hudson, New York, where he has a home. In Hudson, I was one of the entertainers in a show at The Red Dot. We also had dinner with our other Cherry Grove friends Mike Merino and Glen Dooley.

Back in New York City, we attended a Doris Dear Christmas show. I performed my cabaret act at the Pangea in January and February. I attended a special screening of Mike Fisher’s “Cherry Grove Stories” at the Gay and Lesbian Center in Manhattan, and then again at the Cinema Arts Centre in Huntington. We attended the 71st Annual Cherry Grove In Town Party in Manhattan. We also attended the performance of our Cherry Grove neighbor Wanda Sykes at Town Hall on Feb. 28 in Manhattan.

Philipp Stoehr, aka Philomena, a past Homecoming Queen, was once again featured in the annual Broadway Cares Easter Bonnet production this past April. Mike Merino and Glen Dooley had Glen’s sister Gina and her partner Paul as their guests from Nottingham, England. Nine-time Tony Award Winner Tommy Tune and his longtime friend Peter Gelibo spent a few days in Cherry Grove. They visited me at “Roseland.” Michael entertained them while I was in New York. I’m sure we will see them more often again this summer.

Joanne Tavis and Diane Romano hosted a seminar in New York City at Northwell Health’s new Lenox Health Greenwich Village facility. Besides the interesting talks by many executives, including Executive Director
Alex Hellinger, we were escorted on a tour of the building. They have cutting-edge equipment and technology, which is fantastic. At least 30 people from our community attended, including Linda Gottlieb from the Pines. Northwell Health is the provider giving us excellent medical services on Fire Island, including Ocean Beach and Cherry Grove.

Obituaries:
• Joe Anania lost his mother Melinda, who was a guest every year. She loved coming to the Grove especially when she saw a show or was here for a costume party.
• Diane Romano lost her mother Kathryn Barone, who enjoyed celebrating her birthday in the Grove for the past 15 years.
• Frankie “Cocktail” Fioravonti lived in the Grove for more than 25 years. He became famous as a bartender in his high wig and outlandish outfits.
• Ray Mann lived in the Grove with his late partner Alan Prescott since the mid ‘50s. He enjoyed the elegant gay lifestyle.
• Sheila Styles lived at “MGM” for many years.
• Richard Wallgren bought the famous Pride House in the early 70s. He left the Grove at least 20 years ago.
• Phyllis Raskin and Jon Anderson lived in the Grove for many years. They were both in show business in New York and performed in our Grove
shows. They sold their house six years ago and moved to Connecticut.
• Cecilia Mary Rogers, who many of us knew as “Ceil,” lived in the Grove since the early ‘50s. She loved going to parties as much as her gin. We loved having her at “Roseland” for dinner.
• Tereze Gluck, a longtime resident of the Grove, recently built a beautiful house on the ocean. Her daughter is Abigail Savage, one of the stars of “Orange is the New Black.”
• Billy Ness, a new homeowner, died suddenly, leaving his partner Eddie to survive him.
• Michael Fesco worked at the Grove Hotel in the 1970s. He eventually became an owner and named the bar and disco The Ice Palace. He retired to Palm Springs, where he recently died.
• Carol Channing made Fire Island stage appearances as recently as a few years ago. She passed away in January. She was a frequent visitor, often staying with Jerry Herman in the Pines.
• Actress Kaye Ballard made appearances at the Atlantique nightclub in the 1970s. She died in January.
We also say a sad farewell to Boots, the beloved cat of Evelyn Danko and Valerie Perez; Dottie, the cat of Tommy Tusch; and Sybil, the dog of Joyce Rodgers. Remember all our departed loved ones at the Annual Memorial Service, held at the Community House on Monday, May 27, at noon.

Upcoming Events:
• An open meeting for the Garden Club will be held at 202 Surf Walk, on Saturday, May 25, at 11 a.m.
• Wanted: Flying Nun’s, Church Ladies and Reformed Sinners… The Annual House Blessing will take place on Sunday, May 26, from 11 a.m. to 1 p.m.
• Arts Project of Cherry Grove presents the APCG Homecoming Contest & Membership Party. Sunday, May 26, at 8 p.m.
• The Annual PAWS benefit will be held at the Cherry Grove Community House, on June 1, with an all-star Cherry Grove cast. Doors open at 8 p.m. Showtime 9 p.m. Enjoy the famous desserts after the show.