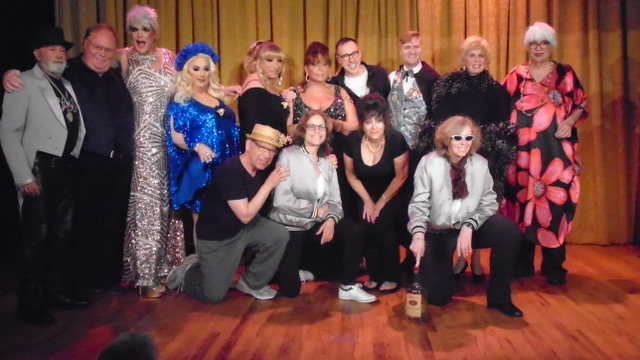 Victoria Falls was crowned as the new Homecoming Queen, elected by Cherry Grove residents and crowned by Rose as she puts her scepter aside. It was a sweet evening of fun and humor. Other contestants who entered were runner-up Davida, and Hope Spring. Rose Levine sang her final song of her reign “Rose of Cherry Grove Fame.” Panzi and Bella were the MCs, as they have been for the past 25 years, bantering back and forth. An auction of artwork donated by Cherry Grove artists was held in addition to the fabulous raffles donated by local businesses. Rose now joins the prestigious ranks of “old queens.” And yes, a few were present in the audience including: Scarlet Oh, Urban Sprawl, Beach Debree, Whore D’oeuvres, Uneeda Dunes, Donna Piranha, Ivanna Cocktail and of course Panzi.

Chris and Eileen Alley, who were our bingo hosts for many years, retired from this gig and will finally come to the Grove “as guests,” and they did Memorial Day Weekend. Happy 80th birthday Judy Hester; she and her husband, Don, celebrated with their family in Sayville.

Oofa made a return to the Grove for a few days, and was seen around town having a wonderful time. Peggy Samson arrived from London and will spend the next few months here with her pet doggy Fudgey, who is here for the first time. Her husband, Marty Byman, will be spending weekends throughout the season. Her mother, Lucille, is another frequent guest.

Richie Mastascasa had day guests who appeared at The Gateway Theatre in Bellport, in “On Your Feet,” which closed last week. The show starred Eddie Noel as Emilio Estefan, and Vince Ortega, the Dance Captain. It was their first time in the Grove. PAWS had two major fundraisers: The House Blessing on Sunday, May 26, was financially very successful. The PAWS benefit at the Community House was a major show on Saturday, June 1, directed by and starring Sal Piro; Mark York was the musical director. Sal brought back his famous Ceil routine, which is timeless. Valerie Perez once again had a dessert table overflowing with many sweets. Everyone had a wonderful time.

The new dock is beautiful and work is still being done. New flag poles and benches will be reinstalled very soon.

We must buy our stamps and send our mail from the Cherry Grove Post Office if we want the post office to stay open. The main office in Colorado looks at the bottom line. Let’s help, and keep Betty Faraci in our community.

Susan Ann Thornton once again organizes the Artist Tour of Cherry Grove the weekend of June 8 and 9. This is the second year they are partnering with the Dune Fund with a silent auction to kickoff the festivities on Friday, June 7. See flyers in town, as well as the community events calendar in this paper and on their website.

On the first day of June, 33 CGFD firefighters had their annual mask testing, using the self-control breathing apparatus. Suzanne Squillante and Barbara Goemans from the Safety Environmental Solution Company were on hand to supervise, along with Donna Wemple from Ocean Beach.