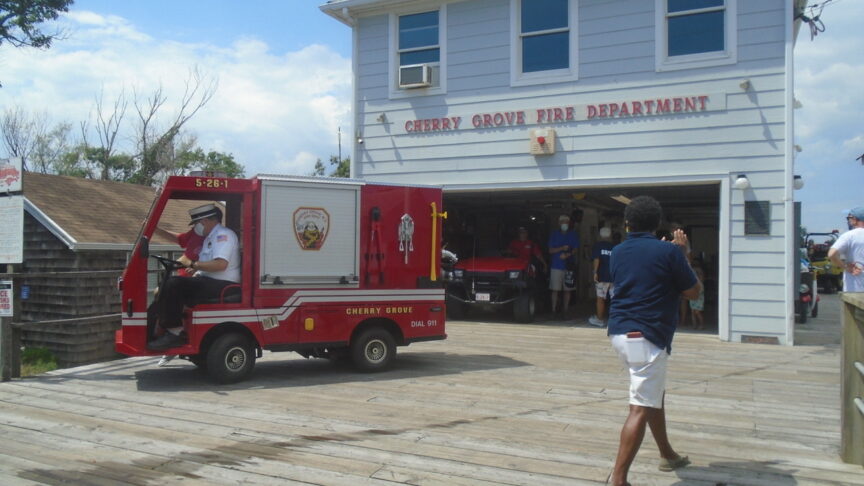 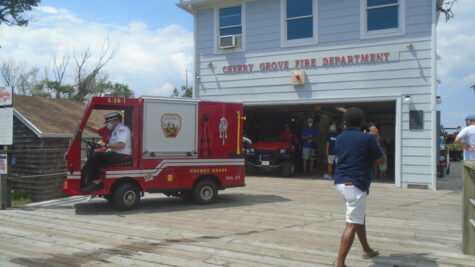 The “Lyn Hutton” will join the fleet of diminutive firefighting apparatus CGFD maintains to answer called in Cherry Grove’s unique setting that includes arrow beach boardwalks, to combat the blaze wherever it may be. Photo by Robert Levine.

In 2015, to navigate Cherry Grove’s narrow, unpaved boardwalks, CGFD partnered with Neville Apparatus of New Hyde Park to design a custom compact engine capable of safely maneuvering the town. That engine was dedicated in memory of Chief George Oakley. Last year, the Board of Fire Commissioners agreed to retire a 40 plus-year-old engine to purchase another and name it “Lyn.”

Lyn Hutton, a New York native, now-retired teacher and coach, started frequenting Cherry Grove with friends in the 1970s, and joined the all-volunteer Fire Department in 1976, becoming one of the few women in the fire service at the time. Coincidentally, that same year Hutton participated in the maiden voyage of what would become the Invasion of the Pines, to stand in solidarity with two drag queens who were refused service at a restaurant in the Pines.

After three years of volunteering and proving her abilities, Hutton became assistant fire chief, and then the department’s first female fire chief from 1980 to 1994. She attributed her success at CGFD to many years as a physical education teacher and coach of field hockey, softball and synchronized swimming as well as constantly attending seminars, classes and lectures about fire service to broaden her knowledge.

“I took every opportunity to learn everything I could and it did pay off,” Hutton said. “[As a coach,] I was the leader, the trainer, the administrator for the team and I just transferred all 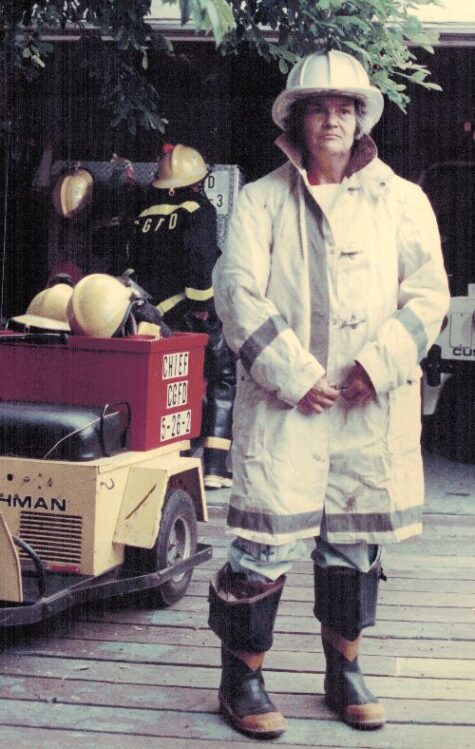 that to my position in the fire department … and it worked very well for many, many, many years.”

CGFD prides itself in being one of the only fire departments in New York State with 50 percent female volunteers but it hadn’t always been so accepting. Hutton said at least one male volunteer left after she was elected fire chief and others “tolerated it or gained a little respect, I don’t know.”

Current Fire Chief Craig Williams sees Hutton as a trailblazing and passionate educator who effectively taught volunteers and residents alike. She also was instrumental in creating a welcoming environment for other women to volunteer.

“Cherry Grove has a long history of very strong and wonderful leadership from females that is very abnormal in fire service, in general, until just recently,” Williams said.

After stepping down as fire chief in 1994, Hutton continued to work as assistant chief for a few years, helped as a training officer, showed the ropes to her successor, George Oakley, and then worked with young women interested in the fire service through Phoenix Firecamp in Upstate New York.

“I was chief [when I taught at Phoenix Firecamp] and they really highly prized that uniform because when parents came in with their little girls and let them go to camp for the week, here was a full-fledged chief in full uniform to greet them,” Hutton said. “So they saw that women had a place and they could go to the top in the fire service. It wasn’t just a part-time thing.”

Hutton dealt with her share of sexism as fire chief but always approached such situations with a calm demeanor and respect. She recalled an incident in the 1980s, when a fire occurred and the homeowner said, “I had a chimney fire and all that arrived on the truck was a woman in a nightgown,” Hutton recalled. She asked the gentleman, “Would you rather nobody responded?” and emphasized that her firefighters should not be treated any differently because of their gender.

“He agreed and we’ve been really friendly with that man ever since,” Hutton said. “You have to treat people with respect to help make them understand.”

Hutton felt “very honored” to have the new engine dedicated to her but strongly credits success to her fellow volunteers.

“As I stated many times, and I’ll say it again every time I get a chance, I just led a team,” she said. “The team did the work. Those are the ones who let me lead and took the training. They worked hard, they gained respect through their actions and I didn’t do it alone.”

While teaching volunteers how to drive the unusual fire engine, Hutton said many people struggled with sharp turns and a former firefighter once went off the boardwalk, which wasn’t out of the ordinary. Hutton recalled making the woman get back on and drive it home.

“Somebody falls off the horse, you make them get on … if somebody gets hit in the shin with a hockey ball, you make them stay in the game,” she said. “That’s the way we handled those boardwalks.”