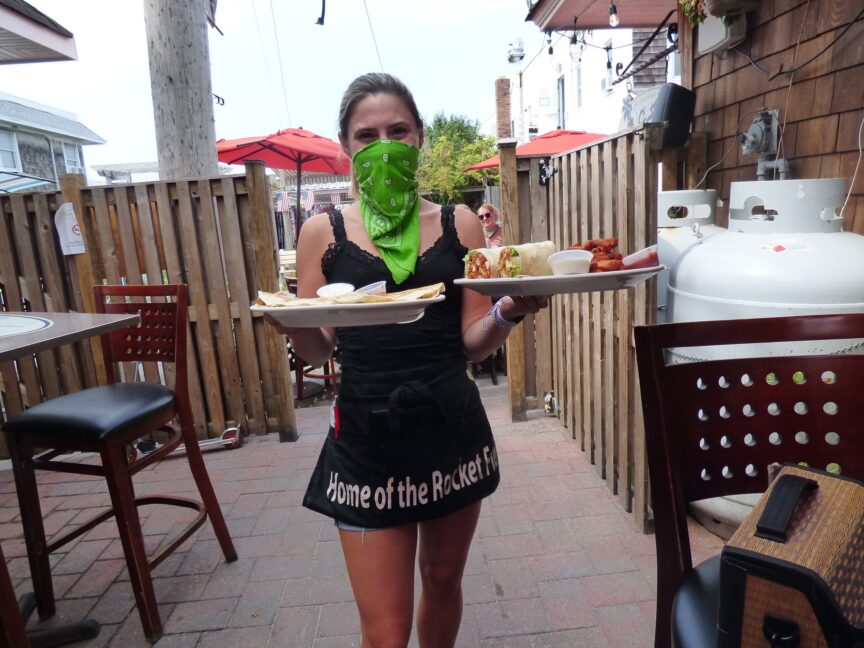 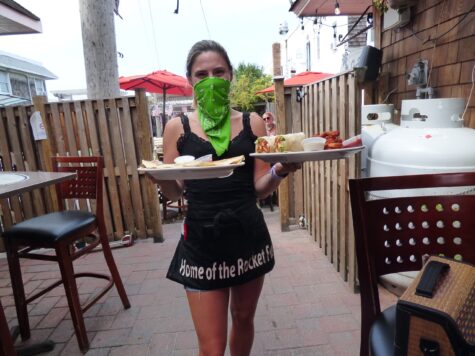 When writing about a longtime local dining establishment, it’s not always about what is new as much as reminding the reader how good we have it. Yes, CJ’s is known as the “Home of the Rocket Fuel” and the place where you get that incredible lobster special, but there are other unsung aspects about it that deserve some ink. So in this unusual summer it’s worth taking another look at this Fire Island institution that has weathered many storms.

Now having spent more than 25 summers on this island, I have had the pleasure of knowing all the proprietors of CJ’s – the legendary Gio in his last years, J.T. who was my husband’s friend and would become mine, and the Mercoglianos who came at a time when the place was at risk of slipping away. A would-be purchaser had walked away after Hurricane Sandy, and its fate was adrift. Saving CJ’s meant it had to evolve yet stay the same, a tall order indeed.

However over seven years later that is now a hurdle cleared. Bobby, Jimmy, Katherine and Brendan keep the place running throughout the year with the efficiency of a Swiss watch. During the winter I see the fat tire beach bikers make their regular journeys there, often decked out in colorful attire.

“Did you try the chili they were serving the other day? They made it with steak!” I overheard one of them say on a blustery day in January.

Then the pandemic hit and being the only year-round restaurant on Fire Island, CJ’s once again found themselves in a cyclone of sorts. When all of us could order take-out only, there were boxes of Rocket Fuels packed up to go, but also a slice of ingenuity as CJ’s came up with offering family size baked dinner specials. When we could dine outdoors they not only opened their red umbrellas, but also continued to innovate – including touchless electronic menus that could be downloaded on your cell phone.

So on this Wednesday afternoon in August we are here, and our waitress is Emma. She showed me how to run my smartphone over the scan code. Old dogs can learn new tricks. Emma is the daughter of Kevin McCarthy, our favorite electrician over at K-Mac Electric and therefore part of the extended Fire Island family.

We had our choice of seating situations, but the patio dining setup looked so inviting. Yes CJ’s does have Rocket Fuels, and they also have Guinness, my husband John’s beverage of 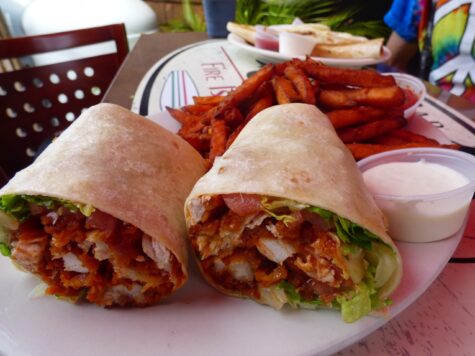 choice so he ordered a tall cold one. The menu is pub food – never underestimate the power of a pub meal, it can cure many spiritual ills. Selections included finger food appetizers like wings, mozzarella sticks, and quesadillas. They also had sandwiches and burgers as well as entrees like flat iron steak or chicken parmigiana. You can’t go wrong with choices like this.

John went for the chicken quesadilla, which is one of his standby favorites at any bar. I ordered their veggie burger, which CJ’s makes especially well, including fixings like lettuce, tomato, onion, hummus and pesto.

Can’t blame Emma for this, or CJ’s. Shortages have become a pandemic thing. That’s okay, recalibrating is part of the Fire Island lifestyle. I ordered the Buffalo chicken wrap with their sweet potato fries on the side instead. It’s good to try something new.

“Look at this,” John said as he started munching on his quesadilla. “Fried chicken, and this is good cheese!”

John made his point well. Good food begins and ends with the ingredients. He was impressed with that quesadilla because it was made with whole breast meat, not some reconstituted nugget thing. The cheese was good because it was the real deal, not a processed concoction. 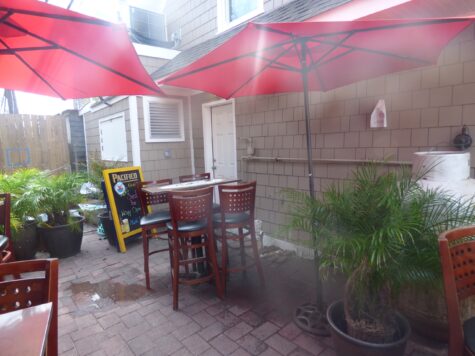 This truth was reflected in my order as well. There are many Buffalo chicken sandwiches out there, but again the tender white breast meat put this one above standard issue. Then there are the finer details. A lesser establishment might have paired it with some generic bottled blue cheese dressing, but the thick, creamy gourmet selection they used made a difference that wasn’t missed on me.

Same with the sweet potato fries, which we both enjoyed. They were thick-cut homemade fries, not something mindlessly thrown from a freezer bag into the fryer.

With generous portions we had leftovers to take home, and Emma came by with sustainably manufactured clam shell containers. Some places fell back into old habits after the pandemic, but responsible decisions still count.

CJ’s will soon celebrate its 50th anniversary of being in operation. A right that has been well earned with every meal and beverage served.

CJ’s Restaurant and Bar is owned by the same parent company of this publication.