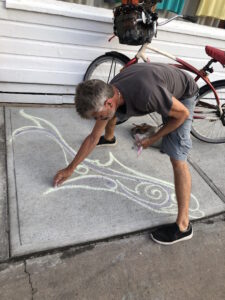 Artist Richie Dziuba creates one of many pieces on the sidewalk during the Seafood and Music Fest.

Our community came together in an exciting new way from Aug. 6-8, as we celebrated together at the first Ocean Beach Seafood and Music Fest. The event, organized by the Chamber of Commerce and sponsored by Fire Island News, drew local residents and visitors alike to Bay Walk for street vendors and performers, carnival games, children’s activities, and seafood specials and musical entertainment on the street and in many establishments.

One word I heard often throughout the planning process for this event and from many of the participants on the street was “collaboration.” Although our local business owners are a cordial group and have always worked fairly closely with each other, property lines and any other differences were blurred even further during these three days. Providing a welcoming, upbeat, family-friendly environment for attendees was truly a collaborative effort, with each business owner and volunteer playing a role.

Another community member fulfilling her civic duty is Theresa Macri of Corneille Estates. It’s now been a year since Macri and friends Sarah Abrams, Patty Burzo, and Rhonda Malhotra got together and unveiled the Little Free Library in front of 19 Surf Road, just over the western border of the Village of Ocean Beach on the Corneille side, north of the ball field. Although the library only covers two square feet and is mounted on a post, it is often bustling with activity.

“It has been very well received and we see lots of turnover,” said Macri. “We are talking about adding another ‘room’ dedicated to children’s books.” The library is part of a nationwide movement begun in Wisconsin in 2009, and was granted a charter last year by the national non-profit. Patrons of the library are encouraged to give a book when they take a book in order to replenish inventory.

“Sarah Abrams suggested the idea and we thought it was wonderful,” added Macri. “Personally, I spend a lot of time in Seattle, which has a ton of them. I was so happy to be able to offer this on Fire Island as well.” The Little Free Library’s organizers may be reached by email at lfl@corneilleestates.com, and all are welcome to participate.

Many thanks to Edith Charlton for suggesting the library as a topic for the column and for her generous support of the Ocean Beach community.

Beautiful lilac-hued vitex shrubs have been blooming all over town for the past several weeks, attracting a host of Monarch butterflies. The butterflies took center stage at a special exhibit displayed from Aug. 5-9, at the Ocean Beach Historical Society and hosted by Seaview’s own butterfly lady, Margaret Hofbeck. When the exhibit, titled “Birth of the Butterflies,” opened on Monday, numerous small enclosures contained plants covered in butterfly chrysalises, which Hofbeck had prepared in the weeks prior. By Wednesday morning, newly formed butterflies had begun to emerge and hang from the plants. After being placed for a time on a nectar-rich flowering plant outside the Community House, the first butterfly was released into the wild on Wednesday afternoon by a group of children that had assembled.

With so many specimens on display, those visiting at any point from Wednesday through Friday could see butterflies in all stages of development from chrysalis to being released. Information on North American Monarch butterfly migration was presented, and Hofbeck spoke about the significance of the oyamel forests in the Michoacán region of Mexico. Each year around Nov. 1, millions of Monarchs return to the fir trees in the region, and the people there have long believed the butterflies to be the spirits of departed loved ones.

The Ocean Beach Community Fund wishes to thank donors for supporting this event, and invites all to attend an exhibit on local homes from the first two decades of the 20th century, which will be running through the end of August. Information for a self-guided walking tour of the oldest homes and other structures will be provided, with then-andnow photos of homes displayed on the walls of the Historical Society’s exhibition space.

The deadline for the installation of new water meters for all structures in the Village of Ocean Beach is March 1, 2020. The new meters employ automatic meter reading technology, a more efficient method for monitoring meter levels. Meters are available free of charge at the village office, and property owners must hire a licensed plumber to install the units on new water mains located toward the front of most structures. Additional information is available on the village website at www.villageofoceanbeach.org.

See my standalone article on page 48, for coverage of the Ocean Beach Community Fund’s annual gala, held on Aug. 3.

Windswept was abuzz the following Saturday as well, as the Ocean Beach Youth Group held their annual “Friendraiser” event. Disc Jockey Ira Zahler handled the turntable, appetizers were supplied by The Landing, and more than $2,000 in donated raffle items were distributed.

Members of the Ocean Beach Association are invited to a sunset happy hour, also at Windswept, from 6:30 to 8:30 p.m., on Saturday, Aug. 24. Bring your own beverages; light drinks and snacks will be served.

Coming on the heels of the Seafood and Music Fest, the annual Arts and Crafts Fair, hosted around the village green by the Ocean Beach Community Fund, was very well attended on Aug. 10 and 11. Artisan Diane Montes noted that she had sold out of nearly all her work by Saturday evening and had nothing to display by Sunday.

The cliffs of August — the sand ledges often created by surf along the ocean beach late in the summer season — turned to almost nothing at all the first weekend of August, with beachgoers sharing a relatively small strip of sand close to the dunes. The jetties have been exposed more dramatically over the last couple of months than in the last few years.

The heat of August will soon be turning to the cool, breezy, postseason. Until then, let’s all continue to work together in harmony. Life is better that way.