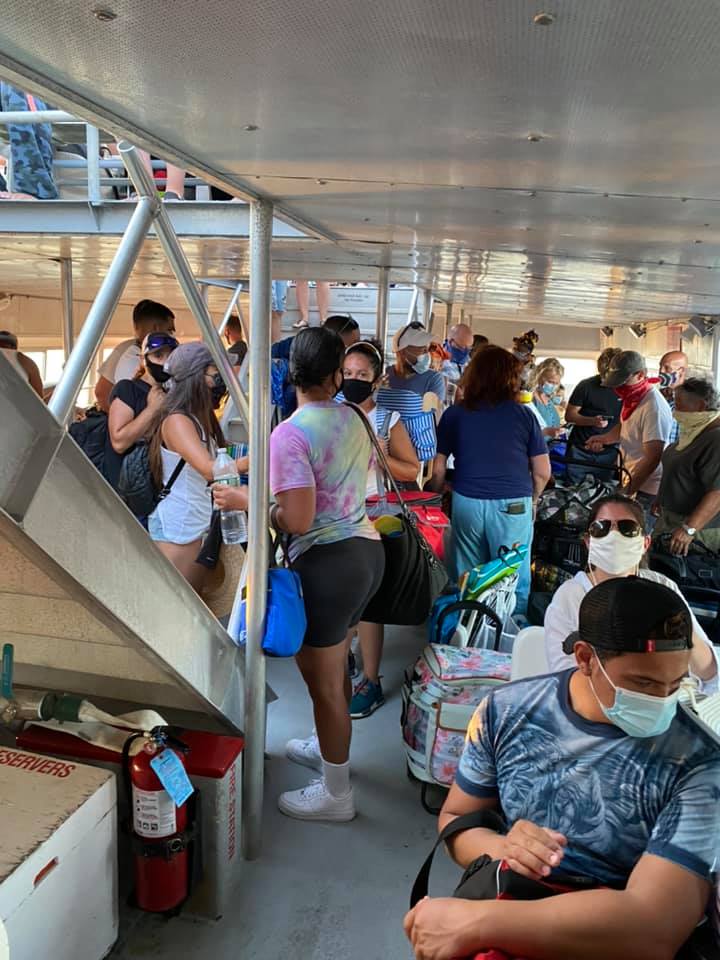 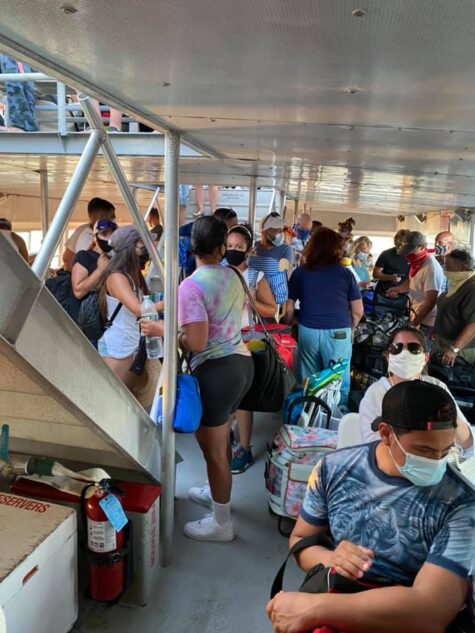 Scene from a recent ferry departing from Sayville, as photographed by a passenger.

By Mariana Dominguez ~ Over the past few months, COVID-19 has changed much in everyone’s daily lives. Social distancing, masks and consistent hand sanitizer use has become the new normal. With summer officially here, visitors have flocked to Fire Island for some much needed fun in the sun. To get there though, it is imperative to stay safe and masked up on the ferries.

According to Charles Sherman of Davis Park Ferries, the majority of customers are compliant with mask regulations. However, the crew must stay vigilant of people pulling their masks down during the ride.

“They always have them on when they get on the boat but they like to take them off so we try to have somebody walking around the boat telling them to put them on,” said Sherman.

On a recent ferry ride to the Fire Island Pines with Sayville Ferry Service, crew members made an announcement before the trip that customers must wear masks for the duration of the ride. Even still, a customer took his mask off while talking on his cell phone. He was promptly talked to and made to put it back on.

Another issue that has come up at Davis Park is inebriated individuals giving crew members a hard time regarding putting on masks.

“When they go over they’re great,” Sherman said. “When they come back, if they have been drinking, they’re a little more difficult to deal with. A couple of inebriated people [refused to wear masks] and the police took them off the boat, but they wised up and put their masks on.”

Inebriation also has been an issue recently in the Fire Island Pines especially on the weekend of the Fourth of July. While masks are required at all times on the ferries, once on the island, enforcement of social distancing protocols is trickier. Despite the cancellation of the annual Invasion of the Pines celebration, house parties were still held on July 4 in the Pines, with many going viral due to their size and lack of social distancing and mask wearing. One party-goer in particular, Corey Hannon, was called out for his social media posts in which he showed pictures of himself at large parties while claiming to still be recovering from COVID-19.

In response, Fire Island Pines Property Owners Association President Jay Pagano released a statement condemning the non-compliance of social distancing and said in part, “We are distressed by the irresponsible behavior of some residents and visitors.” In addition, he clarified that police would be more attentive to partying in the community and that parties on the beach were forbidden.

PJ McAteer, managing director of the Fire Island Pines Commercial District, released a similar statement in which he said, “Mr. Hannon is no longer welcome at any bar or restaurant in Fire Island Pines.”

Even before July 4, social media had been buzzing with comments about lack of social distancing on the beach as well as on the ferries. Despite the mask regulations, ferry rides tend be crowded due to fewer scheduled boats than previous summers. The most common comment on social media is the ferry companies should add more scheduled boats to their schedule in an attempt to prevent overcrowding. As a mass transit service, ferries are not required to enforce social distancing. But the CDC states on their website that, “COVID-19 spreads mainly among people who are in close contact with one another (within about 6 feet), so the use of cloth face coverings is particularly important in settings where people are close to each other or where social distancing is difficult to maintain.”

Because of all of the regulations, and in order to keep both workers and customers safe, the ferry companies have changed some things. At Davis Park Ferries “all books and cards must be preordered…via email or phone call” in order to ensure minimal contact. At Fire Island Ferries, Plexiglas dividers were installed at ticket collection stations; and Sayville Ferry Service began running a separate ferry for customer mail to minimize how much room freight takes up on the passenger ferry, which made social distancing more difficult. However some of the ridership says this is not enough, and a petition is presently circulating on Change.org for the carrier to add more boats to the schedule so that overcrowding conditions might be abated. The petition had slightly over 330 signatures on it  at the time this article went to press.

Sherman admits the regulations can be “a pain in the neck” for his staff to enforce. COVID-19 has changed the world, and that now includes summers on Fire Island.