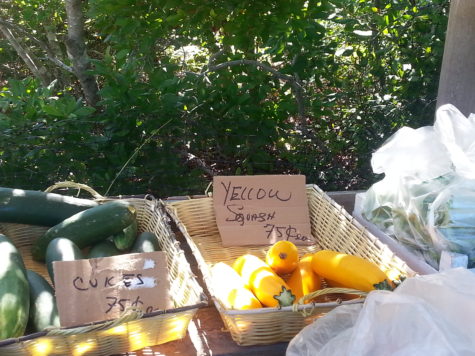 If you already don’t know where to get the best peaches I’ll tell you where. Take a stroll down Dune Walk in the Ocean Ridge side of Davis Park, and you will come along Bush’s Farm Stand. You will most likely be greeted by Ron Bush, with the fresh produce he grows himself. You can get beautiful sunflowers to dress your dinner table too, peppers, corn, tomatoes, you name it and those mouthwatering peaches everyone loves. I heard that some people slice them and put them on the grill with some brown sugar and serve with vanilla ice cream.

I was wondering how this farm stand came about. Ron Bush is a third generation farmer, his wife Nancy told me, and they have been in Davis Park since 1962. The farm stand began when their daughter started selling berries out of her wagon on Pepperidge Walk. They moved to the Ocean Ridge side where the stand itself was built in the 1990s.

Ron spent most of his childhood and part of his adulthood working on local farms owned by his grandfather and uncle. That’s where he fell in love with farming. Besides his stand at Davis Park he owns Bush Farms, which is located on Montauk Highway in Brookhaven.

Ask Ron about his collection of farm tools, trucks, tractors and equipment he keeps in buildings on a former dairy and duck farm in Brookhaven. He accumulated many of the items from his grandfather’s and uncle’s farm, which he had to empty out in the 1970s. Ron also has a museum – the only one like it on Long Island where he has his collection of trucks, tractors, buggies, sleighs and churns.

The museum has a room filled with old photos; some of family including pictures of the farm that he grew up on in Holtsville, as well as his uncle’s farm, Alpin Farm in East Hampton. Ron lived on the Holtsville farm, which was owned by his grandfather Israel Katz until he was in second grade.

Ron continued to work the farm after school and after work while he was running his real estate company, located on Main Street in Patchogue, which he sold in 1999. His wife Nancy became a broker and appraiser. She still sells here on our island of Davis Park. Ron and his daughter have land in Yaphank where they grow the flowers and vegetables that they sell at the stand.

I would also like to talk about their Border Collie Bronco. You would always see him at the stand or on the John Deere tractor with Ron. He also had a special spot on the ferry where he would lay on the floor. Bronco recently passed away at 16 years old. I had the pleasure of meeting Cowgirl, also a Border Collie, their new addition to the family. Cowgirl is 3 months old and loving the beach. I’m sure you will see her riding in that John Deere tractor with all the vegetables and flowers soon.

Ron little farm stand on Dune Walk is open on Friday, Saturday and Sunday. Go down and get your beautiful sunflowers, corn, and don’t forget those peaches!

Thanks to all who participated in our sandcastle contest and congrats to the winners. Don’t forget to stop by the firehouse and enter to win that gorgeous quilt and pick up a T-shirt while you are there.

Mark your calendar for the annual craft fair at the church Labor Day weekend, Sunday, Sept. 4. If you are interested in getting a table please contact Melissa Lund at jmlund@optonline.net or 631-567-9292. The fee is a reasonable $50 per table.

The post office is popular this year as a spot for Pokémon GO. I heard the kids the other day by the benches talking about it. I don’t know if Linda our postmistress is aware of all that, but now she will be.

If you haven’t noticed those pesky mosquitoes are still bad. They are spraying now on Tuesdays and Wednesdays, from 6-10 p.m. One last thing – please clean up after your dogs everyone. We have a station in town with bags. No one wants to see that on the walks. Be considerate!

If you have any news you would like to share please email me at davispark@fireisland-news.com or let me know when you see me around the beach.