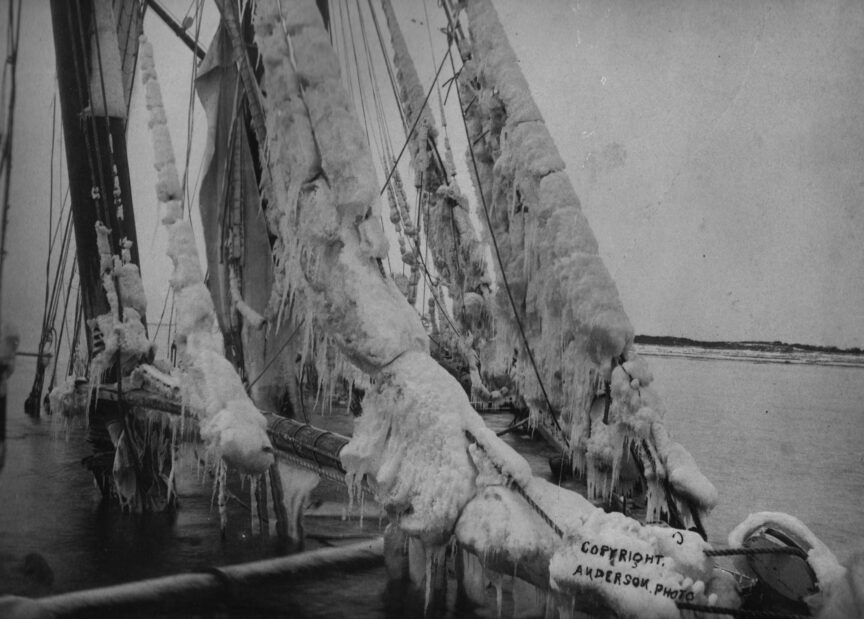 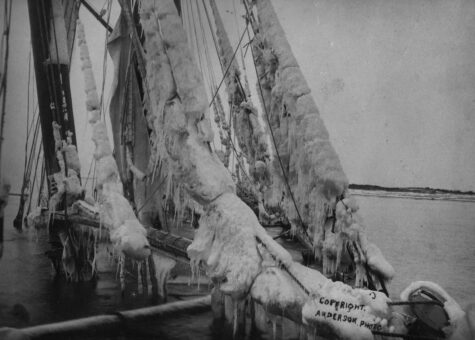 The “Louis V. Place” shrouded in ice off the coast of Fire Island in 1895.

Captain William H. Squires and his crew of seven were exhausted. For the last four days they only had been able to catch intermittent snatches of sleep. Shivering, chilled bone-deep by the freezing conditions of a nasty storm raging from Florida to New England, they beat their way north from Baltimore aboard the 163-foot, three-masted schooner “Louis V. Place.”

On Friday, Feb. 8, 1895, as they approached New York Harbor, the weather, already bad, was rapidly worsening. The crew was forced to reef the upper sails as the winds out of the northeast blew gale force. The remaining sails, as well as the rigging and the hull, were icing over.

The winds shifted again, this time blowing out of the west with even greater fury, setting up a dangerous crossing sea. The snow and salt spray froze layer upon layer of ice on the vessel. The growing weight of the heavy shrouds of topside ice raised the vessel’s center of gravity, threatening its stability. The running gear was frozen in its blocks, the deck a sheet of ice, visibility near zero.

Captain Squires ordered the crew to cut the halyards to douse the sails but the sails were frozen stiff and could not come down. He ordered the anchors let go in an attempt to ride out the storm, but the anchors were imprisoned by ice. The “Louis V. Place” was little more than a “drifting iceberg.” The Captain distributed bracing portions of grog to the crew advising them to don all their heavy weather gear in preparation for whatever fate had in store.

Early that morning a cresting wave lifted the “Louis V. Place” and tossed her onto a sandbar 300 to 400 yards off Fire Island, just east of the Lone Hill Life Saving Station. She hit the bar, bounced once or twice, and then shuddered, broken.

Exposed, with the ship listing heavily to port and seas sweeping its decks, the captain and crew scrambled up the rigging. The snow and sea spray layered them with coats of ice as they struggled to find refuge from the bitter-cold wind. Thunderous waves and screeching winds assailed their ears, their minds. Hypothermia quickly overtook them, hands, arms and legs numb. They had to force open their eyes, their mouths, by conscious acts of will.

Surfman Fred Saunders, U.S. Life Saving Service, making his rounds on the beach that morning, watched as the “Louis V. Place” was pitched aground. He immediately contacted the life saving stations at both Lone Hill and Blue Point for assistance and crews of surfmen quickly assembled with surfboats and the gear necessary for breeches buoy rescues.

The wind gusting from 50 to 70 mph drove the wind-chill factor down to minus 30 F. Twenty-foot breakers crashed onto the beach. Porridge-ice cakes up to 2 feet thick ground against one another in the churning seas. Isolated towers of ice 6 to 8 feet high occasioned the beach. It was impossible to launch a lifeboat.

Within hours Captain Squires frozen body was the first to fall. His body skidded, rattling down the ratlines, and was swept out to sea. The ship’s cook, Charlie Morrison from Brooklyn, was next, falling soundlessly, headfirst. Just before dark the engineer Charles Allen fell backwards, arms outstretched Christ-like. Shortly thereafter the burly crewman, Lars Givby, gave way, and later that night the young Norwegian, Fritz Ward, froze to death, hanging head down in the rigging, held aloft by his lashing, lurching back and forth in the cold, buffeting winds. Death’s cold hand gripped the “Louis V. Place.”

Soren Nelson and Claus Stuven fashioned a shelter of sorts by cutting away the lines furling the mizzen topsail and crawling inside the folds of the sail. Seaman August Olsen attempted to join them but he was below the crosstree, unable to climb, nearly paralyzed by hypothermia. He died that night, frozen to the rigging like a human icicle.

Between snow squalls, when visibility availed, the surfmen fired lines out to the stranded ship. When one of the lines fell close to Claus Stuven he clambered down, numb-clumsy, to fasten the line to the ship but it was ice-caked and too heavy for him. There was no way a breeches buoy rescue could work with the survivors in such extremis. The surfmen needed to launch a lifeboat.

Finally, near midnight Saturday, 40 hours after the “Louis V. Place” had run aground, the weather abated enough to launch a lifeboat into the ice-choked ocean. A crew of seven – six on oars, one on sweep – rowed out into the maelstrom. Growlers of ice pounded the small boat as it made its way alongside the doomed hulk. Upon hearing their rescuers calling for them, the two survivors slowly made their way, hand over hand, boots slipping on the icy ratlines, down the frozen shrouds, stumbling into the welcoming arms of the boat crew.

They were immediately rowed ashore where the rescuers cut the boots off the frozen feet of the survivors, dressed them in warm, dry clothing, rubbing their extremities trying to get their blood circulating. The stricken sailors were transported to a hospital where Nelson died a few days later. Stuven recovered but he was never the same. He took to selling postcards of himself door to door.

Meanwhile, a crowd of a thousand spectators braved the weather, sleighing across the frozen bay to witness the spectacle. They came in such numbers that a roadway through the fallen snow was clearly visible from Bayport to Lone Hill. Somehow, someone in the crowd got his hands on the sailors’ boots, cut them into pieces, and hawked them as souvenirs.

Sunday another lifeboat was launched. The surfmen retrieved the last dead bodies, cutting them, still frozen, from the rigging. The bodies of the dead were transported to the mainland for proper burial.

Several days later Captain Squires’ body washed ashore some 30 miles to the east, opposite his birth place in Good Ground (Hampton Bays). He was buried in the local family plot.

Lars Givby’s body was found near Forge River, Moriches, clutching a length of line in a death grip. He was buried, with the line still in hand, alongside Fitz Ward and August Olsen – three bodies, two coffins, one large grave in a donated plot in Patchogue.

The body of Charles Morrison was never found.

The keeper of the Lone Hill LSS, Sim Baker, stoic on the beach for the duration of the rescue mission suffered chronic frostbite. He contracted double pneumonia and later died.

Within a few weeks the ship itself broke up completely. The Village of Patchogue purchased one of the masts and erected it as a flagpole.

Between the dates Feb. 6 and 9, the surfmen of the USLSS aided 29 vessels that had experienced storm and/or sea related disasters. They rescued 129 crew members and, with the exception of the “Louis V. Place,” did so without the loss of a single life.

This year commemorates the 125th anniversary of the wreck of the ill-fated “Louis V. Place.”