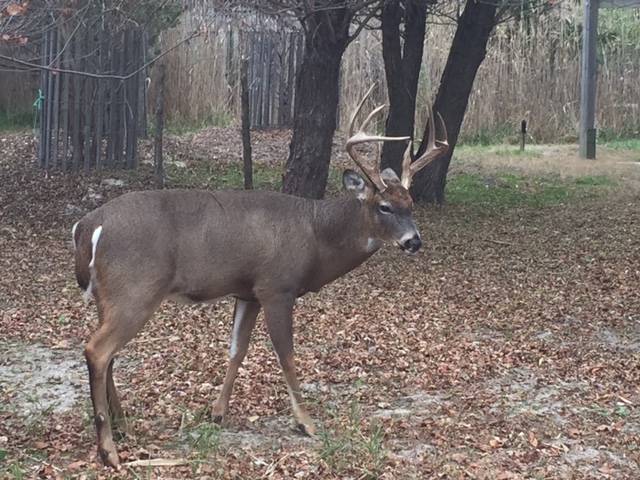 Call it a New Years Day surprise if you will. On what’s ordinarily a slumbering news morning across the nation, many Fire Islanders woke up to learn that the destiny of Fire Island’s white tailed deer population was about to change decisively.

A January 1 Newsday article announced that the 480-page Deer Management Plan EIS (Environmental Impact Statement) that FINS has been working on since 2011 was now entered in the Federal Register in its final form on the last day of 2015. In dry, clinical terms it outlined a plan that would include culling the herd by sharpshooters as the “preferred choice” to manage the population, and euthanasia to “reduce the risk of negative human-deer interactions.” A professionally produced video of 40-seconds in length accompanied the piece, featuring a fresh-faced FINS Wildlife Biologist by the name of Lindsay Ries who spoke to underscore the Park’s position to preserve the fragile ecosystem being the root necessity of this action. The plan is still pending final approval by National Park Service Northeast Regional Director Michael Caldwell after a 30-day waiting period as per the National Environmental Policy Act (NEPA) mandates a NPS EIN must abide by.

Due to the fortuitous timing of the announcement public reaction was slow to start, but soon a public media backlash unfolded over the holiday weekend. How to deal with the white tailed deer on Fire Island has been both a contentious and emotionally charged subject for decades, but what does this latest development really mean for the fate of the animals?

“‘We believe this long-awaited plan provides us the direction to protect the critical resources identified in the Seashore’s enabling legislation,’ said [FINS Superintendent, Chris] Soller,” the press release reads. “The purpose of Fire Island National Seashore’s Deer Plan/EIS is to reduce the impacts from deer on the Seashore’s globally rare maritime forest and historic plantings at the William Floyd Estate.”

The release was shared on the Fire Island National Seashore Facebook page the following Thursday, January 7, of course by then an online petition was already in brisk circulation.

“Obviously, we are very disappointed and strongly oppose the implementation of Alternative D” says “Stephanie Boyles Griffin, Senior Director of Innovative Wildlife Management & Services with the Humane Society of the United States (HSUS.) “We were optimistic that the Seashore would select a modified version of Alternative B after receiving so many public comments in opposition to the use of lethal methods to manage the island’s deer population – especially since the NPS has been conducting a successful, non-lethal deer management study there in cooperation with the HSUS and the residents of Fire Island for almost two decades. Capturing, translocating and/or euthanizing the deer will be indefensibly cruel and traumatic for both the deer and the residents who love them and have worked so hard over the years to develop a humane program for coexisting with them.”

The HSUS partnered with Fire Island National Seashore in back in 1993 for an experimental fertility control program using a contraceptive darts containing an agent called PZP, delivered to the female deer via blow-gun or air-riffle. The study received mixed response on Fire Island during its tenure. Proponents hailed it a great success, while detractors complained it was not doing the job fast enough. HSUS transferred maintenance of the project to FINS in 2005. Shortly thereafter timing of the inoculations became inconsistent, and ultimately abandoned in 2009. Presently HSUS is using the 30-day moratorium to study final report before considering further action.

Boyles Griffin’s remarks can be found in the Public Comment Record as contributor #1600. Identifying names and locations were stripped from the document, but even casual inspection often makes parties identifiable.

APPENDIX E of the Final EIS details that 1631 pieces of correspondence were received during the 60-day public comment period in the late summer of 2014. 94% came from New York, while the remainder came mostly neighboring from states, but a few voices chimed in from as much as 21 states across the country, as well as a handful of comments received abroad from 16 nations. The summary further states that 1,027 comments were “extracted” with 261 comments being determined “substantive” versus 766 as “non-substantive.

Our own analysis of the comments reflected multiple repeats due to users struggling with the NPS website interface. One individual made half-a-dozen individual entries, as the on-line word limit was not long enough to suit their needs.

Public opinion ran the full spectrum, and many were supportive of the FINS plan – some even felt the ultimately adopted “Alternate D” did not go far enough.

“No past efforts have reduced the population of the deer problem on Fire Island. It has only been increasing,… THE RACOON PROBLEM SHOULD ALSO BE ADDRESSED. They are all over the towns in the garbage and living in many houses causing incredible damage to the property.”

“Thank you for inviting the South Shore Waterfowlers Association (SSWA) to comment on the Fire Island National Seashore Draft White-tailed Deer Management Plan and EIS… Many if not most of our members are also Long Island deer hunters, and as such, believe that public hunting should be permitted on public Federal lands and in Federal Parks wherever possible. That said, we also consider ourselves conservationists… By sustaining a public hunt as part of the management plan, you will be increasing public recreational use of the land, secure in the knowledge that its proven effectiveness will help to ensure successful deer management.”

Others like Public Commenter #1488 could maybe use a hearing aid, or perhaps a geography lesson:

“As a person who is an avid visitor to Shelter Island, I am disgusted by what you are doing! As of today, when I was notified of what you are doing, I will NO longer spend my hard earned money or time on this ‘island’! … Your lack of compassion has turned me against paying your salary! I will no longer go to Shelter Island. Instead I will spend the large amount of money I spend there (a few times a year) somewhere else…”

Where Public Commenter #1488 is spot-on however, is that deer management is an issue many areas of Long Island are contending with. Two years ago village and town officials withdrew from a scheduled culling in East Hampton that met vigorous public opposition. Since then East Hampton has moved towards surgical spaying to control the population. However up in the north shore, Town of Huntington passed resolution last September to allow bow hunting of deer in Eaton’s Neck and Ashroken Village, slated to take place in the fall of 2016.

Culling is also a management tool routinely exercised by the NPS. In December Ecologist Magazine reported on a plan by Yellowstone to dispose of up to 1,000 purebred bison in order to control the spread of a disease called brucellosis to neighboring livestock cattle – a move that opponents believe is driven by questionable science to appease agricultural lobbyists.

The EIS summary analysis acknowledges that the implementation of fertility control as a management action was the most common code in the public comment analysis. However at the 2014 open house meetings Superintendent Soller was adamant that PZP was not a federally approved fertility agent for white tailed deer and therefore could not be part of regular management policy of the herd.

Stephanie Boyles Griffin says it is a shame that FINS is being so dismissive for PZP has come a long way since the testing over 20 years ago. In fact the contraceptive is in its final stages of approval by the Environmental Protection Agency, but the EPA application was submitted after the FINS deer plan was initiated.

Other points that were prevalent trends in the public comment analysis as well included surgical sterilization, deer mortality as a result of Hurricane Sandy, public safety if there was a hunt or culling that included the use firearms, as well as interpretation of law and policy. The study was meticulous in acknowledging all matters that were raised by the public, just as it was in using dense verbiage to refute any positions that differed from the report’s stance. Indeed the document bears all the hallmarks of due diligence, but still one gets the impression this process was little more than a rigid exercise to satisfy some foregone conclusion, and this was ultimately a decision that had been underway long before the EIS commenced.

So pending the signature of Superintendent Soller’s boss, is this a done deal carved in stone? “Public engagement has been a major part of the planning process,” writes Elizabeth Rogers. She also gently reminds that there were already two public scoping periods on the subject in 2011 and 2014 – so the windows of certain formal channels are now closed. However FINS in collaboration with the NY Dept. of Environmental Conservation (DEC) conducted an experimental hunt of much more limited scope in 1989, which lead to protests as well as arrests.

“Funding proposals have been submitted to support the management actions set forth in the Final Deer Plan/EIS,” she further writes. “Given the uncertainty of resources no timeline has been developed.” According to the EIS, venison meat will be donated to local food banks, while according to our calculations FINS and NY DEC stands to collect up to $190 in permits, fees and licenses for every hunter who desires the opportunity of seeking such sport on Fire Island.

Public Commenter #1390 was a representative from one of Long Island’s local Native American tribes:

American Indians and Alaska Native people have lived as part of nature for thousands of years. We respect all life and what each species contributes to the hoop of life.

The kill without need (for food to survive or to protect ones family) is a crime against our Mother the earth and the Creator. We humans have changed the world so much that the wild creatures no longer seen to have a place. Your treatment of these deer is so similar to how this country has treated us as Native peoples.

We ask that you not murder these deer but find a more humane way to address the size of the herds. Killing should never be the first option.

Birth control does work – allow life to be the goal not suffering and death. 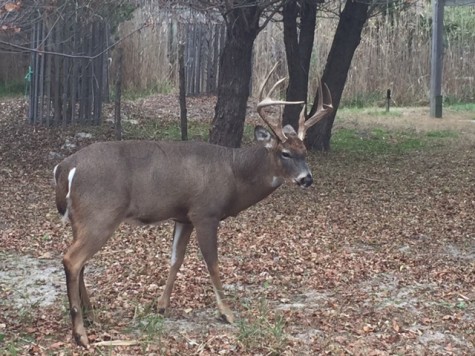 […] present FINS Whitetail Deer Management Plan was entered into the Federal Register on December 31, 2015. However it remained an unfunded mandate […]

[…] many Fire Islanders this feels like the other shoe has finally dropped since FINS announced its Deer Management Environmental Impact Statement was entered in the Federal Register on New Year’s Eve 2015. The following May of 2016, National […]

Shoshanna:
Good article. In 1989 the “hunt” was covered by the FI News and the story of the protests and arrests ran in a winter edition.
You know the women that were arrested at the hunt protest.
Jay

The deer herd has been native to Fire Island for centuries. Killing them is an avoidable tragedy. Birth Control makes as much sense as it does for human population growth. That is the reasonable course of action.

Fire Island is a place to enjoy, not to murder friendly deer. There are other more humane ways.