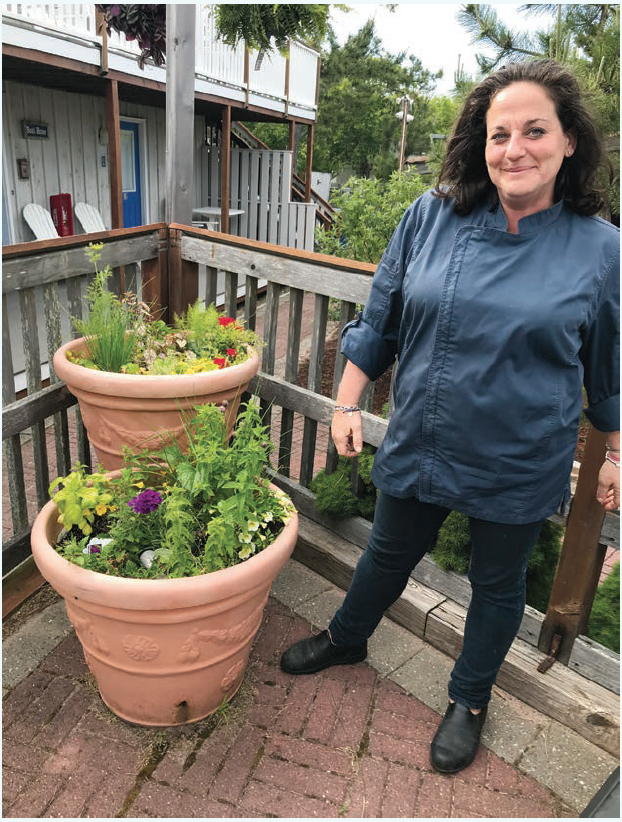 Cooking up a storm of flavor with some of the freshest, homemade dishes on Fire Island is Hurricane’s Bar & Grill, a largely al fresco eatery a stone’s throw from the Atlantic in Ocean Bay Park.

Tucked inside the courtyard at the Fire Island Hotel and Resort, Hurricane’s is a cozy, family- style casual American restaurant and tiki bar offering candlelit bistro dinners and the only poolside dining on the west side of the barrier beach – with a creatively mouthwatering menu to match.

“It’s really like a hidden gem,” said Chef Melissa Dodici, the Johnson & Wales University-trained culinary artist who doubles as the locale’s general manager. “The food’s always been really good. People always say, ‘Oh, my God, how did I never know about this place?’”

Of the about two dozen restaurants that dot Fire Island, Hurricane’s is one of a handful touting an ocean side location. Although it doesn’t offer oceanfront views, it is just steps from the dunes – and it’s more low key than the two bayside spots across town: Flynn’s and the Schooner Inn. It’s not to be confused with Hurricane Grill & Wings, the Florida-based sports bar chain.

Established in 1994, Hurricane’s is currently celebrating its silver anniversary, with Dodici leading the kitchen for most of that time – 23 years, a continuity rarely found among FI chefs. Its founding came five years after the debut of the hotel, which boasts a history as a lifesaving station dating back more than a century with an old watchtower billed as the second tallest building on the island besides the lighthouse.

On a recent visit with this reporter’s wife and daughter, our attentive waitress Gabriella ensured warm and friendly service swift as a breeze. We started things off with the signature beverage – an expertly mixed hurricane, of course, made with Plantation Light and Dark rum.

For the appetizers, we eyed the consummately crisp homemade potato chips served with an amazing caramelized onion and truffle dip, the scrumptious Montauk Mussels in a white wine garlic sauce, and the fried coconut shrimp served with sweet chili sauce that were the perfect combination of crunchy on the outside and succulent on the inside. We also couldn’t resist the pair of local fish tacos, a delightful Cod with Pico de Gallo and an avocado wedge nestled in corn tortillas. Rounding out our opening round was the heavenly blue claw crab cake and field green salad with tomatoes and roasted corn.

Our main course was forecast as the delectable baby back ribs served with smashed potatoes and sautéed summer vegetables. The Mrs. went with the delicious avocado pepper jack burger, aka “the surfer dude,” served with a side of fresh, homemade rip tide fries. Yes, parents, there were chicken fingers and fries for the little one.

When we hurra-come back, we’ll be sure to try the recommended coconut Thai cod served with roasted fennel, ginger, and coconut broth served over basmati rice. The menu includes gluten-free, vegetarian, and vegan options.

Patrons are urged to follow Hurricane’s on Instagram – the handle is @hurricanesobp – to catch wind of specials, such as a burger and a beer for $15 from 6 p.m. to 8 p.m. on Tuesdays, Wednesday all-you-can-eat rib nights, and Thursday family BBQ night. Hurricane’s is also known to make it rain with live music – sometimes a solo artist, other times a band, ranging from jazz to pop – on Saturdays and Sundays. As an added bonus, those who eat at Hurricane’s are welcome to use the pool. Of course, being located at a hotel, the restaurant also plays host to numerous weddings, private parties, and other catered events.

What really blew us away was Dodici’s commitment to using only the freshest ingredients. The fish is fresh caught from the folks at White Cap Fish Market right across the Great South Bay in Islip. Dodici is so dedicated to freshness that she can often be seen picking herbs – mint, basil, fennel, and more – as well as peppers in her garden growing right in the outdoor seating area.

“I try to make everything as homey and fresh as I can,” she said. “I try to put a really homemade twist on my menu.” This is one hurricane we’re happy to have hit home.