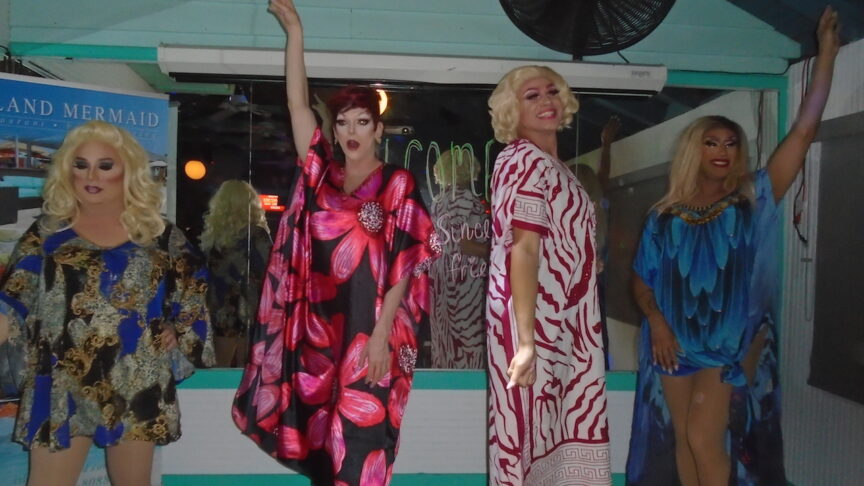 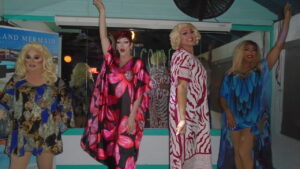 Island Mermaids: The only regular venue for drag performances west of the Grove can be found here. Pictured are Ariel Sinclair, FiFi DuBois, Victoria Falls and Brenda Dharling.

Scott Hirsch brought a new culture to Ocean Beach. He began with drag shows many years ago bringing Cherry Grove icons to perform at his restaurant the Island Mermaid. On Sunday, July 7, Cherry Grove’s superstar Ariel Sinclair was the MC for a production introducing other Cherry Grove celebrities. Ariel has been doing her shows for more than 12 years. Her future performances are Sunday, July 28; Sunday, Aug. 11; and Sunday, Aug. 25, at the Island Mermaid. Ariel also does drag bingo every Tuesday night, from 9-10:30 p.m., for the rest of the season, and has been doing this for the past five years.

Victoria Falls, FiFi DuBois and Brenda Dharling brought glitz, glamour, radiance and opulence in all sizes: extra small, small, medium and tall. They performed as a group and then individually doing at least two or three numbers each with costume changes. The audience was thrilled and excited by such a creative and different kind of entertainment. 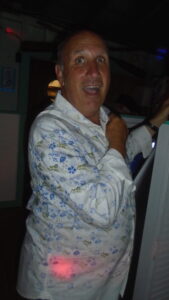 I was there at that same space in the 60s and 70s when it was called Goldie’s. Goldie Hawkins was proprietor and host and he played the piano during dinner. After dinner there was an open mic with locals and celebrities like Ethel Merman and others who would graciously come up and sing at random. We all thank Scott for introducing Ocean Beach to this wonderful kind of entertainment that we have been doing in Cherry Grove since 1948, at least a half-century.

Prior to the show, Michael Fitzgerald and I arrived at the Island Mermaid where we had drinks and calamari at the bar. Our waitress, Christina, was very accommodating and pleasant as were our bartenders, Joe and Vicky. The calamari was served with a spicy almond and red wine tomato dipping sauce, which was delicious and refreshing. We were pleasantly conversing with friendly and welcoming people at the bar and made new friends before we sat down for dinner on the dining deck. Our seating was on the bay with a beautiful view of the Captree Bridge and the mainland east and west. The evening was warm, with a romantic atmosphere like an island in the Mediterranean. Luckily, the night was perfect with blue skies, but even if it were to rain they would put up a tent so that one could enjoy the same view.

Michael and I enjoyed a ribeye steak, which was cooked to our liking; it was tender and delicious. It was served with mashed potatoes and assorted vegetables, which were fresh and tasty. The menu was extensive with many choices such as Linguini Frutti di Mare with shrimp, mussels, clams, scallops, white wine, lemon ricotta and tomato concassé, and also Murray Organic Chicken Breast with cauliflower puree, roasted cauliflower, baby carrots and wild mushrooms. 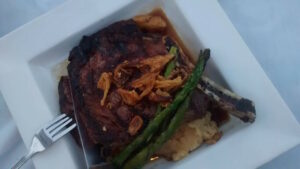 Ribeye steak was one of the mouth-watering daily specials.

I enjoyed my Pinot Grigio and Michael had his tequila and grapefruit juice while admiring the view throughout the evening. The list of desserts was beyond anything I would order since I am watching my weight and figure. We saw other diners enjoying delicious desserts such as the warm Chocolate Bomb, a chocolate lava cake with chocolate sauce, fresh whipped cream and strawberries. Other famous Island Mermaid desserts are the Key Lime Cheesecake with a coconut cookie, raspberry sauce, Ginger cracker crust and fresh whipped cream, and the warm Blueberry Tartlet with brown sugar crumble and vanilla ice cream.

We enjoyed our night in another community of Fire Island where we were graciously welcomed! We look forward to another evening at the Island Mermaid on the bay in Ocean Beach.