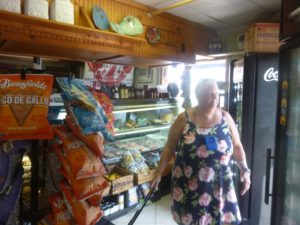 Matty’s Gourmet Market is a natural offshoot of its namesake seafood restaurant located on the eastern cusp of Ocean Beach. The modestly sized front alcove to the same building is where patrons can purchase the same high quality fish and seafood to cook at home. From there the idea grew, why not offer fine cheeses and specialty pantry items as well? Fact is the market has been around for years, and while it stands in plain sight, somehow it remains a best-kept secret.

This is where one goes for fine imported pastas when that box of spaghetti on your average grocery store shelf simply just won’t do. This is where you will return for that jar of boutique cannery pickles, because now you are forever spoiled, and now those supermarket dills seem dreary in comparision. Matty’s Gourmet Market is where Fire Islanders go for all things eclectic to grace their kitchens and dinner tables.

If I was a better cook, perhaps I would have splurged on the fresh salmon or sea scallops – but then it would have been a review of my lackluster cooking – so I went for the prepared items. Yes, a fine meal on the go is possible at Matty’s Gourmet Market. They had an interesting selection of sandwiches, wraps, and salads to choose from.

Some of the sandwiches listed on the menu board included the Spicy Tuna Wrap: Seared tuna, seaweed salad, red onion, and avocado; the Turkey Asiago included smoked Gouda, bacon, lettuce and tomato on rosemary garlic bread; and of course their Lobster Roll – say no more. However it was the middle of the week when supplies can run low, and not all selections were available. The final order was something of a negotiation – a Caesar salad chicken wrap for my husband, and a shrimp salad wrap for myself – the basics, but you can tell much about an establishment by how they handle the basics.

The Romaine lettuce in the Caesar wrap was fresh, and the tender white meat chicken was housed in a nice spinach wrap and just the right amount of lemon in the dressing. The shrimp salad wrap was not just canned shrimp drowned in mayonnaise like average delis often do, but a true salad with spring greens, tomatoes, and of course fresh shrimp.

Because we both like artichokes, I took a chance on a side of their artichoke salad. We were pleasantly surprised that you could actually taste the artichoke. Some artichoke salads are bathed in heavy oil that overpowers and defeats the purpose – not in this case – a little vinegar kept the salad fresh and real. To be honest a quarter pound of that spread over some of the crusty artisan bread they also sold could have been a great light meal in this summer heat, and next time that is exactly what we might do.

Their small refrigerator case offered an interesting selection of beverages, again not the same old boring things that are sold elsewhere. I finally settled on a tall cool container of something called Argo Tea, which was lovely – iced tea, lemonade, and a hint of hibiscus flower – it was like an upscale Arnold Palmer, not too sweet and simply amazing.

For dessert, the caramel cheesecake spoke to me, which is odd, because visually it did not look like much in the round “snack cake” packaging, but appearances can be deceptive and my instincts were spot on. It was a delightfully creamy confection, in a portion size that made sense.

I also squirreled away a can of canned cold brew coffee for work at the school the next day. The brand they sell is Hey Day fair trade coffee, which is sold in a variety of flavors. I tried the vanilla, and hope to try the chocolate, as well as the espresso, another time. It was a great pick-me-up indeed.

It should be stressed that Matty’s Gourmet Market is not the place to run and get a quart of milk, eggs, suntan lotion or other essentials that you may have left behind on the mainland. However it is a place where you can escape the mundane. If you have not tried it yet, what are you waiting for?

Catering is available, and a curated selection of giftware is also for sale on premises.