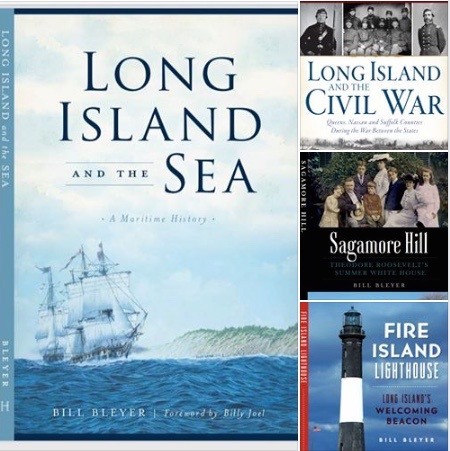 Pulitzer-prize winning journalist and author Bill Bleyer joins us this summer for a series of six lectures based on books that he has published. All classes live streaming via ZOOM, every Wednesday from 6:30 – 7:30 p.m, with a $20 registration fee which covers all six lectures. Itinerary is as follows:

July 8 ~ Long Island and Whaling: A PowerPoint lecture that covers from the Native Americans who hunted whales offshore from canoes, to the first whaling companies in America in Southampton, to the rise of industrial-scale whaling in Sag Harbor, Greenport and Cold Spring Harbor, to the famous whaler Mercator Cooper and his trip to the closed society of Japan, to the demise of the industry from the Gold Rush, the Civil War and the discovery of oil in Pennsylvania.

July 15 ~“Little Known Aspects of Long Island’s Maritime History:”  A PowerPoint lecture that covers the development of submarines and torpedoes, the landing of Pan Am Clippers in Port Washington, the world’s most innovative whaling captain, and more.

July 22 ~ “Long Island Naval History in Wartime” A PowerPoint lecture that begins with the country’s first amphibious landing on Plum Island, the British blockade including the wreck of HMS Culloden, and the Meigs and other whaleboat raids; submarine warfare and the wreck of the British 22-gun sloop-of-war Sylph during the War of 1812;  Confederate raiders capturing Union shipping just offshore during the Civil War; the sinking of the only American capital warship in World War I off Fire Island; and U-boats dropping off spies and attacking commercial vessels during World War II.

August 5 ~ “The Fire Island Lighthouse: America’s Most Important”: A PowerPoint lecture that covers how shipwrecks offshore dating from colonial times prompted construction of the first lighthouse on Fire Island in 1826; the inadequacies of that lighthouse that led to construction of a new taller tower in 1858; the development of improved lighthouse illumination apparatus including the Fresnel lens;  the Fire Island lightships that were anchored offshore to augment the new lighthouse; how the lighthouse was shut down by the Coast Guard at the end of 1973 and replaced by a light on the water tower at Robert Moses State Park; how the structures on the closed site deteriorated and the Fire Island Lighthouse Preservation Society was formed in 1982 to restore the property and re-lit the tower in 1986; how the original Fresnel lens was brought back from Philadelphia and displayed in a new building in 2011; and the society’s future plans for bringing back additional artifacts for display.

August 12 ~ “Long Island and the Civil War”:A PowerPoint lecture that covers the patriotism and pacifism that followed the outbreak of the war, Lincoln’s visit to Long Island, local soldiers, efforts on the home front, postwar memorials to the soldiers and more.