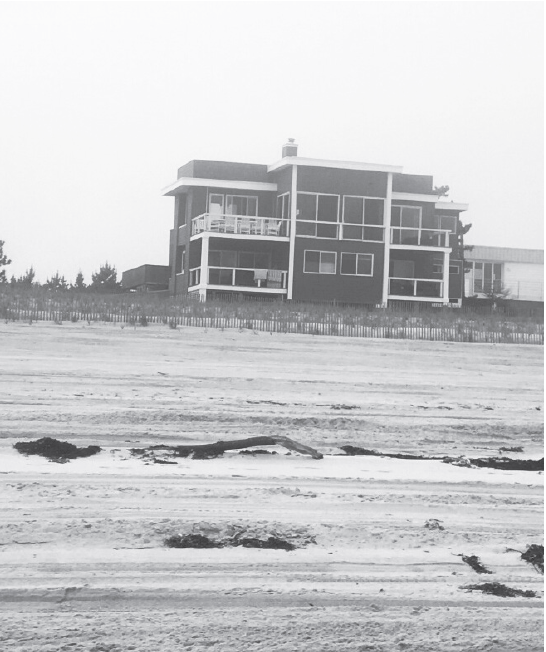 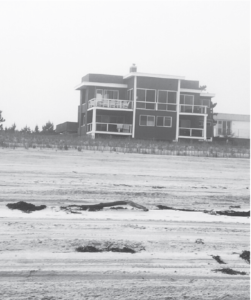 This is what the Claiborne house looks like today. It has undergone renovations
since she and her husband died. (Photo Lauren Chenault)

The late Liz Claiborne’s former estate, the last bay-to-ocean private property on western Fire Island – one of only six like it on the barrier beach – is slated to be subdivided by developers.

At a May 16 meeting held nine days before Saltaire’s elections, the village board took seven minutes to approve the buyer’s request to carve up the land into three lots and build two new homes, the culmination of a year and a half of debate over the issue. The buyer will pay for the $60,000 extension of Richards Walk south of Lighthouse Prominade to accommodate the new homes, village officials said.

“We determined at the…hearing that it would not change the character of the village or put any sort of undue burden on the village,” said Deputy Mayor Hillary Richard, although Trustee Hugh O’Brien questioned how the construction wouldn’t have any impact at all.

Out of about 4,000 homes on the 32-mile-long island, the other five privately owned bay-to-ocean lots on FI are all in Water Island and Blue Point Beach areas, two of the easternmost communities, according to the Fire Island National Seashore.

Claiborne, the fashion icon, was arguably Saltaire’s most famous resident until she died in 2007. Her four-acre estate was listed for $7.9 million after her husband and business partner, Arthur Orternberg, died in 2014. The property was in contract the following January, but to date, the buyer’s identity and sale price has remained under wraps – although both may become public once the deal closes.

“The sale is contingent on approval from the village and the county to subdivide the property,” The Wall Street Journal reported in 2015.

Now that Saltaire has approved the subdivision, following the Suffolk County Planning Commission’s determination that it was up to the village since “there were no issues of regional significance,” the closing is expected to follow. The exact closing date was not immediately clear.

The applicant for the subdivision has so far only been identified as Village People LLC – a corporation formed in 2014, not to be confused with the disco troupe known for songs about the YMCA, the Navy and Cherry Grove’s meat rack. The principal of the corporation is listed as an official with a Manhattan-based title agency, but the name confused some residents into thinking that the village itself was buying the land – a point Saltaire officials have had to repeatedly clarify while remaining tight-lipped about who is actually behind the corporation.

Other than those few details, all that is publicly known is that the buyer is “in part are related to” Mayor John Zaccaro, since that’s the reason he gave for recusing himself from debating or voting on the issue, leaving Deputy Mayor Richard to lead the discussion. Zaccaro is the son of former U.S. Rep. Geraldine Ferraro (D-Queens), the first female candidate on a major party line. Zaccaro and Richard were re-elected over Memorial Day weekend.

The Claiborne property has a dock in Clam Pond cove that links with Pennant Walk, a private boardwalk leading up to the oceanfront compound. It made headlines eight years ago when Ortenberg lifted a 1985 covenant preserving two undeveloped oceanfront lots the couple had donated to the village to be preserved. After a seven-year legal battle with neighbors, the New York State Court of Appeals affirmed the village’s right to sell the land. Daniel Rappaport, one of the neighbors who sued to block the sale, won a silent auction for the land with his $1.9 million bid, money the village used to build a new market as a part of its Sandy recovery efforts.

“We bought it at a time that we wanted to keep the community as simple and unpopulated as possible,” Ortenberg, reflecting on the preserved lot, had told FIN in 2011. Billed as an act of environmental preservation, it also had the benefit of keeping any new neighbors from building a new home too close for comfort for Claiborne and Ortenberg while the couple was alive.

Following the subdivision, the existing Claiborne house will have a one-acre buffer and two nearby lots – one 13,600 square feet and the other 18,700 square feet – will be where a pair of new homes are to be built, records show. The estate’s undeveloped acreage north of Lighthouse Walk is not subject to the subdivision.