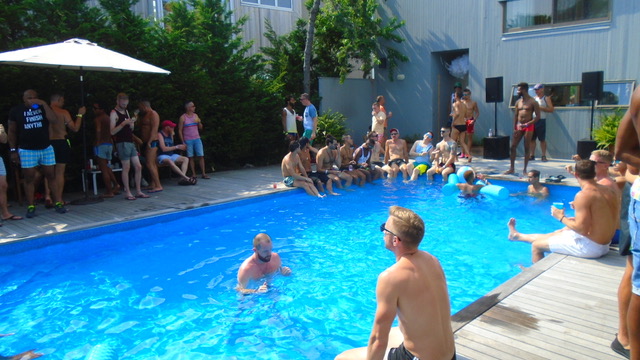 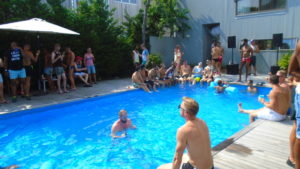 All this and more describes the 2017 Pines Party held on July 22 from 10 p.m.-7 a.m. At an estimated 3,000 people, a record-breaking attendance was part of the many events that were included for the weekend. The big party was held on the Pines beach from Fisherman Walk and due east. A dance floor, a DJ booth, and sound system were set-up so that tunes with DJs Ralph Rosario and Tom Stephan could spin. Bars, cabanas, rest rooms, a first aid area, and all the conveniences were provided. The rain, which began around midnight, did not stop the party revelers from enjoying the great mixes of the DJs, they kept dancing till daybreak.

There was also a VIP Night kickoff party on Friday night at the Pines Club. The morning party was held at The Pavilion on Sunday, from 6:30 a.m. through noon. A pool party was held on Sunday afternoon. The after party, aptly themed Icarus, was held at Jim Pepper’s Bayfront Home.

We thank all the many volunteers including Randy Wilson, Linda Gottlieb, John Wood, Marc Cote, Jay Henry, Greg Dyer, Michael Cluer, Alan Baum, and Ed Schulhafer, among others, who were responsible for organizing and working so hard to make this such a special weekend. The event beneficiaries are Stonewall Community Foundation, and The Pines Foundation a nonprofit affiliate of (FIPPOA). I personally met many friends at the pool party, including Chris Coad and Kevin Kowalski, who lost their house in the June fire and are temporarily living at the co-ops. I also saw P.J. Sweeney and Donnie Leister from Ft. Lauderdale, Jeanette Roca, Jen Shandon, Kevin Clifford, Tom Giordano, Ken Pollard, Tom Bozzelli, Jerry Gaschen, Larry Tallamy, Jay Pagano, Hal Hayes, Davis Sloan and many others.

The Gotham Volley Ball League had their annual tournament on the beach between the Grove and the Pines. A total of 274 people were part of 52 teams that played. Jack Christensen has been tournament director since 2005. Lou Smith is his assistant. Bob Acri tracks the score. The proceeds are donated to the Pines Dune Fund. The League wants to thank Josh Orcutt and Patrick Baricher for graciously housing the equipment from year to year.

Bobby Michel had a special guest for a long weekend. David Kotick just became a nonagenarian celebrating 90 years of youth. He was born and raised in NYC. He started summering in Cherry Grove back in the 1950s, and would continue to do so for the next two decades. Now he lives in Ulster County. He joined Bobby for bingo in the Pines on Thursday, and went to the Grove to see Michele Balan on Saturday night.

Lila Swell returned to the Pines after spending one week in Asheville, North Carolina, where she attended a Pie Contest. She tasted the most pies and won first prize.

Seen at Low Tea Dance having a ball with the guys was SNL’s very own Rachel Dratch.

Jennifer Hartstein who frequently visits her Pines parents, Mike and Laura, is a child psychiatrist. She is often featured on the “Today Show” with Hoda and Kathie Lee. I saw her segment last week.

The Northport Long Island Running Club had their 42nd run on Fire Island. Twenty-five runners took the Ferry to the Pines and ran through the neighboring communities to Kismet. Stuart McCloud and Alan Englisher are the tour guides; I spoke to them when they passed through Cherry Grove.

Randy Wilson has been working on a project called Lighting The Harbor in the Pines. It is nearing completion. They are using state-of-the-art LED hurricane-proof lighting.

Women’s Pride in the Pines was another special event. Read my separate article coverage on Page 37.

Our sincere condolences to Andrew Kirtzman on the loss of his beloved mother Doris, who lived in Ocean Beach for many years. Andrew grew up in Ocean Beach.

• The 16th Bi-Annual Pines Art Show will be held at Whyte Hall on Aug. 5. The exhibition is open to the general public from 1-3 p.m. Admission is $5; FIPAP members are free.

• The weekend of Aug. 11, enjoy a SPRAY weekend of hedonism and activism by the beach. For details, visit sprayfireisland.com.

• Sen. Kirsten Gillibrand returns to the Pines on Aug. 12 for her annual fundraiser event, sponsored by Robbie Regina at 396 Ocean Walk at 12:30 p.m.

• The Pines Conservation Society will sponsor a native plant tour featuring several properties, including the Carrington Estate on Aug. 19, from 11 a.m. to 1 p.m. Tickets are $20 and available at the Harbor or pcs.com.

• On Aug. 26, Daniel Nardicio presents ”Bette, Bath House and Beyond,” an evening celebrating Bette Midler at the Continental Baths in 1971. Amber Martin will re-create the historic evening. Tickets available at danielnardicio.com.