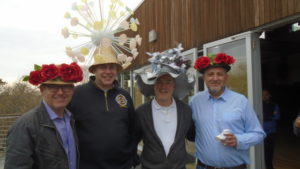 Welcome to the Pines Season 2018. The harbor looks beautiful with new trees, sidings, decks and fences. We know John Whyte is looking down on us and is very proud to know that we are keeping the spirit alive.

This past October, the Madison celebrated its 10th anniversary with an afternoon concert of “Falsetto’s,” featuring Michael Ruppert, who was the star in the original production when it opened off-Broadway in NYC. William Finn, who wrote the music and lyrics was to be the special guest of honor, but had to cancel at the last minute. In addition to Michael, Broadway’s David Zippel and 13-year-old Peyton Lusk appeared with Christine Pedi, who has been the MC for the past five years. Peyton, a talented young actor, was the Bar Mitzvah boy in “ Falsettos.” He was a cast member in “Frankenstein” at the Signature Theatre this past winter. In February, he also appeared as the star in the Jule Styne show “Bar Mitzvah Boy,” at the York Theatre MUFTI series. Peyton recently celebrated his own Bar Mitzvah at Fire Island Synagogue.

As we have done for the past 20 years, Michael Fitzgerald and I attended Barbara Sahlman’s wonderful Thanksgiving dinner. Many people from the Pines were in attendance. We also attended the annual Christmas party at the beautiful home of Michael DeFalco and Bill Matthews in Parsippany, New Jersey. We had brunch with John and Ellen Putnam, as well as dinner at Lila Swell’s penthouse in NYC.

Have you seen Roy Yaeger in that medical ad on TV? Another Fire Island resident from Water Island, Kyle Merker, who worked in Cherry Grove at The Monster during the 70s when he was a young medical student, became a doctor, and for the past year he has been appearing on an Ancestry. com commercial trading his lederhosen in for a kilt.

Palm Springs had a Pines Weekend Party invasion in February. The party began on Friday night and all Pines residents were invited. Phillip Grossi and Stacey Brooks had a housewarming at their new Palm Beach home. On Saturday Bradford Price and Stuart Esack, who owns the “Price Waterhouse” yacht, which they dock in the Pines, had a major welcome party and invited Phillip and Stacey, John and Ellen Feldman-Putnam, Mike and Laura Hartstein, Lori and Fern, Lori and Eric Schrader, Michael Keller and Dan Veale, who also dock their yacht “Christina Tamara” in the Pines Harbor.

James Gedge, who lives at the Co-Ops, was leisurely walking around the harbor with his dog Gracie, when I ran into him. James has lived in the Pines for many years. He appeared in many of the Pines FIPPAP productions as musical director, lead singer and a chorus member. Among the shows were: “Little Mary Sunshine,” “Babes in Arms,” “Porter in the Pines,” “Can’t Help Lovin’ That Man” and “Little Shop of Horrors.” For the past four years he has been a member of the Pines Fire Department and also a board member for the Co-Ops.

Laura Hiam has lived in the Pines for many years. Over the past two years, she has worked in France with President Emmanuel Macron. She now lives in Chicago. Recently she appeared on MSNBC reporting as a foreign correspondent on “The Last Word” with Laurence O’Donnell. We call Laura the French Rachel Maddow.

Gil Neary and Scott Riedel officially opened the party season on Saturday, April 28, to celebrate Gil’s birthday. At least 250 people were there to toast, drink, dance, meet and greet with an open bar and DJ Thom Ford. The party ended in the wee hours of the morning. Some wound up at Sip-N-Twirl for milk shakes.

Robin Byrd has a new 14-week-old Yorkshire terrier, Om Om, that she got in Connecticut. At least 30 members of the FIP Fire Department attended the first breakfast of the season at their new firehouse, next to the old firehouse, which they will use for meetings, office space and social events.

Sip-N-Twirl had its annual Kentucky Derby Party, which also coincided with Cinco de Mayo. It was a successful turnout with many people wearing festive hats and fascinators such as David Seeds, Boo, Lila, Michael Greenberg, Goeff Capes, Steven Weisman, Mike Stark and many others. The Pavilion has a new Sunday evening event, Show Tune Sunday, which began in early May, featuring movies, music and lots of fun.

Symphony Space had a Jerry Herman retrospective on May 7, which I attended. Jerry lived in the Grove from 1959 to 1963 and then bought his first home in the Pines after “Milk and Honey” and “Hello, Dolly” became major hits on Broadway. Jerry now lives in Miami, Florida. We cannot forget Jerry!

This past year we lost some very prominent members of the Pines. The legendary Sandy Paul arrived in the Pines in the 70s. She worked with The Islanders Bus Co. for many years. She participated in all the major parties and was famous for her “flagging.” She was the Barefoot Contessa of the Pines. She always had a smile on her face and her arms were always extended to welcome you. Louis Malkin, who left the Pines 11 years ago with his partner of 58 years, Dino Di Georgio, died last September. He was an elegant man with extraordinary taste. He was the interior designer for Joan Rivers, Diahann Carroll and Lorraine Hansbury, among others. Barry Leighton a longtime resident of the Pines, Stuart Slickman and Karl Kemp will also be missed. Rita Lichtenstein was another legend. She and her husband, Jack, with their two children, came to the Pines in 1963. She was a board member with FIPPOA, FIPAP and the Pines Conservation Society. Rita was an elegant lady who was kind to everyone. She was smart, intelligent and bright. She was also one of my closest friends and we will miss her.

• SAGE will hold its 26th Annual Celebration Fundraiser on Saturday, June 2, at the home of Dr. Ed Schulhafer and Crayton Robey, from 4-6 p.m. This year they honor Frank Liberto and Allan Baum with the SAGE Pins Leadership Award; and Ariadne Villarreal with the Doric Taussig Award for Community Service. #SAGEPines for tickets and more info.

• On Saturday, June 9, the community will have their Tag Sale at the Harbor, from 10:30 a.m.-2:30 p.m. The Pines & Grove Interfaith Association, St. Lawrence Catholic Church, Congregation B’Nai Olam and St. Ann’s Episcopal Church sponsor this event.