An invitation was sent out for a party given by Kit and Joe at Grey Gardens on Bay Walk, Wednesday, July 29, 1981, at 4:30 a.m., to celebrate the wedding of Prince Charles and Lady Diana. Of course I was there. On Saturday, May 19, 2018, the entire world watched the royal wedding of their son, Prince Harry and Meghan Markle. We got up at 5:30 a.m. to watch this historical event. Then I remembered that I had an invitation, which was on my bulletin board. It was still there 37 years later.

Speaking of royal weddings, on May 19 we we’re invited to the wedding of Susan Lambert and Claude Kerven at a beautiful ocean front house in the Pines. Susan has been coming to the Pines for 20 years and wanted to be married in the Pines. She had five of her best girlfriends as attendants. Claude had two of his childhood friends, David Broffman and Danny Rubin. They were 8 years old when they met. His third best man was Susan’s son, Will Antoniou. At least 80 people were in attendance. Many friends arrived from various cities in the U.S., including New York City and Boston. They came for the weekend or for the day. Todd Ericson from Coastal Roots in the Grove did all the beautiful flower arrangements. Stephen G. Daniello of Share Chef, was the caterer. Chicken, pasta, London broil, eggplant, salads, and other delicious food were beautifully presented and served. Although the weather was dull and dreary that day, the atmosphere in the house was full of love, friendship, and excitement. 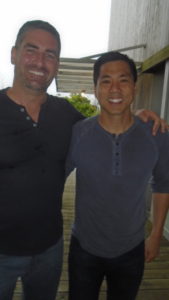 Lambda Attorney Evan Wolfson represented Boy Scout James Dale in a New Jersey Court in 1990. James came out as gay and the Boy Scouts of America actually expelled him. In 2000, his case went to the Supreme Court. In July 1994, Michael Fitzgerald and I hosted a Lambda party in the Grove. The guest of honor was James Dale who now owns a house in the Pines with his partner David Lam. Welcome to the Pines.

I attended a talk in NYC at NeueHouse on East 25th Street in Manhattan. Award-winning journalist Laura Hiam was interviewed for one hour in “Conversation with Melissa Ceria.” She spoke about her political career, including her involvement with Donald Trump and Emmanuel Macron. The evening was very stimulating. Laura visited the Pines on Memorial Day weekend, before heading back to Chicago.

The annual Doctor’s Fund Welcome Party was held at Whyte Hall. President Stephen Hayes welcomed and thanked many guests who attended. Elinor Gum, who has worked in the doctor’s office for many years, got a special thank you. Additional thanks went to Sara Jeffrey, Michael Borofsky, Walter and Karen Boss, the bartenders, all the doctors, board members, the Pines Fire Department, and FIPOA.

Welcome Shiv Paul who recently bought an apartment in the Co-ops. Regards from Tony La Rocco and Bill Moore who are still in Ft. Lauderdale; they left the Pines last October. Margot and David Blum have returned to Water Island for the summer, from their residence in Owens Mills, Maryland. Amber Laign returned to the Pines as a houseguest of Sloan Scherr. Her partner Robin Roberts from “Good Morning America” was in London covering the royal wedding.

We say farewell to John Conboy who recently passed away. He lived in the Grove with his late partner Bob Messner in the 1950s, then moved to the Pines, where they lived happily for many years.

The Mobile Access Cart Service is up and operating, as it has for the past 20 years. Kent Dillon has been driving for the past 11 years. The Pines Post Office is very busy receiving 60 to 80 packages three times a week from Amazon or just normal usage. Douglas Wolff is the postmaster and Kent Dillon is assistant postmaster. PO boxes are available; if you want one, walk in and apply.

June 16: FIPAP is sponsoring Rat Pack Casino Night at Whyte Hall, from 6-10 p.m. Ongoing Mass begins at Whyte Hall every Sunday, at 12:30 p.m., through September. Enjoy late night piano bar with Jack Aaronson at the Blue Whale, on Friday, Saturday, and Sunday, from 10 p.m.-2 a.m. Also at the Blue Whale is Bingo every Wednesday, at 8 p.m., with Pissi Myles.