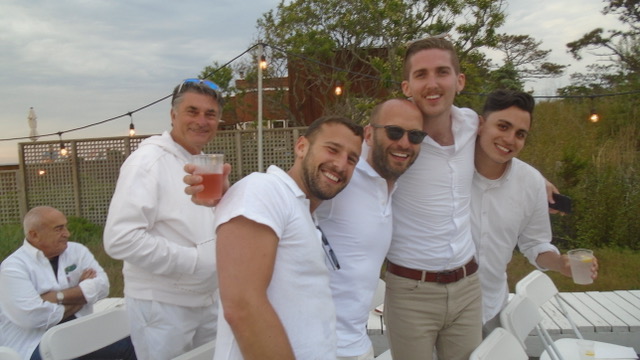 CONGRATULATIONS TO LINDA Gottlieb who spearheaded the 8th Annual Women’s Pride in the Pines event on June 9. The two-part event began at 2 p.m. at Whyte Hall, with drinks, dancing, and a wonderful auction with lots of great choices to win. In keeping with the tradition of this gathering, everyone was dressed in white. 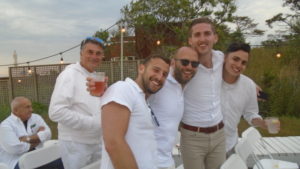 Boys in white at Women’s Pride in the Pines

Later the party moved to the Pines Club on the bay. The weather was perfect for an outdoor event. Cocktails were served on the bayside deck, with dinner to follow. The show featured a three-women act known as BETTY. Then the amazing Alan Cumming took the stage and sang many favorite songs that were familiar to all – music written by women – as this is a woman’s event after all … but this did not stop the boys from showing up! Songwriter Elizabeth Gilbert spoke to the audience, which included many familiar people from the Pines, Cherry Grove, and the mainland who came to attend this fabulous party.

The LGBTQ Focus Foundation organized the event with all proceeds going towards the Family Equality Council, an organization that began 35 years ago.

Rob Schutter, a frequent guest on “The Today Show” as well as Rosanna Scotto’s “Good Day New York,” has been seen in the Pines and the Grove. Happy Birthday Ward Auerbach and Herve Seniquer. Hal Hayes did a quick trip to Manhattan on Sunday, and returned on Monday to see the Alvin Ailey dance group.

Jody and David Mahler with Karen and Walter Boss are the social couples of the Pines spending Gay Pride Saturday night in the Grove. They enjoyed dinner and watching the fantastic fireworks display bayside. The famed real estate team in the Pines, brother and sister Kris and Karen Grae, along with their friends Ned Lovric and Bruce Halperin also enjoyed the Gay Pride Grove festivities. Tom Cunningham spent his birthday with Zach Hudson at the pool show and also attended Gay Pride Day in the Grove.

BOFFO had a film screening of “Unstoppable Feat: The Dances of Ed Mock.” Mock was a dancer and choreographer in the ’60s, ’70s and ’80s who lived in San Francisco. Filmmaker and BOFFO Artist Resident in the Pines is Brontez Purnell, who produced the documentary.

A benefit for The Fire Island Pines Historical Society was produced by Bobby Bonnano, and curated by Bob Howard and Scott Bromley. It was held at Whyte Hall on Sunday afternoon, June 10. At least 100 people attended this special showing of aerial photos of the Pines from the 1970s to present, images that were donated by Claudio Conte. His late husband Jerry Glorr commissioned Claudio to begin this project more than 20 years ago. An original map of the Pines houses was shown, which was a reference tool for early Pines real estate brokers Arden Catlin and Doris Taussig to use when selling houses.

Just in, we are sorry to announce the recent death of Jack Lichtenstein. We all knew his wife Rita’s passing in March devastated Jack – may they now rest together. More memories about Jack next issue.

June 29: Shabbat in the Pines brought to you by Congregation B’nai Olam, will meet monthly. First scheduled service Friday, at 8 p.m. The location is TBA, look for flyers in town, or RSVP to 917-692- 2041 via text or voice message.

July 4: The annual Grove Invasion of the Pines. Get ready for the excitement and all the festivities.

• Sip-N-Twirl has started to host a movie night every Tuesday at 9 p.m. Last week the Disney/Pixar Academy Award winner “Coco” was shown. Upcoming film titles to be announced.

• John Putnam has returned to The Blue Whale Marina Club for another season, with his group Used Blues, every Sunday, from 12:15-3:15 p.m. Late night with open mic at the Piano Bar featuring pianist Jack Aaronson, also at the Blue Whale every Friday, Saturday, and Sunday, from 10 p.m.-2 a.m.

• Fire Island Pines Fire Department will bring back bingo at the firehouse every Thursday through the season, beginning July 5, at 7 p.m.