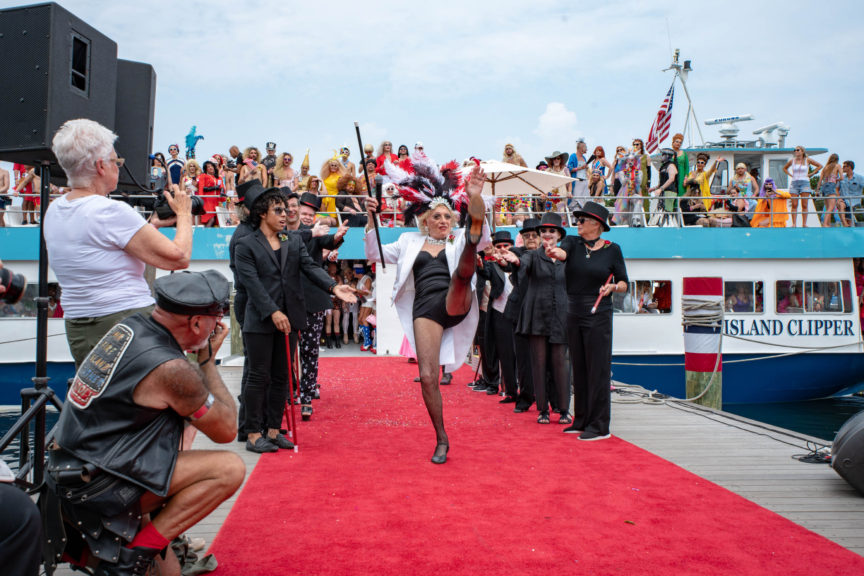 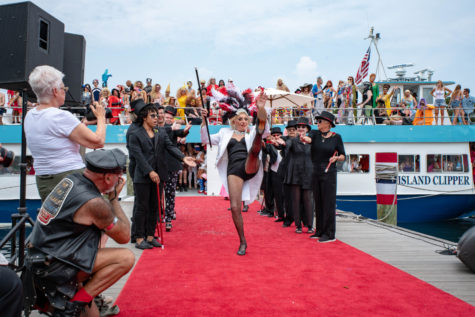 Rose and her entourage at the Invasion. (Photo by Robert Sherman)

We boarded the ferry and left the Grove. We cruised along the Great South Bay, arriving in Pines Harbor. Our ferry was packed with our bevy of 300 beauties. As we approached the entrance of the harbor, we were greeted with horns and whistles blowing, flags and hands waving. It was incredible. We slowly approached the same dock where Panzi and I first embarked so many years ago.

Robin Byrd who was filming the event, Pines President of FIPPOA Jay Paganno, Ariodne Villarreal, Randy Wilson, Jim Vandernoth, Ed Schulhafer, and Crayton Robey were among so many others standing shoulder to shoulder. Broadway choreographer and director Jerry Mitchell was there, cheering like so many others. People were standing on the Pavilion balconies and the decks with hundreds of people lined up along the harbor walks. Panzi looked fantastic in her cotton candy pink ruffle coat. She was the first to exit the boat. She welcomed all and then introduced the 2018 Homecoming Queen Rose Levine. Sixteen handsome men and women walked off the boat and lined up wearing their top hats, tuxedos and red canes. Rose walked through the arch of canes and the crowd roared. The speakers had “I Could Have Danced All Night” as her entrance song. She then sang a chorus of Jerry Herman’s “The Best of Times is Now” while everyone joined in. For me it was the experience of a lifetime.

My partner, Michael Fitzgerald, in his kilt, was right by my side. We then went to Sip-N-Twirl, the Pool Party at the Hotel, and then we bounced around town greeting everyone, until we boarded the ferry back to the Grove. We docked back at the Grove to another crowd-pleasing entrance. At the Ice Palace, it has been a tradition for many years that the Homecoming Queen is greeted by Ariel Sinclair, who introduces her to all the people in and around the adjoining pool.

After a full day of excitement we finally arrived home. Only in the Grove and the Pines can we have such a full day of fantasy. Nowhere in this world could we have experienced this – a day of the Rose.

Lila Swell hosted a delicious brunch that we attended along with Bo Fridsberg, Bobby Michel, with his houseguests Brian Banke and Michael Edwards. Brian Ridley and Ignacio Serrano who owned “Summer Solstice” for l5 years – now retired – were able to join us for brunch. The famous Green Twins of the Pines were also guests. Richard Green who lives in Long Beach, California, spent two weeks in the Pines with his brother Clark. They lived in the same house in the Pines, since l963. They finally bought it in 2014. I dubbed Lila’s brunch “The West Side Group” since all the guests live west of the Harbor.

Returning to the Pines for a few weeks were the Steluka family. Christine, who grew up here with her parents Kay and Charles Corso, met architect Gary in the Pines and they wed. They have two daughters and now are the proud grandparents of four. The entire family, sons-in-law included, were enjoying the Pines. Kay Corso will soon be 98 years old. She is now living at The Arbors, in Islandia, a Long Island village not too far from us.

Peter Thambounaus and his partner Demetrious Sengos had a top-notch glorious dinner party at their home.

Ricardo Mulero will have his annual art show of oil paintings, on Aug. 11, at 250 Bay Walk.

The 10th Annual Fire Island Pines Fire Department BBQ was held at the Firehouse. As usual it was a tremendous success, but this year they had an even larger crowd than last. Our firefighters doubled as chefs, cooks, bartenders, servers and of course gracious hosts. Welcome and congratulations to new FIP Fire Chief Joe Giman.

Real estate mogul of the Pines Chris Grae held his annual luncheon around his oceanfront pool. The party was extended because the crowd was having such a great time. DJ Vito Fun made the party more fun. Chris was the grill master serving hot dogs, drinks and watermelon. The many guests included his sister Karen Grae who also sells real estate, Paul Albertson, Martin Hicks, Gil Neary, Anthony Taccitta, John Stevens, Kenny and Jeanne Lesser.

Mitch Cirka, Randy Smith, Jorge Gallegos and Tommy Nichols hosted their annual luncheon/pool party. Among the guests was Broadway performer Adam Shapiro who is currently the understudy in the Yiddish production of “Fiddler On the Roof” in New York City.

Ellen Feldman Putnam spent a few days vacationing in Columbia, and Annapolis, Maryland, with her old school mate Barbara Bice, who showed her champion Brittany Spaniel Micka at the National Capital Kennel Club in Annapolis. She came back to the Pines and didn’t miss a beat. She and John walk to the Grove weekly; they love to have breakfast there.

July 21: “Cherry Grove Stories,” a film produced by Mike Fisher, will be shown at Whyte Hall, at 8:30 p.m. Admission: $20. It premiered in the Grove last season, hope to see you there.

July 21: Lambda Legal will have its annual luncheon/ fundraiser at Beach Hill Walk.

Aug. 4: Pines Conservation Society will have its Go Native Plant Tour, from 10 a.m.-1 p.m. Tickets: $25; only 75 will be sold. For details, www.pinesconservationsociety.org.