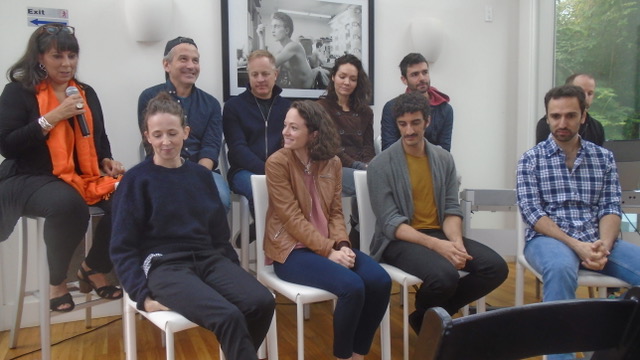 It’s always a thrill when you arrive in the Pines, seeing the natural harbor surrounded by boats and yachts, beautiful houses – and the people you see aren’t bad either! The party circuit has begun with a major opening party of the season hosted by Gil Neary and Scott Riedel to celebrate Gil’s 62nd birthday, which was at a late night fiesta, Fire Island Pines style. Robin Byrd did her flagging, and Todd Ford was the DJ spinning all the dance favorites. Drinks and food was plentiful. The bartenders were John Quinn and Charlie Walden.

Then there was the Kentucky Derby Party. Many arrived in their most glamorous hats or fascinators. Geoff Capes won $200 for best hat – a replica of Churchill Downs on his head. Another favorite was the Mai family all festively crowned for the occasion. They were the weekend guests of David’s brother, Christopher, and his partner, Mathew Markoff, who recently bought a house in the Pines.

As mentioned in my Grove column I was in London. While there I met Nathan Urquhart at the theatre, and then recently met him again with his partner, Ira Rogers, and their friend, Oliver Chen, in the Pines. Michael and I also spent a weekend in Hudson, where we met former Pines residents Jim Guedry, Alan Clack, and Philip Broomhall. Mark Berman, the president of B’Nai Olam Congregation of the Pines, had a wonderful Chanukah party in New York where many people from the Pines were in attendance including Rabbi Harra.

Daniel McDonald who lived in the Pines for many years is now living in Orlando with husband Trent. He was the leading man in many FIPAP shows in the Pines. He works in a Hotel at Universal Studio. He misses us, and hopes to visit this summer.

On Columbus Day weekend 2018, Andrew Kirtzman hosted the 10th Annual Theatre and Literary Weekend at The Madison, which featured many members from the 2018 Broadway Tony Award winning show “The Band’s Visit,” including the show’s star, Katrina Lenk, and Director/Actor David Cromer. Christine Pedi was the MC, as she has been for the past six years. I attended the opening night performance at the Paper Mill Playhouse in Milburn, New Jersey, of “My Very Own British Invasion,” directed and choreographed by Tony Award winner Jerry Mitchell, a Pines resident. It features the music of Herman’s Hermits, with vocals by Peter Noone, who was celebrated at the opening.

Have you seen the Ozempic ad on TV? Pines resident Billy Carol is featured.

Senator Kirsten Gillibrand, who has been a guest in the Pines for the past seven years, is, as you know, now running for U.S. President. I have met with her every year she has campaigned in the Pines. She was the guest on “The View” a few weeks ago. I greeted her at the stage door.

Obituaries:
• Arnie Guior, a longtime resident of the Pines, died suddenly in January. He and his partner, Atilano Gimenes, were celebrating their 47th year. A beautiful couple inside and out, they attended all the fundraisers, major dinners, parties and shows, always together.
• Jan Black, the father of Steven Alan Black, loved to attend the Labor Day show each year.
• Dr. Dick Johnston, a guest in the Pines for many years, leaves his beloved partner of more than 40 years, Kostos.
• Lesley Mandel lived in the Pines and worked as a realtor for 22 years before moving to Palm Springs.
• Joan Freda and her late husband, Bob, lived at the Carrington Estate for many years while Bob was a ranger with the National Park Service.
• Gloria De Mann lived on the bay at “Reflections.” She hosted many lavish fundraisers in the ‘70s. A barge would be moored to the bulkhead and used as a stage for entertainers like Joan Rivers, Peter Allen, and Melissa Manchester.
• Mary “Bunny” Diehl moved to East Hampton in 2005 after the death of her partner, Laura Delano Eastman. Laura was a founder of FIPAP with Sylvan Cole and David Baker.

Upcoming Events:
• SAGE will have their 27th Annual Fire Island Pines Celebration, on Saturday, June 1, honoring Nick Politis, Richard Desjardins, and PJ McAteer. Once again this wonderful event will be held at Dr. Ed Schulhafer’s home at 225 Bay Walk. Tickets at www.sageusa.org.
• Linda Gottlieb will again host Women’s Pride in the Pines, on June 8. A fantastic event with an auction, it will be a busy and exciting day and evening with the three D’s (dancing, dining, and drinks.) Entertainment will include singer Joi Cardwell and comic Judy Gold. For ticket information, call 212-755-9678 or email lgottlieb@lgbtqfocus.org.