Pines Party 2016: Xanadu was a smash in the Pines. It was held on the beach at Cedar and Atlantic. The costumes, the lighting, and the atmosphere were brilliant. Susan Marabito once again proved that her old school Pavilion job as DJ was uncontrollably superb. Her last two songs “Life’s A Beach” and “Xanadu” were flawless. Private tents that were set up as an extra attraction had many of the Pines residents as hosts. Supernova, The morning party at the Pavilion began at 6:30 a.m. with Peter Napoli as DJ. The Pleasuredome After Party at the home of Jim Pepper was fantastic, with music by Occupy the Disco. Hundreds of hot boys attended the pool party on a hot afternoon. They cooled off by dipping in the pool and drinking exotic fruit drinks.

Congratulations to co–chairs Allan Baum and Ed Schulhafer. Thanks to all who contributed their time to make this a phenomenal event: Michael Cluer, Marc Cote, Doreen Fuentes, John Gaines, Jon Gilbert, Linda Gottlieb, Jeff Hall, Jay Henry, Hal Hayes, Frank Liberto, Roberto Montenegro, Vinnie Petrarca, Nathan Pinsley, Guy Smith, Damian Todaro, Erin Stacey Visslailli, Randy Wilson, and John Wood. Thanks to all those who volunteered to set up and break down the fabulous beach set. There was an influx of many new and young first time visitors to the Pines. I spoke to many of them who came from places like Ohio, upstate New York, Pennsylvania, Washington D.C., and even from the Bronx. It was a great weekend.

Brunching at the Blue Whale was very exciting, overlooking the Harbor and seeing the beautiful yachts and crowds go by. I felt as though I was on a vacation on one of the Caribbean islands. To add more charm was the music in the background performed by John Putnam and his Used Blues Group. In addition to John, who plays the guitar, there is Bernie on the bass guitar, and Tex on the flute and saxophone. 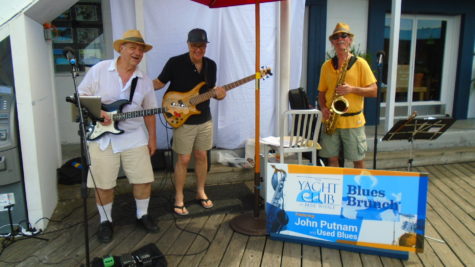 Michael Fitzgerald, Jay Robinson and I lunched there with Ellen Feldman Putnam. The outdoor restaurant was fully packed with many Pines residents as well as vacationers. Brad Price and Stuart Esack of the “Price Waterhouse” yacht were at the next table. You know their dingy is called “Half-Price.” Pines realtor Vinnie Petrarca and his partner John Krawchuk were dining with friends. John just began a new job as director with the Historic House Trust of New York City, which includes Gracie Mansion, Little Red Light House, The Edgar Allen Poe Cottage in the Bronx, and many others. In his previous position he was responsible for restoring the Carousel in Coney Island.

My spies tell me that Dr. Ruth Westheimer was in the Pines last weekend. Why not? She knows what’s going on! Another surprise visitor was Peter Theal who spoke at the Republican convention. No Trump in sight!

Cherry Grove royalty Jan Felshin and Edrie Ferdun lunched in the Pines at Lila Swell’s beautiful new home. Other guests from the Grove were Rolande, along with Lila’s house guest Marcia Lipsitz from New York and Greenport.

Michael De Falco and Bill Matthews entertained 28 De Falco members at a family reunion at their beachfront mansion. They were hanging from the rafters. Michael Borusso, a houseguest of Michael and Bill, had a mud mask party around their pool for at least 12 people. Michael McGinley, Jeffrey Bateman, Gary Guarino, and Grove resident Gloria Ben Hazi, with her guest Rika, along with Lila, were part of this fun afternoon. Michael and I were also invited but we could not make it.

The Co-Ops in the Pines had a scare last week, when a transformer caught on fire. It was under control very quickly thanks to the FIPFD. There was no damage. James, Connor, Ellen Putnam, Jim Pepper, Ralph, Lennie Vanilla, and Bob Howard were all at the scene immediately to help the firefighters, serving them water and helping.

Kent Dillon the mobility cart driver is in town to help you with a smile and a kiss driving the Margie Cart. Remember Margie Guardiola? She died about seven years ago. Her son graciously donated money for the Margie Cart; as a result she is still riding all over the Pines.

Finally I close with a mention of the sublime performances at the Fire Island Dance Festival. What can I say? It was beautifully executed, there were some touching moments, and the bayside backdrop at the home of Albert Lepage is always spectacular. I met four charming women this year at the performances: Blair Burke and Maria Burke, both from Robbins Rest; Tara McBride from Lonelyville; and Tara Schoen Fishman from Ocean Beach. This is not just a Fire Island Pines event but also a true Fire Island event.

Lucy Arnaz will be appearing at Whyte Hall on Saturday, July 28, at 8 p.m. You know she is the daughter of Lucy and Desi. I have seen her perform in New York and she is just wonderful.

The legendary John Waters appears at Whyte the following week, Aug. 6, also at 8 p.m. This show is brought to the Pines by none other than Daniel Nardicio. Tickets are available at Dworld.com.

So much for honesty in reporting.