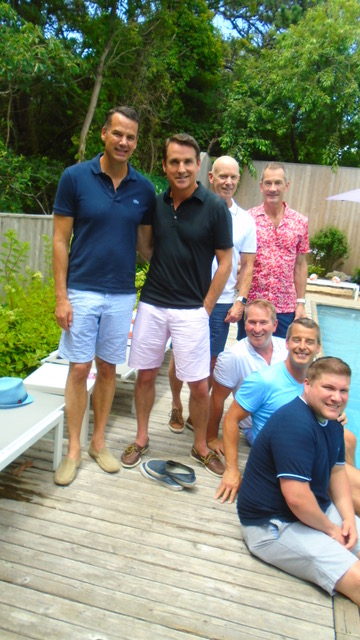 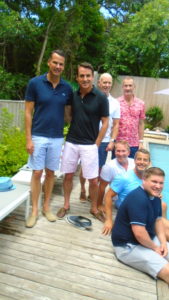 Invasion 42: Michael Fitzgerald and I were ushered to a reserved seat on the dock where we had a perfect view and watched the entire development of the pre-show and everything happening around us before, during, and after the Invasion. It was as though we were sitting backstage in the theatre as we watched the crowds arrive and all those who were involved in organizing the event.

The dock was elegantly dressed with a red carpet. Ariadne Villarreal, Randy Wilson, Ed Schulhafer, and Jim Vandernoth greeted those who were performing and handed water to all of us periodically; Robin Byrd was already doing her flagging; and Crayton Robey was getting ready to start filming. Jay Pagano arrived and greeted everyone with an inspiring speech.

As the time passed more people gathered. By 1 p.m. there had to be 2,000 people in the harbor shoulder to shoulder on the ground, and another thousand people hanging from the Pavilion or on their boats.
The pre-show began. Ariadne introduced a fantastic group called Birds of a Feather, featuring performers dressed as peacocks, owls, chickens, parrots, flamingos and an ostrich. The birds were: Todd Sears, Chris Garvin, Matthew Ryan, Matthew Monzon, Chris Collins, Christian Dameron, Jonathan Sare, Geoff Capes, Michael Greenberg, Michael Jacoby, and John Vietri.
Rose Levine sang “It’s Today,” Luis Villabon and his group did two songs from a new off Broadway show, Nicole Lafountaine sang her classic version of “The Star-Spangled Banner” and then the boat arrived with a bevy of beauties from the Grove.
We all got the message as Panzi and her group of Mexican peasant women disembarked. The parade began and Panzi kept it at a fast pace. Some very beautiful and elaborate costumes were worn. China had her royal moment, along with Rita George who was Miss Fire Island in 1969. I have been at every Invasion since 1976 and I thought this was one of the best.
Fire Island Pines Fire Department had its 9th Annual Barbecue cookout at the firehouse the following Saturday, July 8. Many of the volunteer firefighters doubled as chefs and others served up the hamburgers, hot dogs, salads, chips, and beer. The raffle prizes were fantastic. Kent Dillon, Pierre and Dimeti were the $500 winners.
God’s Love We Deliver had its annual Fire Island fundraiser at Jeff Pfeifle’s oceanfront home. Executive members of GLWD including Karen Pearl, Stephen Covello and David Ludwigson were hosts along with Jeff.
Bobby Bonanno, the president of Fire Island Historical Preservation Society hosted an event at The Blue Whale, “Souvenier Events 70s.” Robbie Leslie and Warren Guck, both famous Pines DJs from the 70s were on a panel of six people, which also included Steven Oliver, Mike Borowski, Max Rodriquez and Victor Fun. They spoke of the beginning of the disco era in the Pines, which went worldwide. Some of the above named are still working in the Pines at present. Famed photographer Koitz was on hand snapping away. This event was also broadcast live on Serious XM. In addition, Scott Bromley, vice president of FIHPS, was present.
Independence was held at “Reflections” on Bay Walk. Jay Ward, Robert Montenegro, and Guy Smith coordinated this fantastic party. At least 500 people attended. LGBTQ and the Pines Care Center were the recipients of the proceeds. They are also working on the Labyrinth Pines Party to be held on July 22, a benefit for The Pines Foundation, a non profit for FIPPOA Charities and Stonewall. Tickets at pinesharbor.com or at the Pines Harbor table.
Lambda has fought (and still fights) for the rights of the LGBTQ population for 44 years. They held their 39th annual fundraiser last Saturday in the Pines. I remember when Lambda began and they had dinner parties at Jim Pepper’s house – I was even seated with David Geffen once. As the years went on they held luncheons at Dan Cochra’s and Don Sutphin’s house. For the past six years it has been a luncheon/pool party at 548 Beachcomber Walk. Todd Sears has been active with the group on Fire Island for the last 15 years. Other hosts for the afternoon included Brian Holland, Rick Bingham, Johnny Stearn, Bill Kapfer, Edde Adwell, Keith Headley, Chris Garvin and Omar Gonzalez-Pagan. It was very well attended, over 350 guests, with the food catered by Billy Carroll. Kevin Cathcart, served as Lambda’s director for 24 years. The new director is Adrian Ogle. “We are your lawyers and we are here to defend you,” was the powerful closing message.
Welcome new homeowners Todd Sears, Chris Garvin and Matthew Ryan.
The Seventh Annual Women’s Pride in the Pines will be held on July 29. Congratulations to the organization’s President, Linda Gottlieb, who has taken this group to the next level. The dance party, at Whyte Hall from 2-6 p.m., features a VIP cocktail party, buffet dinner and show featuring Tony Award winner and singer Billy Porter, with Comedian Jim David. For tickets: lgbtqfocus.org/tickets or call 212-755-9678. The dress code is white.
0 0 vote
Article Rating