THE FREE UNION CHURCH located at Ocean Breeze Walk and Midway in Ocean Beach will be celebrating its 100th anniversary with a re-dedication ceremony on Sunday, August 28, 2016.

The majority of the book will cover the history of the church itself and will include additional photos. Subjects covered will include the establishment of the church, facsimiles of important church documents, a list of all 42 past and present trustees, the charitable giving of the church over the years, AA involvement, gifts to the church, and last, but not least, color photos of the church’s stained glass windows.

The history of the Free Union Church goes all the way back to the founding of Ocean Beach. In 1908 a real estate speculator by the name of John A. Wilbur purchased a tract of land that now encompasses Ocean Beach. He subdivided the land into 25×100-foot lots, and offered them for sale for $100 apiece in various Brooklyn newspapers.

During the early years of Ocean Beach, religious services were held in the home of S. Nelson Irwin, MD and his wife. Wilbur, the speculator, was often present at these services. At one such service, Wilbur assured Irwin, his wife and sister-in-law, one Miss M. Louise Harper, that he would set aside a parcel of land for a church in Ocean Beach.

Like a dog with a bone, Harper would not let Wilbur forget his promise. Finally, after listening to Harper’s constant reminders, Wilbur asked her to provide a document listing the names of those willing to pledge financial support for the church and the amounts they would guarantee. On Nov. 15, 1915, Harper did so, showing a total commitment of $642.43 from eight signatories – including some monies that had already been deposited in the bank. Wilbur then deeded the lots on which the church was eventually built to the church organization.

Most of the trustees lived in New York City at the time, but they journeyed to Ocean Beach in the winter of 1916 and on Feb. 25 of that year they legally established the church with the state – hence this year’s centennial celebration. Still, it took over a year before ground was broken and in the autumn of 1917 the cornerstone was laid. The architect was Frederick L. Wagner and the builder Anton Severin.

For her efforts Harper was designated as the church founder, and presented with a suitably inscribed pin. Work proceeded until the Free Union Church was completed and dedicated on Sunday, Aug. 25, 1918. In the fall of 1920 a special service was held to celebrate paying off the mortgage once held by the South Side Bank of Bay Shore. It was quite appropriate that the burning paper was held between the delicate fingers of none other than Miss M. Louise Harper.

The Free Union Church is the oldest church on Fire Island. It is built of wood with high ceilings and fitted with beautiful stained glass windows donated by its parishioners. For decades the church had been called the Union Free Church, but in 1998 workers discovered the original cornerstone revealing that the church’s actual name was the Free Union Church. The trustees subsequently voted to restore the original name.

Interdenominational services are held from 10:45-11:30 a.m. each Sunday from Father’s Day through Labor Day. Ministers of various denominations come to the island each week to preach to an average of 35 worshippers. Many ministers are provided by the True North Community Church of Bohemia. The church also houses meetings of the local AA chapter. Its main source of income is the annual Raffle and Cake Sale. Its board of trustees meets three times a year. 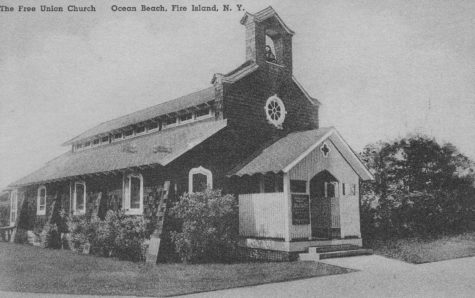 This church and many homes were built by my great grandfather Anton.. He is also survived by my mother Judy Smith who shared this with me. Our family has a large number of photos dating back to early 1900s of island