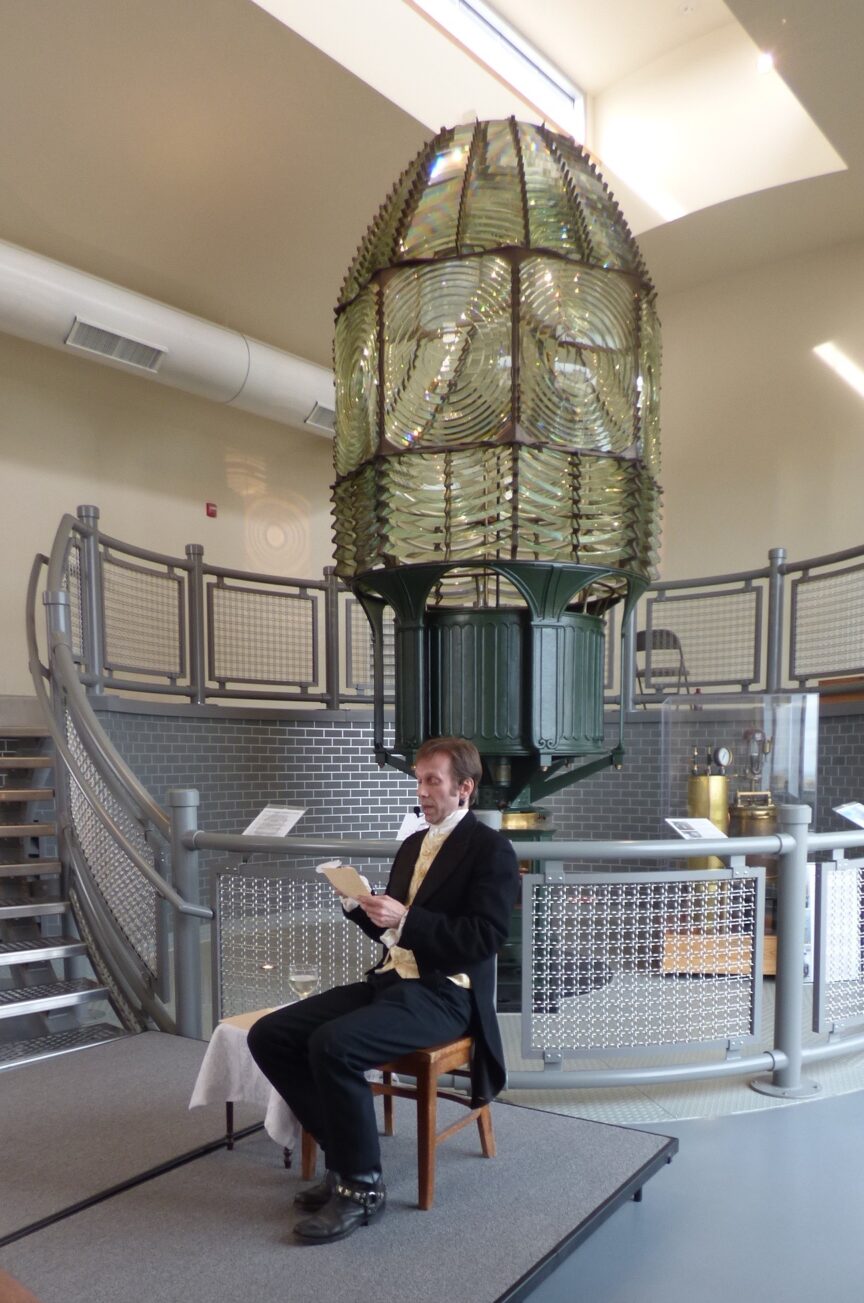 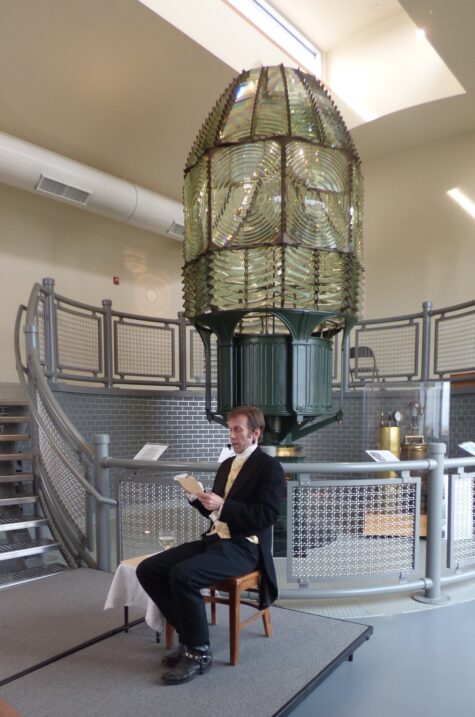 Historical actor Joseph Smith in character as Augustin-Jean Fresnel at a performance at the Fire Island Lighthouse Lend Building in 2017. (Photo by Shoshanna McCollum)

Long Island is home to some 20 odd lighthouses. Montauk Point Light was the first built, but Fire Island Light is the tallest at 168 feet (with 182 steps – but who’s counting) and is 50 feet higher than her sister out at Montauk. In addition to Fire Island’s lighthouse itself with its stunning 360-degree views from the gallery platform at its top, the compound also boasts a museum and gift shop in the converted Lighthouse Keepers quarters. Not to be overlooked is the Fresnel lens housed in a spectacular building built specifically for its display.

The Fresnel lens was the “soul of the lighthouse,” a 16-foot high, pineapple-shaped lens that focused the light rays from the lantern room atop the tower, through heavy glass panels called storm panes, out to sea.

Often called “the invention that saved a million ships,” this marvel of a lens is an invention of the French physicist Augustin-Jean Fresnel (1788-1827).

Fresnel was fascinated by light and spent his short life developing theories on its propagation. His research in optics, specifically the wave theory of light, overshadowed even Isaac Newton. But it is the Fresnel lens for which he is mostly remembered.

There was a need for some sort of lens to concentrate the rays of light into a single beam that could be seen at great distances by ships navigating off shore. In 1819, the French Commission of Lighthouses asked scientists for possible improvements in lighthouse illumination. Several scientists tinkered with the idea, but it was Fresnel’s design of a thin, lightweight lens in the form of a multi-part unit mounted in a frame that changed history. His idea was an array of prisms, arranged in a circle, each ground to a different angle. This collected disparate rays and focused them into a single beam. Additionally, his design of multiple lenses with large apertures and short focal lengths enabled its construction using much less material than previous designs.

His first prototype, which he called “lenses by steps,” so impressed the commission that he was assigned to produce a full-scale version. A year later, in 1821, an official test of his newest light was witnessed by Louis XVIII and his entourage from 32 kilometers away, and was so impressive that the following summer the world’s first lighthouse equipped with a Fresnel lens was lit.

Fresnel continued his lighthouse work despite the fragility of his health (he had started coughing up blood). He resigned from numerous projects on which he had been working to concentrate on lenses for lighthouses which, at this point, he considered his most important work. Fresnel designed six sizes of lenses divided into four orders determined by size and focal length. The largest were called first-order lenses. He also laid out a map for 51 lighthouses, and lesser lights, using lenses of varying sizes depending on their application. Augustin-Jean Fresnel died of tuberculosis on Bastille Day at age 39.

Fresnel remains one of the geniuses associated with the likes of Isaac Newton, Christiaan Huygnes, and Blaise Pascal. His name is one of 72 engraved on the base of the Eiffel Tower. Several features on the moon have also been named after him. One of his contemporaries, Humphrey Lloyd, provost of Trinity College, Dublin, described his work as “the noblest fabric which has ever adorned the domain of physical science, Newton’s system of the universe alone excepted.” Fresnel was granted the Royal Society’s Rumford Medal on his deathbed.

The current Fire Island Lighthouse was outfitted with a state-of-the-art revolving first-order Fresnel lens upon its completion in 1858, and it remained in operation until the U.S Coast Guard placed on extended loan it to Philadelphia’s Franklin Institute in 1933. For 75 years it was the first light sighted by millions of immigrants reaching America’s shores.

Aug. 7 is National Lighthouse Day, an opportune occasion to come see Fire Island’s own famous lighthouse. After a long closure due to the coronavirus it is again open to the public. Don’t forget to visit the Fresnel lens during your visit. We are on the cusp of celebrating its first decade anniversary of its rightful return back home on display at Fire Island Lighthouse grounds in 2011… A story to be continued!