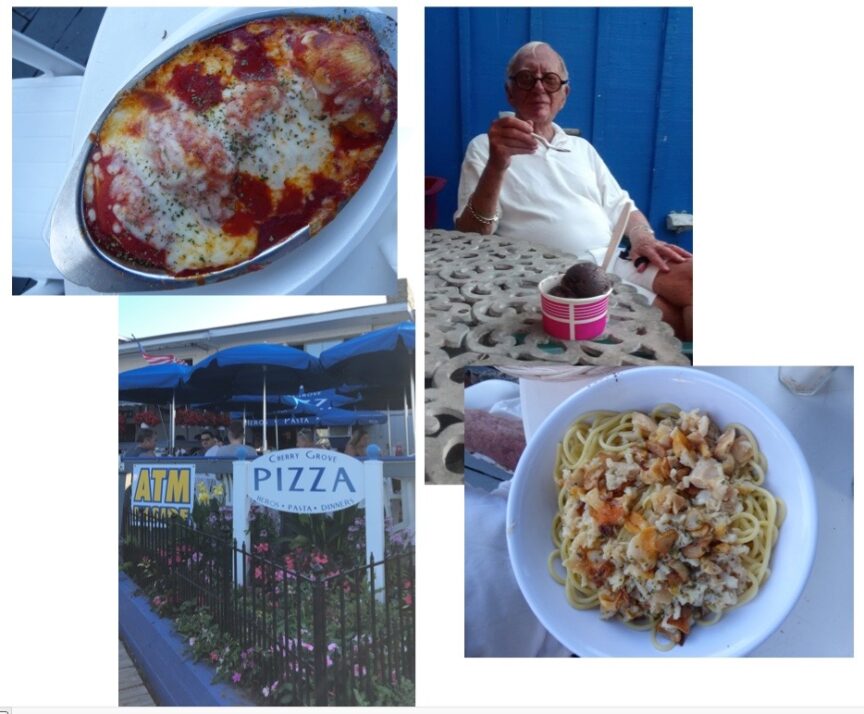 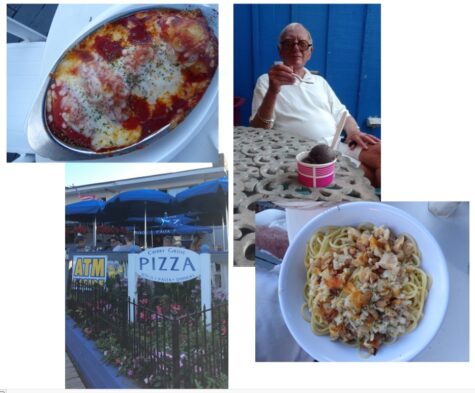 Ordinarily when visiting Cherry Grove, I reach for one of my better summer dresses, but the heat wave had lingered for days, and every frock in my closet just looked too damn heavy. So I opted for my caftan, topped off with my straw beach hat trimmed in blue, and a matching mask. I looked every bit the vacationing Fire Island matron.

“Whatcha covering in the Grove?” the captain asked me with a big smile as I stepped on the water taxi when he noticed my press pass.

So I told him and his deckhand all about Get Baked Tuesdays at Cherry Grove Pizza.

The baked entrée comes with a dinner salad, complimentary wine or beer and ice cream afterwards, all for one flat price.

“A deal like that on Fire Island?” the deckhand asked.

Indeed. I had been hearing about this special for years, and it was time to try it for myself. Upon disembarking from their boat however, I had one important stop to make – picking up my dates – Cherry Grove/Fire Island Pines Columnist Robert Levine, his partner Michael Fitzgerald, and their roommate helper, Jay Robinson.

It was Bob’s idea to make a night of this, and I was glad he did. I hadn’t seen any of them in person since the COVID lockdown, or set foot in Cherry Grove for that matter. Not being in the Grove since the prior summer, I was impressed by the orderliness of things. The residents take the mask wearing seriously here, no signs or police needed. Folks just did it, and many wore face shields as well.

Most of the people at the pizzeria appeared to be regular patrons ordering meals to go or taking advantage of the spacious deck of white tables, which was the perfect spot for people watching in the heart of Cherry Grove’s downtown.

Our masked waitress was pleasant and efficient. Jay ordered the stuffed shells, Michael chicken Parmesan, and I went for eggplant rollatini. If baked dishes are not your thing, no problem, there were plenty of other choices on the menu, and Bob selected the pasta with white clam sauce. All dinner entrees were reasonably priced.

We sipped our drinks and enjoyed our salads, which arrived promptly. The temperature mercifully dropped just a few degrees in the early evening. Conversation drifted to Cherry Grove Pizza’s proprietor, Frank Pezzuto, who unfortunately was not there that night so I did not have the pleasure of meeting him. Pezzuto donates pizza and catering to a robust itinerary of events on Cherry Grove’s social calendar on any given summer, and is well respected in the community. He also operates Sayville Pizza on Main Street in downtown Sayville, which has been there for decades.

The food followed, fresh out of the oven. When they say baked dish, the description was accurate. Every entrée had been individually prepared to order, and arrived still in its own roasting tray.

This is not an age where we can sample morsels from our dinner companion’s plate, so I can only speak for my eggplant rollatini. My husband and I scour South Shore Long Island on our quest for the perfect eggplant rollatini. This one gets high marks because there was no hint of eggplant skin on it, and it was not in the least bit oily, something this delicacy is predisposed to when prepared by a novice chef. Jay and Michael’s dishes were made with the same robust marinara sauce, and they both seemed quite pleased, and Bob remarked how well the white clam sauce paired with the white wine they served him.

“You know all these years, I did not know they did this Tuesday special,” remarked Michael.

Because the servings were so generous we all had leftovers to take home, but before leaving the waitress put a handful of day-glow colored plastic “gems” in my hand. These were our vouchers for the complimentary ice cream at Sweet Licks next door.

“Nothing too fancy,” was the instruction Bob gave me in selecting a flavor, but I’m a kid at heart, and the dark chocolate raspberry truffle was calling my name. Bob scrutinized the cup and sampled it with his spoon.

For a little while we chatted about life until it was time for my 8:40 p.m. water taxi ride home, and we headed for the dock.

“You know, Ariel Sinclair takes the 8:40 water taxi to Ocean Beach on Tuesdays to do bingo at the Island Mermaid,” Bob mentioned.

Ariel did arrive, with an entourage – all dressed in caftans! Of course Bob, ever the columnist, reached for his camera to take a photo, but before doing so glanced at my outfit. “Get in the picture Shoshanna, you fit right in.”

Fine food and friends on Fire Island – life is good!