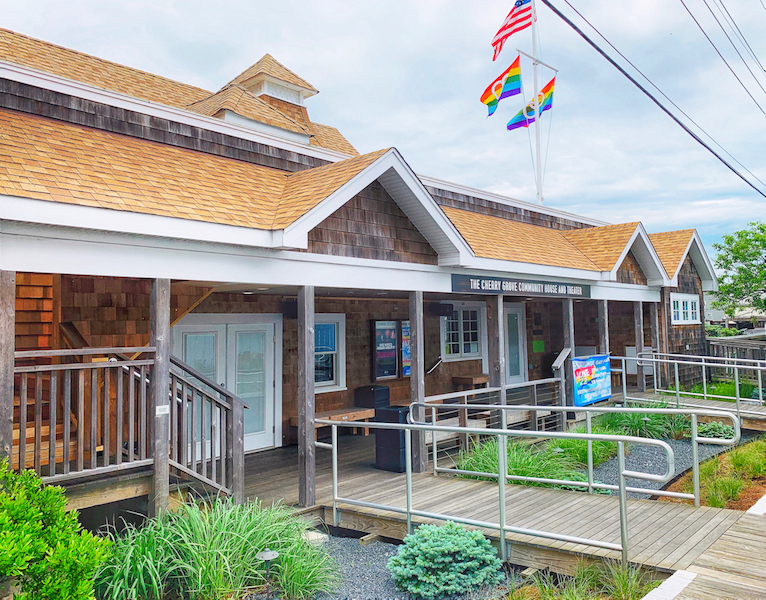 In 2013, Cherry Grove Community House and Theater was listed on the National Register of Historic Places, but its history began much earlier than that. On a recent Tuesday I was lucky enough to tour the Theatre with two notable Cherry Grove residents, Thom Hansen, president, Arts Project Cherry Grove; and Robert Levine, a writer with this publication and one of the longest members of the Arts Project and the longest running performer at this historic place.

At a time when there was no electric, no water and no phones on the island, it became the “center of civilization,” said Hansen. “It was where people gathered and got together for their meetings, and then of course they started putting on shows as fundraisers. So it not only became a gathering place it became an entertainment place.”

“There was no other place in Cherry Grove to go to a show,” Levine said. “So this was the place. We used to have three shows a night, sold out, and three shows a season that were all by the Arts Project, and now there is so much competition that it’s harder to fill a house for three performances.”

Hansen and Levine went on to say that at one point they did six performances on Labor Day and Fourth of July weekends, and they would almost all sell out. “Those days are gone,” Hansen said. “Times are changing a little bit. Now what we have are single shows with one or two performances and sell them out, so we are still very successful, it’s just a different world than it was.”

The historic register status came through because of the Arts Project, Hansen explained. While the building is part of it through the Cherry Grove Property Owners Association and the CGCAI, it was the Arts Project that brought all the theater here and brought the people together. “That is how we got the designation as the oldest LGBTQ continuous Theater in the United States,” Hansen said. “They probably did it in the sand in 1946 and 1947, but in 1948 the building was here.”

Many famous people have graced this stage, and Levine remembers many of them. “Martha Raye, Arlene Francis, Hermoine Gingold … Earl Blackwell (who founded the Arts Project with Mrs. Helen Ely),” he said. “At a time when there were a lot of men in the town, having a woman on the board, a ‘Mrs.,’ gave the community a different cache … she was a very important person out here.”

It was a very different time for the LGBTQ community. “It was really a place where people came to be themselves, safely, not having to worry about people finding them out or firing them, although there were problems,” Hansen explained. “Their names were in the paper if there was a raid,” Levine said. “There were raids on the Meatrack, and men who had wonderful jobs were arrested and their names were in The New York Times and they were fired, and so on.”

Although known as a gay community, there were many families who were a part of Cherry Grove. They took part in everything, and were never separated in any way. There were residents who were attorneys who represented “the boys” for free if they were arrested, Hansen explained. And other community members who would post bail, Levine added. ‘The point being is that we are a community, a whole community, regardless of sexual orientation,” Hansen said. “Cherry Grove is a very united place for the most part, and always has been. That’s why this Theatre has lasted.”

Controversies, of course, existed over the years, as tastes changed, and some of the older people weren’t as open to change. One performer would have two sets of lyrics for his numbers. One he would perform in dress rehearsal for Mrs. Ely and the board, and one he used on stage. Hansen and Levine mentioned that what was considered unacceptable language at the time is now laughable, as today performers can say anything.

The Theater stage is the original one, with updated curtains, fly system and electric, but part of the paneling was kept during the more than $1 million renovation it underwent a few years ago. Amazingly, a bulk of the money was raised through community fundraisers. An addition was added, which includes a conference room and new restrooms, along with a rooftop deck where the annual fireworks show can be observed on June 22.

The proscenium was built by Howard Seeley, who incorporated memorabilia from the shows and from individuals to create it, such as a broach of Mrs. Ely’s. A framed drawing details the artists, items and shows that are included. A signed original rainbow flag by Gilbert Baker (1951-2017) also adorns the wall. On June 23, at 1 p.m., excerpts from “Rainbow Warrior,” Baker’s memoirs, will be read.

Every person who has performed at the Theater has signed the wall in the dressing rooms, and it’s a virtual who’s who of performers, including Debbie Reynolds, who was here in 2015; Thom “Panzi” Hansen; and Robert “Rose” Levine. Rose will perform her annual show on July 6 (see our calendar of events for more information).

As it was in the past, The Cherry Grove Community House and Theater is still very much the center of the community. In addition to the shows, Episcopal church services are held here; an opera discussion group, Al-Anon, bingo and Jazz-a-Size meet weekly; and the Fire Island Artist Residency has grown each year. It also is where many of the town’s fundraisers are held. While touring the Theater and hearing some of the stories first-hand was a special treat, the feeling that resonated the most was what a safe haven Cherry Grove Community House and Theater was, and how, after all these years later, although times are different, it continues to be a place where everyone can be themselves.

Hansen summed it up beautifully, “It’s a joyous place.”

CORRECTION: The print version of this article published on June 21, 2019 included a misstatement that that Earl Blackwell was also known for his infamous “worst dress list” among Hollywood elite. The late great fashion critic was of course Richard Blackwell, no relation to Earl Blackwell mentioned in this article.