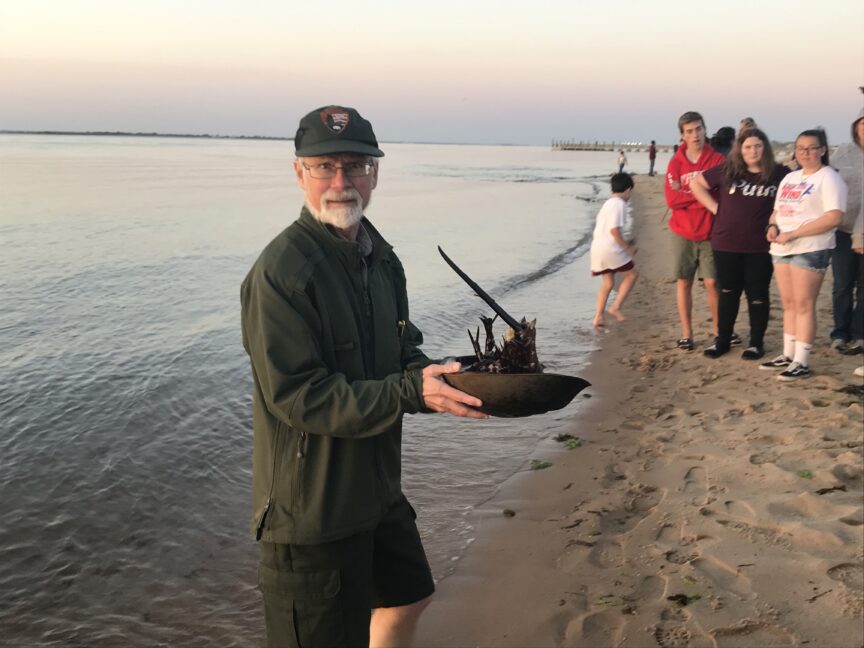 The crowd was greeted with a presentation on horseshoe crab anatomy, a multitude of National Park Service Junior Ranger books, and an art contest that welcomed all ages for entry. The talk of the night was the touch tanks, which contained sea creatures like crabs, muscles, clams, a jellyfish, and of course, two horseshoe crabs for attendees to interact with and learn about.

Fire Island Lighthouse Program Coordinator Amanda Vaskas thinks events like these are mutually beneficial to the lighthouse and those who visit; many Long Islanders, she said, have surprisingly never made the trip.

“We’ve been doing the horseshoe crab program and other events like it for years, and it gives people an excuse to get over to the lighthouse. This gem is right in everybody’s backyard,” she said. “I’ve been involved with the preservation society for 10 years and every week I hear, ‘I’ve lived on Long Island my entire life and have never been out here.’ We hold events like this really to bring people to the lighthouse. Education and preservation is the mission statement of the Preservation Society.

Visitors to the lighthouse enrich not only themselves when they visit, but also the lighthouse itself. Although it lies on National Park Service land, everything the lighthouse team does is self-funded through tower tours and school programs. Community involvement, she said, is imperative to ensure the lighthouse continues to flourish.

As the art contest and touch tank wound down, National Park Ranger Dave Raymond took the stage for a brief presentation on all things horseshoe crab. He began with fun facts such as the creature’s closer relation to spiders than crabs, their ancient ancestry dating back 450 million years, and their importance in medical matters such as vaccines and equipment sterilization.

Raymond also expressed concern for the ancient creatures, as he went into detail about their dropping numbers around the United States.

“The crabs are in trouble, especially here in the New York area,” he said. “Their numbers are down and they are considered a species of special concern by New York State, who will be monitoring them more closely.”

Raymond said this is due to factors such as habitat loss from things like bulkheads, which prevent horseshoe crabs from reaching beaches, various types of pollution, and predominantly – fishing.

Because they have been popularly used for bait by private and commercial fishers alike, they have earned special privileges in states such as Delaware and Virginia, who shut down fisheries when they saw populations dropping. While numbers in their area have began to rebound, Raymond told attendees that it has negatively affected New York horseshoe crab populations as fishers travel north for them.

“Horseshoe crabs are under a lot of pressure right now, and this is where you all come in – please help spread the word about how important it is to save the horseshoe crabs,” he urged. “Fire Island’s boundary goes 4,000 feet out into the bay. We shut down fishing for horseshoe crabs about 10 years ago, so hopefully our waters will serve as a nursery to repopulate the bay.”

As promised earlier in his presentation, Raymond followed his talk in leading attendees down to the bay, where they were able to seek out the horseshoe crabs in their natural habitat until sundown. Overlooking a pink and orange sunset, the crowd assisted him in searching for the creatures, which they managed to find a few of, and continue learning about.

Raymond says the best time to go searching for horseshoe crabs on your own is at nighttime during May and June, within a few days of the new or full moon at high tide on any beach close to you. Raymond, the National Parks Service and all those at the Fire Island Lighthouse encourage horseshoe crab-seekers to treat them respectfully and ensure they remain undisturbed in their environment.