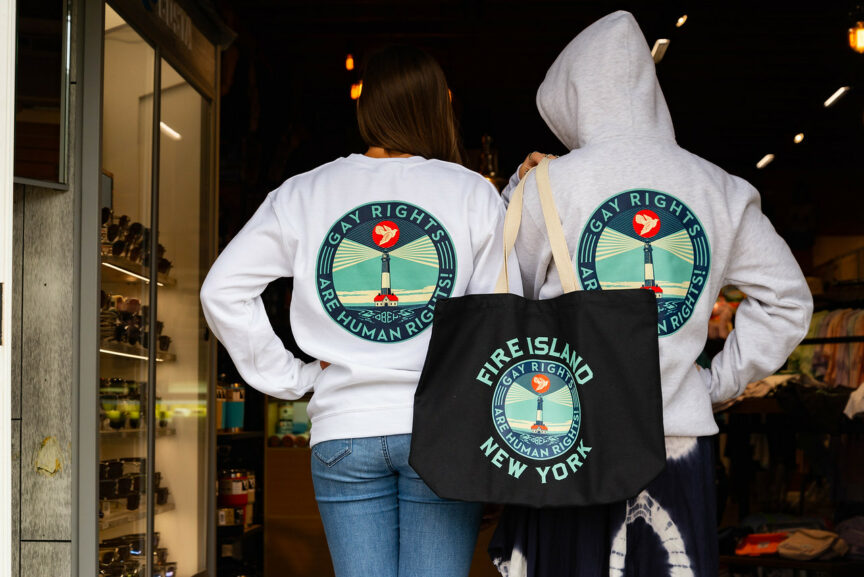 With Pride month here, community members are readying for celebrations, both on Fire Island and elsewhere. As owners of FiveEight- Three and the other Fire Island Apparel stores of Ocean Beach, Lindsey and Sean Klentzin felt the need to contribute something of their own. Finding inspiration in the 50th anniversary of the Stonewall riots, they commenced their creative journey; their simple idea would turn into a global project.

In collaboration with clothing company Obey, FiveEightThree has launched a line of apparel with a logo declaring “Gay Rights are Human Rights!” personalized with a Fire Island touch – an image of a beaming lighthouse.

“We’re year-rounders out here, and we love everything about this island. A major thing about it is its inclusiveness. We wanted to generate some money to give back to the community,” said Sean. “We were brainstorming ideas, and one of the things we kept coming back to was the lighthouse. Each Fire Island community is different in its own way, but we’re all very accepting and we’re all under this one big lighthouse.”

And so, the two reached out to the legendary Shepard Fairey. The graphic artist is best known for his instantly recognizable “Hope” posters that went viral during Barack Obama’s historic presidential run in 2008. Fairey is also the founder of Obey Clothing, and eagerly accepted the project, and decided
to use the idea for his Global Awareness Campaign. The message will not be limited to the streets of Fire Island – stores in Japan and Europe will have their own versions of the design with the same message to sport.

While Obey planned to launch the design on June 6, FiveEightThree, Bambootique, and Fire Island Outfitters got the go-ahead to release the apparel both online and in-store. For Fire Island, the campaign is already in full swing.

“Even though Ocean Beach isn’t technically considered a predominantly gay community like the Grove and the Pines are, it doesn’t mean we shouldn’t be supportive of our neighbors,” said Lindsey.

However, the celebration doesn’t stop there – the campaign will extend to the Gay Rights Awareness Fundraiser and Launch Party at Island Mermaid on Friday, June 21, at 9 p.m. All funds collected from the event’s apparel sales, raffle ticket sales, and $20 entry charge will go to Pride for Youth, a Long Island-based service and advocacy organization for LGBTQ youth.

“We feel like we were given such a gift with this opportunity, and we are going to do as much as we can to continue these efforts throughout the whole summer,” said Sean.