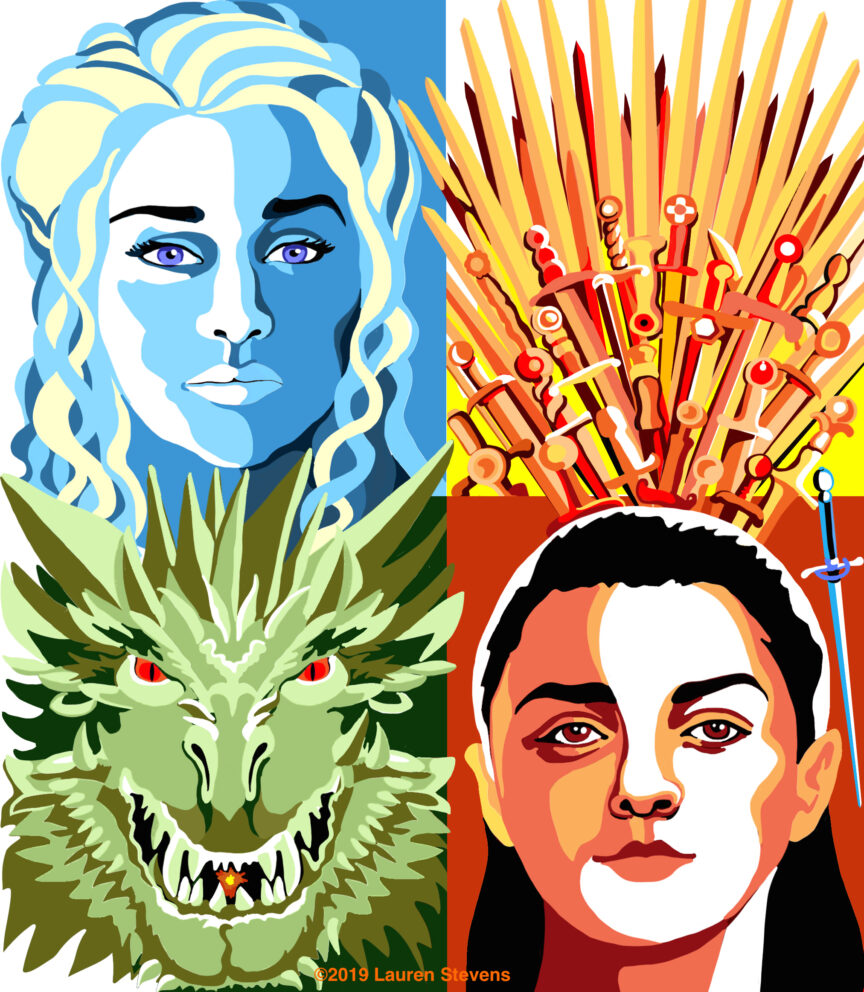 My fellow Westerosi: I will not deny the legitimate criticism of the GOT series finale. No matter our diverse opinions, or desired endings, we can all agree that Seasons 7 and 8 have been cruelly rushed. The let’s get this over with mentality is symbolized by errant Starbucks cups and plastic water bottles. If the producers lost the fire in their belly, they should have exiled themselves to the sea, and let someone who still cared assume control. If the suits at HBO cut the budget and pressured the production schedule, they should burn in seven hells.

Nonetheless, sparks of George R.R.’s brilliance still flicker within the smoldering funerary pyre of this finale. So let’s explore a few aspects of the finale, which are as well-conceived as some of GOT’s final plot twists.

Daenerys Did Break the Wheel: She believed it her destiny, and indeed it was. But in the Seven Kingdoms all the best laid plans get turned on their head, and nobody gets what they wanted (except apparently, Sansa). The Dragon Queen envisioned herself leading the New World. Instead, her role was to usher out the Old World. The Mad King’s daughter grotesquely revives Aeon’s dark vision, with an atrocity so horrific it stands out even by Westeros standards. In creating the last great massacre of the Old World, she engenders a scenario in which a war-weary world finally chooses options that do not involve mass slaughter. The carnage to end all carnage (hopefully) brings the lords, ladies, and even Dany’s fiercely loyal and very pissed off General Grey Worm to consider negotiation over annihilation. And so the endless cycle (wheel) of war breaks. A younger Westeros was a place where the power vacuum left by King Robert’s death quickly resulted in the War of the Five Kings. Eight years down the corpsestrewn road, the same Kingdoms all pause to consider non-lethal options in the wake of Daenerys’ and Cersei’s consecutive deaths.

If the Game ultimately drove Daenerys crazy, it was a short drive: Dany doesn’t require descent into madness, and she doesn’t really snap. She’s just getting her Targareyn on when she incinerates the citizenry of Kings Landing. Tyrion encapsulates it for us, observing that when Dany slaughtered and crucified slavermasters by the thousands in Slavers Bay, we cheered her on because those were evil guys. Roasting the army of the dead was also on the plus side. We have troubling concern when she incinerates Sam Tarley’s father and brother, but hey, war is hell and Sam’s father was a jerk anyway. So we’ve known all along that Dany’s good at, and never remorseful about, killing. When she reaches King Landing to play the winner-take-all round, she plays to win, selecting the speediest path to the Throne with all the ferocity she deems necessary. (Which is considerable.) That brutal Daenerys was standing in plain sight the whole time, she just stepped into different lighting. We assumed she’s mostly into killing bad guys, but it’s really more of a guideline than a hard rule. Yet we comprehend why Jon Snow doesn’t see her nature until it’s completely manifested in fire and blood.

Was Daenerys death just too darn quick and easy? It sure feels that way, but maybe not so much. Perhaps she’s spent the last eight years chasing her destiny, which, now achieved, makes her expendable. Let us remember the death of Beric Donddarian, when Melisandre the Red Witch tells Arya, “The Lord of Light brought him back for a purpose. And now that purpose is served.” This happens all the time in Westeros: Jorah Mormont completes his destiny saving Dany – then POW – he’s dead! Night’s Watch Commander Ed Toilet completes his destiny saving Sam Tarly on the battlefield – then POW – he’s dead! Milisandre herself completes her final task at Winterfell – POW – dead. Fate is a harsh mistress in the Seven Kingdoms, and once she’s done with you, you’re usually toast.

There’s classic GOT worthy symbolism: Daenerys walks up to her long sought throne and touches the pommel of one of the swords. But these are the swords of the vanquished. The Iron Throne is both a prize and a curse. Having finally achieved her triumph, hand upon the sword of defeat, her nephew/ lover and greatest vulnerability enters the scene to plant the kiss of death.

And there’s a moral to the story: While it’s painfully dull to watch the aristocracy in what amounts to a town hall meeting to vote in the new community board, it’s a pain that must be endured for the future of the Kingdoms. Just as Medieval Europe had its Renaissance, so the Seven Kingdoms finally takes its first baby step toward something … somewhat less Medieval. Sam even suggests that maybe everybody should have a say in his or her own future. While this idea is derided, the seed is planted. Insert cliché here: Every journey starts with a single step.

After all the carnage of countless extras, and the death of approximately 82 percent of the main cast, this saga has the audacity to end on a downright optimistic note. The Kingdoms getting together to elect a king is, by Thrones standards, a shockingly happy ending. So as we wander back to real life we are reminded to never go all-in for any leader, no matter how charismatic. Get yourself a nice constitution structured to discourage power from concentrating in one central source.