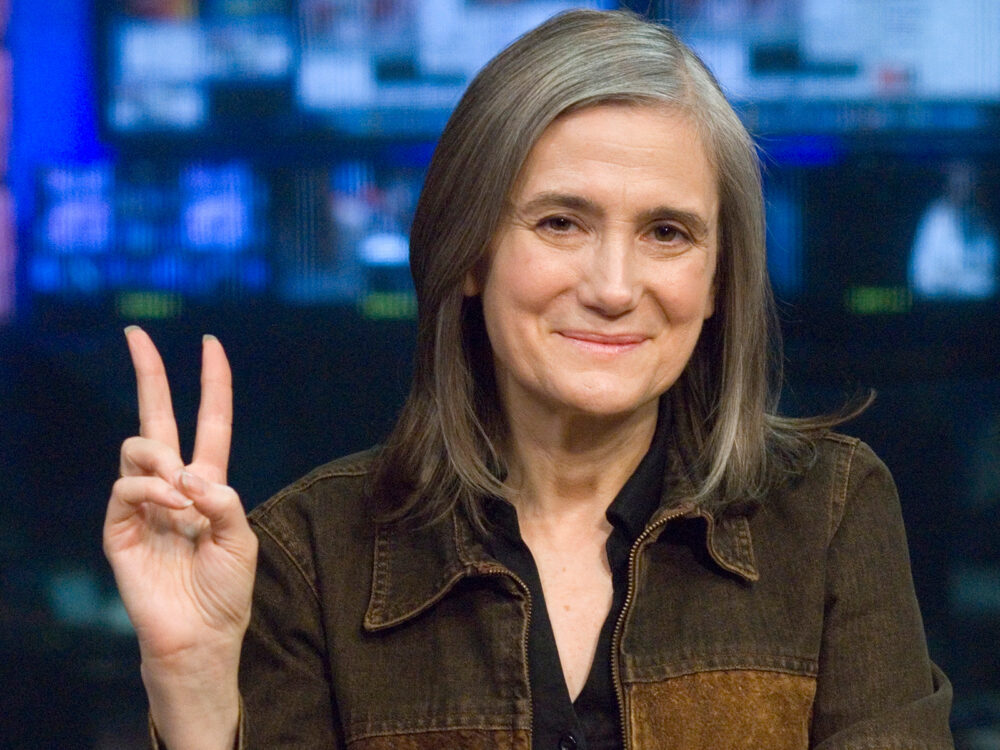 Amy Goodman, the longtime host of the independent broadcast “Democracy Now!” is world renowned for exposing hidden truths at her own risk, such as when she was arrested for covering the Standoff at Standing Rock in which Native Americans protesting the construction of an oil pipeline near their North Dakota reservation were attacked. She’s also a Bay Shore native who spent time on Fire Island growing up. In a recent interview, Goodman shared memories about growing up locally, and her thoughts on the importance of independent journalism. 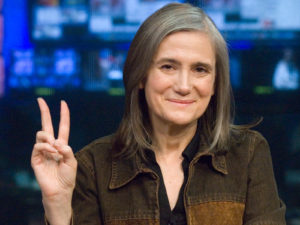 Fire Island News (FIN): How did growing up in Islip and Bay Shore shape your worldview?

Amy Goodman (AG): It had an enormous effect. I went to school at Sherwood Elementary in Islip, and then to Bay Shore Middle School and Bay Shore High School. I spent a good amount of time on Fire Island in summer. I had friends who lived in Dunewood and Fair Harbor, and I worked as a waitress to make money for college after my senior year of high school at Maguire’s. I think I was the first girl waitress. I went over there to see if I could waitress, it was toward the end of the summer and they looked at me and they said that they’d give me a chance and well, it was quite an experience because it was my first time waitressing. But being in Bay Shore and Islip…and going through the public school system was very important. My dad was on the Bay Shore-Brightwaters Public Library board and all of these public institutions, public education all of these public spaces I treasured. It was my access to the world. My mom taught women’s literature and women’s history at local colleges like Dowling, Suffolk Community College, and Adelphi. My parents were great influencers of my life. My dad was a local ophthalmologist in Bay Shore; he was also a member of Physicians for Social Responsibility… And that consciousness about the importance of being an active citizen, both of my parents, and being active in the world growing up, was very important for me and my three brothers.

FIN: Do you have memorable stories that you could share from your first, your most recent or any other notable visits too Fire Island?

AG: I haven’t been there so recently…we would just go over to the ferry and when I was waitressing at Maguire’s I would waitress at night but we had to set the tables in the morning, so I took the ferry four times a day. I would go back at night and in the morning, I would go to set the tables, come back and waitress at night. And I just loved the ferries. Getting a chance to look at my community from a different perspective, as we would leave the island and head to Fire Island. For me, in the summer, it was just a place of peace – A place to reflect, to have fun, to appreciate nature. And I also loved to run, in Bright-
waters I would run along the canals and the lake in Brightwaters, and then on Fire Island just swimming in the bay or the ocean and it was just a very warm place in my heart.

FIN: What changes have you notice about FI since then?

AG: I haven’t been back in a long time…but I certainly know about the effects of climate change on Fire Island. And how important it is that we protect this barrier beach. That we care about climate change because we certainly feel the full effects of it on Fire Island. So, it’s interesting to be a daughter of Fire Island and Bay Shore and now as a journalist to, for example, cover the UN climate summit. I’ve gone to every one from 2009 in Copenhagen to Cancun to Durban to Doha, Poland, Peru and Paris. I host a daily global news hour called “Democracy Now!” on 1,400 public television and radio stations around the world, and climate change is a huge focus of ours. And particularly interesting this time when current President Donald Trump has pulled the United States out of the Paris Climate Accord. I think that going back to my days growing up and spending my days on Fire Island I just have a deep appreciation for the fragility of the ecosystem and how much we have to respect these greater natural forces and not speed up the process of the destruction of the planet.

FIN: Since you founded “Democracy Now!” 21 years ago to tell the stories left untold by the mainstream media, how has the mediascape gotten better or worse?

AG: We began in 1996 as the only daily election show on public broadcasting, and we were on nine community radio stations at the time… when the election happened we were going to pack our bags and move on to another project, but the people wanted the show more after the election than before because we were focusing on the grassroots movements, so the show only grew. Based in New York City, we continued to broadcast until that week of Sept. 11, 2001, the terrible attacks on the World Trade Center. We were the closest national broadcast to Ground Zero. In fact, in Bay Shore, we lost people at the World Trade Cen-
ter. Chris Quackenbush was one of my classmates growing up at Bay Shore High School who lived on my street on South Windsor Avenue. He died at the World Trade Center, among so many other people. That week, we were coincidentally supposed to go on a first TV station, Manhattan Neighborhood Network, a public access TV in New York City, and we went on as emergency broadcasting and then TV stations all across the country asked if they could broadcast “Democracy Now!” And we’d send it out FedEx, because it was breaking news, by videocassette. That certainly dates us. And then the NPR stations in a town would say, can we run “Democracy Now!” And then the PBS stations would say, can we run “Democracy Now!” Now we broadcast on over 1,400 public television and radio stations around the country and around the world on satellite television as well as on both Dish Network and DirecTV on Free Speech TV and Link TV. It is just explosive growth, a station a week picks us up. We just went on about 12 PBS stations in the last few weeks. I think it’s a testament to the hunger for independent voices. “Democ- racy Now!” is committed to bringing out the voices of the people at the grassroots. And we don’t bring you your typical pundits that you get on all the corporate networks. You know, those pundits who know so little about so much explaining the world to us and getting it so wrong?

FIN: You’ve published and broadcast a long list of hard-hitting pieces of investigative journalism in your career, but is there a single work that you consider the most important or impactful?

AG: I really can’t choose one. It has been an honor to cover the standoff at Standing Rock. Covering this era has been so important, the era of Trump and the resistance to it, giving voice to people at the grassroots. Decades ago, I was in a place called East Timor, which is 300 miles above Australia, survived a massacre there along with my colleague, Allan Nairn, who was writing for The New Yorker at the time. And then we did a documentary called “Massacre: The Story of East Timor.” Survived a massacre where Indonesian soldiers using U.S. M-16s gunned down over 250 Timorese. And that really taught me a lot. We ultimately survived, but the horror of seeing so many people gunned down…what I saw there, how important it was that we be there on the ground. That the Indonesian military would have denied that the massacre had taken place if they didn’t have to answer to Western journalists who had witnessed what had taken place. And also we had pictures. And how critical it is, especially coming from the most powerful country on Earth…that we reflect back what is done in our name in other parts of the world. Not to mention what’s happening here at home.

FIN: Are there any misperceptions about you that you’d like to clarify?

FIN: Is there anything else you’d like to add?

AG: Just that our job as journalists is to go where the silence is, to provide a forum for people to speak for themselves. There is nothing more powerful, whether it’s a Palestinian child, or an Israeli grandmother, whether it’s an elder from the Standing Rock Sioux Reservation in North Dakota or an uncle in Afghanistan, hearing some describe their own experience – I’m not saying you’ll agree with them, how often do we even agree with our family members? But you begin to understand where they’re coming from. And that understanding is the beginning of peace. I believe the media can be the greatest force for peace on Earth. Instead, all too often it’s wielded as a weapon of war. And that’s why we have to take the media back.