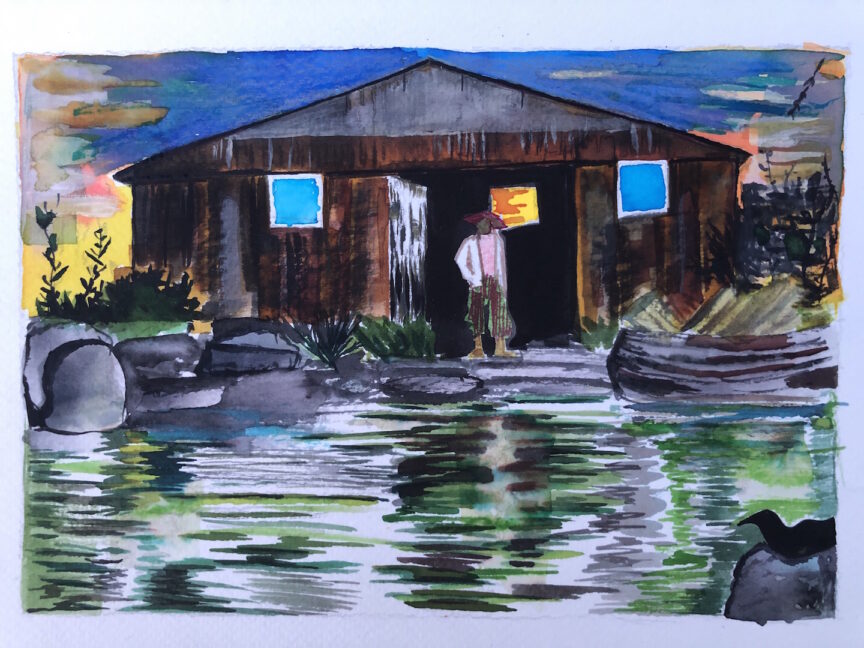 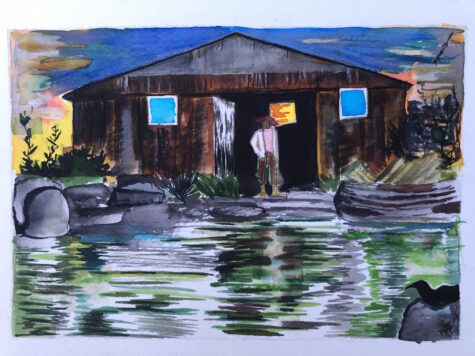 Fire Island lore abounds with stories of pirates, ship wreckers and smugglers. Historians documented reports of piracy on Fire Island at the end of the 17th century. King Charles II ordered its suppression by patent holders on Long Island, including the “Great South Barrier Beach” with its end point at Fire Island Inlet.

One legend is that a notorious land pirate, Jeremiah Smith, was the earliest resident of today’s Cherry Grove. We know from documents held by the Suffolk County Historical Society (SCHS) that a certain Jeremiah Kirkland Smith was born on Sept. 15, 1773, in Smithtown, Suffolk County, Long Island, New York. He worked as a farmer in Dix Hills and Clay Pits in Huntington. He later lived in Islip. Smith relocated to Fire Island for a period of time and ended his years in Patchogue, dying in 1860.

Douglas Toumey, a prolific author of history essays for the Long Island Forum (1938-2004), wrote several articles on pirate history. In “Fire Island’s Lone Wolf Wrecker” (1958), Toumey gives the reader an admittedly “part true and part legend” account of Jeremiah Smith with little clarification of what is truth or fiction.

Jack Whitehouse in “Fire Island: Heroes & Villains on Long Island’s Wild Shore” (2011) suggests that Smith’s probable occupation was as a guide to hunters and fisherman visiting Fire Island. He may also have provided them with rough shelter and some form of sustenance.

Ned Smith, a curator in 2013 at the SCHS research library, shed light on the identity of Jeremiah Smith. Jeremiah was from a family sometimes called the ‘Seversmiths’ – the progenitor was a Dutchman named Claus Severts Smith who settled first in Connecticut and later in Huntington. Ned’s account derives from a draft manuscript (circa 1875) by Samuel Arden Smith (neither Smiths are related to Jeremiah).

As a boy Samuel stayed at Jeremiah Smith’s Fire Island domicile in the 1810s and later wrote his reminiscences. The house is described as being on “the Beach at Fire Island…opposite and south of east Island,” and of simple construction; a “resort for fishers and gunners.” Guests slept on blankets spread on the floor.

Samuel’s text includes a transcription of E.S. Mulford’s oral history of “Uncle Jerry (Smith)” of South Beach Patchogue (born in Suffolk County, Long Island). Mulford (a grandson) describes the real Jeremiah Smith’s honesty and courageous assistance at shipwrecks. A fisherman and raconteur of tall tales – even about “mermaids.” Historians view these types of first-person narratives as authentic, but with caution regarding their complete accuracy.

Jack Whitehouse argues that the infamous biography of Jeremiah Smith is likely a fiction. A composite character borne of local legends cobbled to the stories of real life adventurers to Fire Island. One adventurer was William Post Hawes (1803-1842).

Hawes, a New York lawyer, was also an avocational writer of Fire Island yarns. He crafted them from personal experiences, historic facts and fictional lore. Long Island local papers and the New York press popularized his fables. He wrote under the byline J. Cypress, Jr., a pseudonym. From a collection of his short stories, “Sporting Scenes and Sundry Sketches: Being the Miscellaneous Writings of J. Cypress, Jr.,” (Forester, 1842) one first encounters the fictional “Jeremiah Smith” upon whom Fire Island legends were built.

Smith is introduced in “Fire Island-Ana”; or a “Week at the Fire Islands” [“Ana” being a collection of short stories].” He (with a wife) is “a keeper of their majesties, the people’s, lighthouse, adjoining his own tenement,” at “Raccoon Beach.” He is further described as “the only householder upon the island ridge” where he provides shelter and sells “spurrets and things accorden,” to island wayfarers. Identifying the location of “Raccoon Beach” and the real Jeremiah Smith’s domicile occupied the research of the historians mentioned earlier.

Smith appears again in “The Wrecker of Raccoon Beach; or, The Daughter of the Sea.” “J. Cypress” appears in Wrecker as the narrator. “Cypress” tells us Smith built an “Esquimeaux-like hut” for shelter later expanded with salvage from shipwrecks into several rooms, one with ships’ windows and a garret. Plundering of shipwrecks and lethal dispatching of survivors is narrated with dry humor. Smith marries a mermaid and they have two aquatically-gifted children.

It is very likely the pseudonymous J. Cypress, Jr. visited Fire Island as William Post Hawes sometime after 1826 (the year the first lighthouse was built). Geographic and topographic details of the barrier beach and its inhabitants are accurately described. He may also have benefitted from fireside chats with the master teller of tall tales, the real Jeremiah Smith.

If Hawes did, in fact, sail to the Fire Island Lighthouse and visited the real lighthouse keeper, Felix Dominy (recounted in “Fire Island-Ana”), between 1826 and 1842 (Hawes’ death), then it could be there he learned about a man named Smith Oak[e]s. A very real land pirate and scurrilous character. The Brooklyn Daily Eagle (Jan 1848) identifies Oakes who, with his wife, owned of a “sort of public house” a mile or so from the lighthouse at Fire Island beach as of 1843. In other news the house is described as built from ships’ salvage. The “S.Oaks” (sic) domicile was still in existence in 1858, depicted at the “East Beach” fork of Fire Island inlet on a map of Islip and Brookhaven townships drawn by J. [John] Chace, Jr.

The Oakes family was suspected of preying upon the shipwrecked for many years. They were at the scene of the wrecked “Louisa” (1843). Three years later Mrs. Oakes wife is discovered selling property stolen from that ship’s captain in Brooklyn and New York City. The captain had taken shelter at the Oakes home at the time of the shipwreck. Newspaper accounts associate the Oakes with several other Fire Island shipwrecks of the era.

It appears that Hawes developed in “Wrecker” a means to warn potential shipwreck victims, wreck masters and mainland police of land piracy occurring near the Fire Island inlet. As a lawyer he knew to protect his sources, avoid charges of libel and the inadmissibility of hearsay evidence in a court of law. To get his cautionary tale into print, circumventing these obstacles, he wrote a “Roman á Clef.” The literal translation is “novel with a key.”

Real people are disguised as fictional characters in such stories. The fictional land pirate “Jeremiah Smith” substitutes for the actual Smith Oakes, also for the lighthouse keeper (and local informant?) Felix Dominy. Factual events – the pillaging of shipwrecks and murder of witnesses, take place in a fictional setting, “Raccoon Beach.” The author/narrator (Hawes) adopts a pseudonym “J. Cypress Jr.” to further transmute fact into fiction. Hawes’ principal characters with slightly altered names and occupations, and actual topographical locales, were well known to mainlanders at the time of his writings. These details, and more, are “keys” in the Wrecker narrative signifying the real land pirate (Oakes) and his factual location.

In a note to the editors who would publish his short stories, Hawes offers “part of the andro [man]-andgeo- graphy [area]” as requested to identify the person and his location. The editors claimed “scandal is afloat, and the wrong men are pointed at.” Perhaps one wronged man being the innocent raconteur, Uncle Jerry Smith. The Brooklyn Daily Eagle eventually exposed the brigand, Smith Oakes, and his accomplice wife. They ran a “sort of public house” (nearby today’s Saltaire) that certainly served “spurrets and things accorden.” Succeeding events would seem to validate any rumors or gossip circulating about this villainous couple during on-site research by Hawes for his Fire Island fables. Taken together with the manuscript by Samuel Adams Smith this seems to vindicate the unfounded piratical “notoriety and fame” of Jeremiah Kirkland (“Uncle Jerry”) Smith of Fire Island. A fiction accepted as fact for over two centuries.