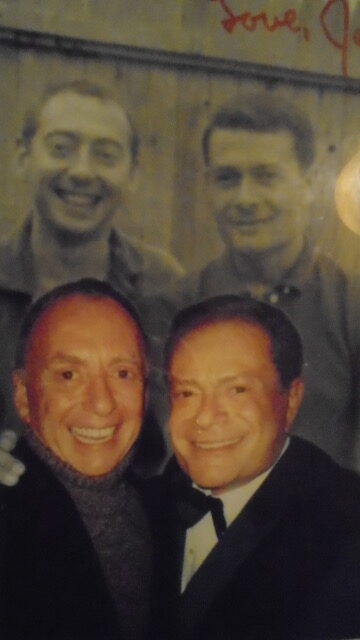 Me and Jerry through the decades on Fire Island.

By Robert Levine ~ Jerry Herman told me a story once about growing up in Jersey City. His fun-loving mother would make elaborate costume parties for any occasion. When he came home from school one day, he asked his mother what the occasion was. “It’s today!” she answered, and in time one of his most popular songs from “Mame” would be born.

Born on July 10, 1931, Jerry was considered a Broadway genius, alongside such greats as Cole Porter and Irving Berlin, both who also wrote their own music and lyrics. He had six major Broadway hits throughout his long and prolific career. Living in Cherry Grove in the late 1950s, he would accompany us at the piano for rehearsals, or with some singers in our local Cherry Grove Arts Project productions.

It was around then that he was working on his Off Broadway musical revue “Parade,” which opened at The Players Theatre in Greenwich Village in January 1960, produced by Lawrence Kasha, who kept a house in the Pines at that time. “Parade” would become a major Off Broadway hit, featuring Dody Goodman and Charles Nelson Reilly, who both went on to have wonderful careers on Broadway and TV.

I watched as his Broadway career started to take off. In 1961, “Milk and Honey” opened at the Martin Beck Theatre and had a decent run. In 1964, “Hello, Dolly” opened at the St. James Theatre, and won 10 Tony Awards that year, including Best Musical.

Jerry bought his first house in Fire Island Pines in 1964, which overlooked the ocean. He later moved to two other houses that overlooked the bay. While living in the Pines, Jerry loved nothing more than hosting elegant dinner and cocktail parties, many of which I attended.

Jerry also made history as the first composer-lyricist to have three Broadway shows to reach more than 1,500 performances, including “Hello, Dolly,” which in 1971 became the longest running Broadway musical of its time. Jerry owned a town house on West 11th Street where he hosted a party to commemorate the occasion. I had the pleasure of being invited to that party along with Broadway stars Carol Channing, Ginger Rogers, Larry Kert, David Merrick, and Ethel Merman.

Jerry was hot. His next hit was “Mame” with Angela Lansbury. He then wrote the music and lyrics for “Mack and Mabel,” “The Grand Tour,” and “Dear World.” He made history again on Broadway in 1983 with “La Cage aux Folles.” In 1998, he put together a Broadway revue, “An Evening With Jerry Herman,” starring Lee Roy Reams, Florence Lacey and himself. He wrote songs for many cabaret shows and for television specials.

Jerry lived with his a long-time partner Martin Finkelstein in Key West, until Martin died of AIDS in the mid 1980s. He then lived in Miami for many years with his partner Terry Marler, who now survives him.

Our country lost a living national treasure when Jerry Herman died on Dec. 26, 2019, but I also lost a very dear friend. He was generous, friendly, kind, and very unassuming. May his songs, legend, and memories live on forever.