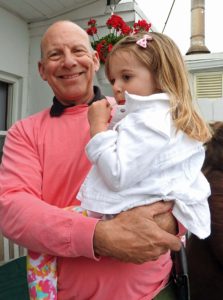 Tim Mooney with his granddaughter, Bethany/Bunny.

Kismet’s “season” has started — sort of. Opening night at Kismet Inn, on April 13, was celebrated in the way of the Great Tradition of “Water On.” Surf’s Out opened May 4 for Happy Hour and a celebratory birthday dinner for Paul Barbara with friends and family. Saturday, May 5, looked more like July with hoards of people crowding the downtown streets. Surf’s Out Pig Roast/Cinco de Mayo was a sold-out event with lines stretching down the dock beginning at noon. While the early celebrations went on downtown, some residents remained home to work and play. Michele and Peter Schlecter, sole residents of Camelot this weekend, spent hours gardening (and still made it to the Derby celebrations). Joe Beck celebrated his birthday with friends at home Saturday. I saw Cathy Scanlon bearing a delicious looking cake headed that way.

Although the Kentucky Derby didn’t kick off until 6:45 p.m., the Inn starting filling up around 4 p.m. Despite the cloudy, damp weather, many people stayed outside to chat until post time. Like the southern event, many sported hats ranging from Jeannie’s full flowers to Jane Mooney’s fascinator to the Derby themed fascinator worn by Karen Burke to a few 2-foot high sombreros from the Cinco de Mayo party. Ken and Laurie Bellafiore were lucky informal betters. In the midst of all this, Kismet Fire Department unveiled their sweatshirts – black this year. They proved a very popular item.

The next week was generally sunny. Between jobs, Jimmy Sposato took advantage of the warm days to get his home’s beautiful landscaping in shape. I opened windows, turned on fans, changed into shorts and sandals. Oops! For the weekend – Mother’s Day weekend – grim forecasts lived up to their expectations. Welcome to a Fire Island spring.

Seriously, welcome and welcome back to all. As always there is a lot of work going on, remodeling and repairing houses. The contractors have been playing their annual “Beat the Clock” for weeks. As always, seasonal homeowners found many surprises as houses were opened after the long winter: dust and dirt of course; a few broken pipes; bicycle tires gone flat; and fences, branches and even whole trees blown down. The most universal issue was getting television service reactivated. Direct TV service techs were seen – or not seen – on all the streets. To those who never left, congratulations on making it through a tough winter. Thanks for those cheerful Facebook postings of the Christmas tree, the snow and fire department members dressed for shoveling (or outdoor camping). A note to all: It gets better. The Kismet Fire Department Auxiliary is full of plans for community events including a Comic Night and a Kismet Community Day. Details in upcoming columns.

Meanwhile, the pace of life is picking up. A home sold on West Lighthouse near the beach and the Mayer house is in contract. People are really pleased with the new concrete dock and shiny black fence. It’s a lot easier for rolling wagons and there’s more space for ferry deliveries.

Congratulations to Skylar Epstein for being accepted at George Washington University.

Some of you know of Michael “Mugsy’s” recent cancer and chemo. I spotted a poster in the Inn announcing a fundraiser to help him and his family defray the horrendous costs. It’s sponsored by a new charitable organization – This Bud’s for You – organized by Claire Rose Foods and South Shore Business Owners. The event will be at the Inn on Tuesday, June 5, from 1-5 p.m, . with food, drink and live music.