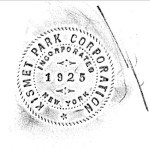 Starting a community out of nothing. Literally nothing. No houses, no hotels, no restaurants, no boardwalks, nor even a semblance of a path. No people, no businesses, nothing. Nothing except low bushes, poison ivy, beach grass, and sand. Lots of sand.

Imagine finding a vacant parcel of barrier island property, available for purchase from the Sammis Estate, which is referred to as “Partition Lot 3” of Fire Island. The land ran from bay to ocean — approximately 2,000 feet long. It would have been 400 feet wide, but the telegraph station tower, located near the ocean, was standing on its own acquired slim 50-foot wide strip of land, sliced off the original. Still with a little money, a lot of foresight, a terrific imagination, and a wonderful work ethic, this master craftsman, this master of all trades, this Mr. Frederick W. Weis Sr., gambled on himself, his sons, and his dream. He succeeded in creating his very own destiny: Kismet.

First, in 1924 Fred Weis Sr. bought the M.V. Kismet, which had been built in 1920 as a ferry for West Island, and was owned by Mr. Thompson. Weis did not need to name it, as Kismet was perfect. After all, he was a Shriner, a member of the Kismet Temple. He and his three sons, Fred Jr., Herbert, and Cliff, joined him to go on a searching expedition for investment property on Fire Island. They considered a new community, Fair Harbor. Fortunately, Fred Sr. looked to the west. He saw Saltaire, which was a new village that began in 1911, and then a vast nothingness. And, in the remote distance, there stood one lone lighthouse with its adjacent Keeper’s Quarters.

Why own a ferry just to take people to someone else’s community? Why not start his own community? “We’ll name it Kismet, after the boat.” 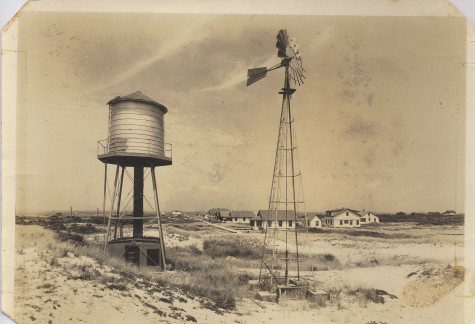 2. The original Kismet water tower with houses in the background, year unknown.

Others had attempted to conquer that vast nothingness. Years before, in the mid-1800s, there had been a few very successful ventures into luxury hotels as vacation wonderlands, right near the Fire Island Lighthouse. The most well-known was the Surf Hotel owned and run by David S.S. Sammis. Another was on a smaller scale, run by Felix Dominy, a former lighthouse keeper.

And, in the future years following, two other blank parcels of land very near Kismet were purchased. The first parcel, in 1956, was called Lighthouse Shores and was situated just west of Kismet. It was comprised of East and West Lighthouse Walks. The other parcel, a few years later, was named Seabay Beach and was located to the east of Kismet. It contained only Seabay Walk. The three segments are considered the Tri-Communities, with Kismet as the accepted label; technically Seabay Beach, separated from Kismet by a narrow strip of the Fire Island National Seashore, was still considered a detached entity as of the 1991 listing of the National Seashore.

Finally, as recently as the 1970s, Fire Island property owner John Hill went so far as to ask for a State Supreme court order directing Town of Islip officials to issue permits allowing him to build 30 homes on property he owned at Ivy Beach, west of Kismet Park, running from the Great South Bay to the Atlantic Ocean. This unimproved strip of property had been purchased in 1972, long after the Fire Island National Seashore had completed its rulings in 1964. It was denied.

3. Very early Kismet, probably still 1920s. The general store is without words on the building. This building was converted into the Kismet Inn after the Hurricane of 1938.

So, to return to 90 years ago, in 1925, that 50-year-old Brooklynite Fred Weis had sold his laundry business and retired. He then moved to Bay Shore and bought a ferry named Kismet. He wanted to invest in a real estate venture. And voila! A community had begun out of nothing.

Actually, such a transformation was not magic. It required hard work and determination to succeed. His sons were young and strong and able bodied. At that time, Fred Jr., the oldest, was about 30, the middle son Herbert was 24, and the youngest, Clifford, was 18 years old. It must have been difficult to figure out how to build a community and to know what steps should be accomplished first. They seemed to have a mental time table!

Bob Weis, son of Clifford Weis, shared his father’s notes and letters with me. Cliff wrote:

Only then did the Weis family begin to build. Starting in 1926, they erected some buildings from scratch, and they also utilized a wonderful short-cut by purchasing Aladdin mail-order house kits. Mail-order architecture was one of the most common building practices in early 20th century subdivisions. The company prepared, sold, and distributed their prefabricated home kits. So did the better-known competitors of Sears, Roebuck and Company and Montgomery Ward.

First you would order the color catalog. Then you would pick a style you liked, add extras like interior trim, plumbing and heating systems, and possibly other accessories, total the bill, and order it. The kit would be shipped from Aladdin’s factory in Bay City, Michigan. When it finally reached its destination, a local highly skilled carpenter erected it. In Kismet, that was the Weis family. The original layouts were unadorned cottages without electricity. This was not a problem on Fire Island since, as Cliff Weis said, “LILCO [Long Island Lighting Company] came to Kismet and Saltaire in 1937.”

Kismet was almost demolished by the Hurricane of ’38. Flo Brown, Cliff Weis’s mother-in-law, wrote a letter to her daughter, Belle, right after the destruction. In it she said, “I do not suppose Cliff and Herbert will rebuild. That I should think would be almost too much after the years of hard work especially when there is a chance of the same devastation again.” Nevertheless they did start again, and this time it wasn’t to create a community out of nothing. This time there were some remnants that would be able to be salvaged — needing the same requirements: A little money, a lot of foresight, a terrific imagination, and a wonderful work ethic, and these sons who had, courtesy of their father, learned to be masters of all trades. 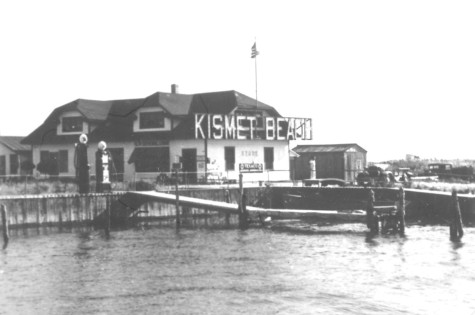 Thanks for the history lesson. Good stuff!

Fascinating story. I grew up on FI and worked at the ‘Inn in the 70’s.

I spent most of my childhood summers in Kismet. They were magical. I am so happy to learn about its history. Thank you!

While looking through the photos of Fire Island I came across a photo of the dock where some boats were moored and low and behold I think I spotted Captain Blueberry’s magnificent Warship.
Gary

Now I know how KISMET came to be.
What a beautiful place to live.
Thank you very much for sharing this
Gary Barnard

Wow! Fascinating to hear how part of FI actually came to be. Really enjoyed this, Cheryl.

Wonderful and very informative! Love her stories as so well researched.